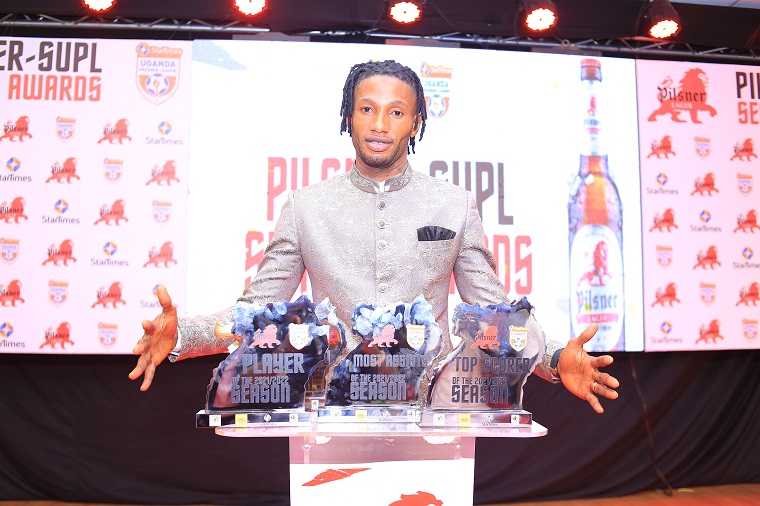 Cesar Manzoki with his awards

Vipers SC striker Cesar Manzoki did not believe his nickname in the Uganda Premier League (UPL) of “The Emperor”.

As per that title, Manzoki, who inspired his side to the 2021/22 championship, went on to conquer the Pilsner UPL 2021/22 season ending awards too. Manzoki, who is a Central Africa Republic (CAR) international of Congolese descent was the first foreign player, to be voted best player in Uganda’s top flight league in history. Yet, the unprecedented manner in which he did it, scooping six of the 14 awards at the ceremony, probably suggested what a gem he was.

Striker Yunus Ssentamu, who scored 14 league goals for Vipers, four short of Manzoki’s mark told The Observer that after his first season, the 2020/21 one in Ugandan football, where he laboured a bit, he realized what he had to do, to get better.

“And I can tell you, that Manzoki puts in a lot in training, that has contributed to our success,” Sentamu said.

Keeping Manzoki at Vipers is high on the agenda if they are to make a mark on the continent next season.

“I have to work even harder now, because of the standard I have set. It will be bad if I drop my level. Being recognized is simply a huge motivation going forward not to let up,” Manzoki said.

On the other hand, Vipers and Cranes midfielder Bobosi Byaruhanga had an interesting view of Manzoki, following his dominance of the UPL awards. Byaruhanga said Manzoki is more than just a good footballer. But a good human being too.

“His inter-personal skills are great. This is a guy, who will encourage everyone, when they are at their lowest. He is the kind of person, who brings people together, and that has helped a lot in building our team spirit,” Byaruhanga, Fufa/Airtel Player of the Year 2021 said.

By and large, Manzoki has appeared to be the kind of character that is not over-assuming. Even when he scored great goals in big matches, he remained grounded. Marcelo Cardoso, the Vipers assistant coach said that it was hard to question Manzoki’s overall contribution. Cardoso reasoned that while many people saw Manzoki as a good goalscorer, he also had many assists. He tied with team-mates Milton Karisa and Bright Anukani in most assists, nine.

Yet also, his work rate also provided the team’s first defensive line, and won for them so much possession, because of his willingness to chase and close down opponents. Put simply, according to Cardoso, considering Manzoki’s attributes, he was the ultimate team player, which possibly feeds into the suggestion, that he is the true gem.

However, while Mujib Kasule, a Fifa coaching instructor has another opinion of who should have been the season MVP, he credited Manzoki for his poacher’s instinct inside the penalty area. Scoring goals has always been Manzoki’s cup of tea.

At 25, Manzoki believes he is just getting started on the dream, and only has praise for his team-mates. Interestingly, he has been linked with several clubs outside Uganda, including Tanzania giants Simba, Rwanda’s Rayon Sport, Al-Hilal of Sudan and a couple from Saudi Arabia and South Africa’s Orlando Pirates going by recent speculation.

Yet, he insists that to him, it is not about money per se but being in a club that will enable him realize his full potential and keep him and his family happy. At the moment, Manzoki wishes his parents were still alive to witness his recent feat in Uganda. He can only dedicate his awards to them, he said!