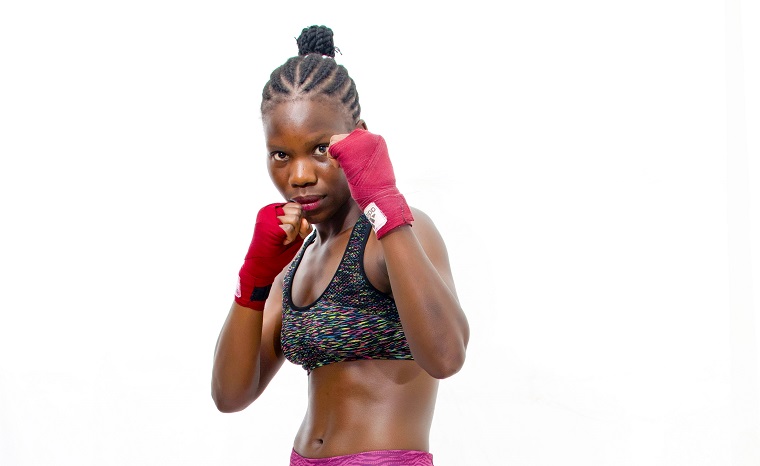 Boxing promotions company A&B will have Catherine Nanziri headlining their fights this Friday, June 24 at PTC Lounge in Bulenga off Mityana road.

It will be the first time that a Ugandan woman pugilist is lined up as the main fight, which is indicative of how far she has suddenly come. Nanziri, 22, faces Tanzania’s Sadra Muhammad in her second professional fight.

This is after she beat another Tanzanian, Husna Zamba in the first of a six-round fight back in April at the MTN Omondi stadium, Lugogo. It was a statement of intent from Nanziri, beating someone who had been a professional boxer longer than she had.

This is Nanziri’s first year as a professional boxer. She told The Observer that after representing Uganda at the Olympics last year, her next call to action, was leaving the amateur ranks largely because of how tough life was proving to be.

She explained: “The months leading up to the Olympics proved hard for me as a boxer, because it was a struggle making ends meet, and also facilitating myself to train as well as I would have wanted. Covid-19 caused a lot of disruption to our preparation for the Olympics. It was a situation that could have easily led one to quit.”

Yet, with perseverance, Nanziri, a super fly-weight (52kg) boxer made it to Tokyo. Unfortunately, she lost in the first round, meaning that her dream to get to the medal bracket went up in smoke. The general consensus was that the preparation she had got was not ample.

But that is part of the past now. Yet, in many ways, it is a foundation to her future. Because Nanziri is currently the best female boxer in the country, she was not short of suitors, that felt she could become a flagship for their brand. But also, she needed to start making a better living.

Having dropped out of school after her O-Level in 2017, a year after she had started boxing, Nanziri concentrated on doing food and catering work alongside her mother. But even that was not paying well enough.

She then saw boxing, not just as a mechanism to fight against the world’s odds stuck against her, as a school dropout. However, boxing is the kind of sport, she felt, that could take her to the higher echelons of society. Already, it has seen her board the plane to the far east in Japan.

“Right now, my focus is on becoming the best female boxer in my weight across the globe. But the only way I can achieve it, is by fighting my way up. I am not privileged. Therefore, I must do a lot of training, to get to the top,” Nanziri said.

First of all, the target is to become the East African champion, according to Nanziri’s manager, Acram Iga. “Nanziri has never been more hungry than she is currently. So, this is the right time to exploit the urge she has to become the best. We intend to get her as many fights, so that she gets to the pinnacle of African boxing in the shortest time possible.”

Furthermore, Nanziri’s projections could not be more clear. She believes that success in the ring is what can turn around her life. Despite her small body and young age, the hopes of her family are on her shoulders. Nanziri says that nothing gives her so much drive to work hard in the gym than the thought of her family.

For her to attract endorsements, winning is of the essence to Nanziri. But she also wants to go back and complete her studies. An opportunity to polish up her skills, and become a distinguished chef is well up on her to-do list. But to realize that, Nanziri has her eyes on what she must do this weekend, beat Sadra!