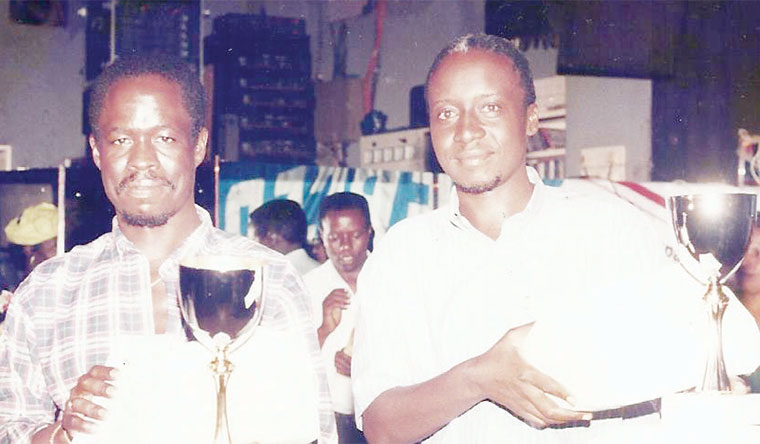 From the untimely death in 2021 of Hajji Twaha Kakaire to the loss of motor rally legends Jolly Lutaaya, Frank Nekusa and football greats Ibrahim Dafala and Moses Ndaula, it's only fitting that back to their legacies.

Lutaaya was a veteran businessman, sportsman and Buganda Kingdom loyalist whose death shocked many Ugandans. On the side of sports, the former rally ace was part of the top drivers in the 1980s who took the sport by storm.

Lutaaya, navigated by Friday Balimuttajjo, is remembered for always pushing his Nissan PA10 to the finishing point. His mentorship and generous heart towards upcoming drivers will always be missed.

The former captain of Uganda Cranes and Express FC, was tagged British as he was lovingly called. The classy defender was a cult at Express FC where he spent 13 years and won the two league titles consecutively between 1974 and 1975 as captain. Despite his poor heath, his death left the soccer fraternity in a sombre mood.

He was former general secretary of National Council of Sports (1992-2003), the former NCS points-man was a former cricketer and co-founder of top cricket clubs like Africa Cricket Club (ACC) and Tornado. The tough-talking and strict sports administrator died after a long illness.

He did not win many major titles in all the clubs he played for but Ndaula was a dominant figure and he is considered to be one of the best midfielders this country has ever produced. He featured for Coffee, SC Villa and Express in the 1970s, 80s and 90s.

However, the former star went into oblivion, leading a pauper life till his silent death in Masaka.

However, the soft-spoken veteran sports administrator was replaced by Denis Obua after the 1998 polls. Kakaire died
of cardiac arrest at Jinja regional referral hospital.

The rally ace rose to glory as a top navigator for top rally drivers like Sam Ssali, Gerald Kiddu and Karim Hirji. He navigated Hirji on his three consecutive National Rally Championships; he won in 1993, 1994 and 1995. He died of Covid-19-related ill- ness at Victoria hospital.

For KCCA FC faithful, Wandyete will always remain a legend, he spent more than a decade at Lugogo. His no-nonsense approach to the game in the 1970s and 80s earned him the tag ‘Umbwa Kali’. But few years before his death, he did not look fine until he passed on in May.

He was a university don but many knew Professor Kigongo as a football administrator who spent decades in refereeing where he officiated games, as well as managed the body which governs Uganda football referees. He was reportedly passed on due to heart failure at his home in Wakiso.

Kyeyago was a lover of football and he promoted it in Busoga sub-region. Kyeyago, who was a former MP for Bunya South in Mayuge district, also served as Fufa vice president during Dr Lawrence Mulindwa’s reign at Fufa.

He was a man of many talents, having played rugby, boxing and athletics on top level. Seguya is one of Uganda’s best rugby players of his generation; he died few weeks ago of leukaemia. He captained and coached Uganda Rugby Cranes. But he is best known for his association with Heathens where he won dozens of major titles.

A former athlete who represented Uganda in the 1992 Olympics Games held in Barcelona, Spain. He was part of that team which had Edith Nakiyingi, Francis Ogola and Emmanuel Lopeyok. He died of Covid-19-related illness.

He was an ardent Express fan who was tagged ‘Manager for life’ by the club’s faithful. He became Express manager during the club’s unstable management around 2013. He reportedly died of heart attack.