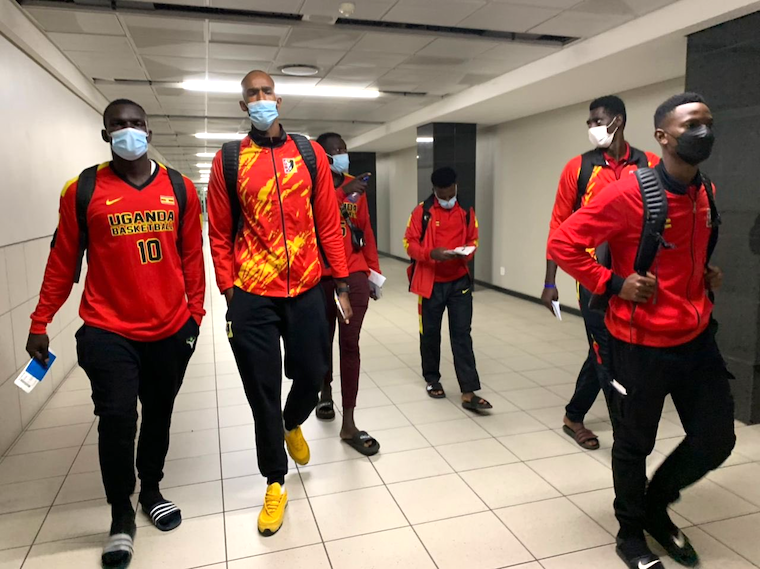 Silverbacks at O.R Tambo airport in Johannesburg before connecting to Angola

Uganda National basketball team, Silverbacks have finally secured funds and travelled to Benguela, Angola to participate in the anticipated first window of the FIBA World Cup qualifiers starting tomorrow November 26.
The team flew out of the country aboard SA Link flight at 3.30 today - ending the uncertainty that loomed over the team's preparations for the 3-day Group A games marathon against Mali, Nigeria and Cape Verde.
Until yesterday, the team was unsure of its participation in the games after the government categorically said there is no money for the qualifiers.
“The Federation of Uganda Basketball Association (FUBA) on a very sad note wishes to inform you that senior national men’s national basketball team the Silverbacks will not compete at the FIBA World Cup qualifiers window 1 in Benguela Angola from 26th to 28th of November 2021,” read an earlier statement.

“FUBA was informed by the Government of Uganda through the National Council of Sports (NCS) that there was no money to support the team for this particular campaign,” the statement added. Earlier on FUBA president, Nasser Sserunjoji said they needed more than Shs 380 million to participate in the games.
But in a statement issued today at 6.19 am, FUBA said ministry of Education and Sports intervened and provided the funds for the team to travel to Angola.

Uganda will have to finish in the top three if they are to advance to the next level. This is not the first time, the basketball team is struggling with funding.

During this year's FIBA AfroBasket 2021 in Kigali, Rwanda, the Silverbacks spent their tournament operating on credit. It took the intervention of the first son Lt. General Muhoozi Kainerugaba to clear the team's hotel bills.