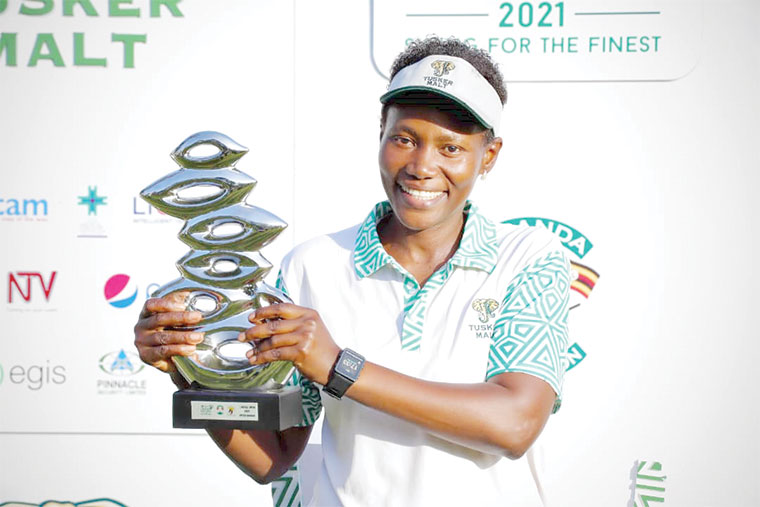 For the last seven years, Irene Nakalembe has been knocking on the door of the Tusker Malt Uganda Ladies Open Championship.

But with no success. She had been runner-up a couple of times but somehow, the Entebbe-based golfer couldn’t quite cross the finish line.

Last year, she finished third, eight strokes behind winner Martha Babirye and in 2019 she was second to the same rival after losing by a single stroke.

Last Saturday when she finally ended her Uganda Open jinx, there was a palpable sigh of relief in the air after a huge gallery followed the pressure group hole-by-hole from which she emerged champion after holding her nerve to outlast Kenya’s Mercy Nyanchama by three strokes.

“I am still lost for words,” a visibly overwhelmed Nakalembe remarked shortly after her victory. “I can’t put this excitement in words.”

She called it her greatest career achievement, ranking victory in the Uganda Ladies Open above her wins in Tanzania and Nigeria.

“I have ticked this off my bucket list but it wasn’t easy; we fought for this Championship for seven years and I give thanks to God.”

Nakalembe, who took home a glittering trophy, a trolley, a brand-new golf bag and other assortment of prizes, had started the day with a two-stroke lead going into the final round.

Golf connoisseurs have always rated Nakalembe as a dangerous player when chasing but the Saturday version of her proved she can equally be tough to catch once ahead.

Kenya’s Nyanchama showed tremendous nerves of steel by cutting the lead to one but her Open crumbled like a pack of cards once she triple-bogeyed hole 17, which is Entebbe Club’s toughest hole.

From then on, it was apparent that the Uganda Open crown was finally in the bag for Nakalembe. She credited her victory to her manager Yunus Bbale, who advised her to ditch using the driver on hole 5 during the day two round.

“His advice came in handy because I was hitting the three-wood so, so well and was finding fairways comfortably.”

Nakalembe is quite a long-hitter and her three-wood was on occasions landing further than shots of her rivals who were blasting drivers off the tee.

At the time Nakalembe was advised by Bbale to drop her driver, she had blocked her tee-shot into the woods on Friday. From then on, she didn’t touch it again.

“We agreed with her and I removed it from her bag,” advised Bbale, who has supported Nakalembe financially, particularly with her travels for international tournaments.

She also praised her coach Vincent Araali Byamukama, whom she credited for fine-tuning details to her swing and tournament temperament.

Nakalembe began playing the game of golf in 2008 and has established herself as one of the most dominant players of her era. Although she hadn’t triumphed in the Uganda Ladies Open before, Nakalembe is notoriously difficult to beat on the par-71 Entebbe Course where she has lifted the last seven Entebbe Ladies Open crowns.

But she is not always invincible in Entebbe as the 2018 Uganda Ladies Open showed. She finished third behind Babirye and eventual winner Tanzania’s Neema Olomi.

Since then, the golf world had continuously wondered whether Nakalembe would ever acquire the mental mettle to triumph in any Uganda Ladies Open championship.