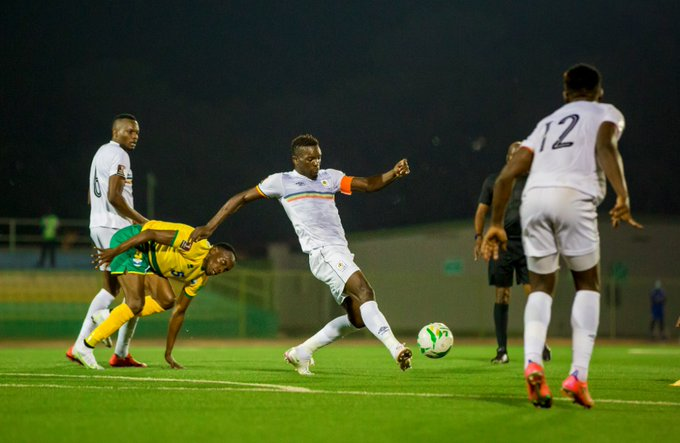 Fahad Bayo’s lone goal helped the Cranes to sail past Rwanda in a mouth-watering clash played at Nyamirambo stadium in Kigali, Rwanda on Thursday evening. This was Uganda’s first win in the Group E World Cup qualifiers. Rwanda kicked off the game with a more offensive approach that made Uganda’s players sit back and defend their goal.

However, Rwanda failed to maintain the pace or make use of their numerous half chances with Uganda pouncing on their third to take the lead through striker Fahad Bayo in the 41st minute.

Steven Mukwala also missed a chance that denied Uganda a double lead. Although the hosts tried to look for an equalizer through Medi Kagere and Haruna Niyonzima, Uganda’s defenders were smart enough and calm to deny them any chance.

The win becomes a morale booster for the Cranes that had hardly created any scoring chances in the qualifiers thus far. This becomes the first competitive victory for the Serbian tactician, Milutin Sredojević alias Micho since his return to manage the Cranes.

The triumph moves Uganda Cranes to five points while Rwanda remains with only one point. The two teams will battle in the return leg on October 10 at St Mary’s Stadium in Kitende. If Uganda wins the return leg they go to eight points in Group E.

After the game, Micho revealed that Uganda started planning for the clash against Rwanda straight after drawing against Mali. He however admitted that it was a tough contest despite securing the victory.

“First of all after the Mali match, we started preparing for this game, it has been an invisible match where my respected colleague Vincent Mashami prepared his team very well, it has not been well. However, we scored the goal in the right moment and locked wide areas to limit crosses and forced opponents to play long balls, and to play long balls against Uganda is not easy,” Micho explained.

The tactician noted that they have now shifted focus to the return leg that will be in Kitende three days later. In the other Group E game, Mali thumped Kenya 5-0 to move to 7 points.