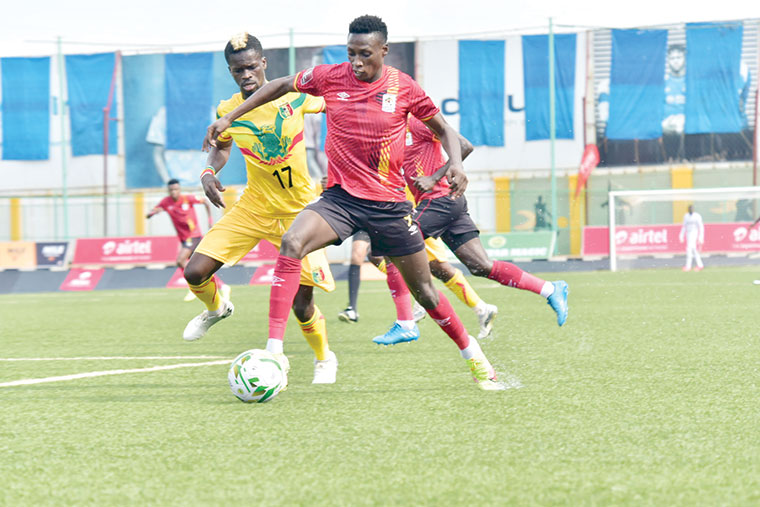 Two qualifiers played, no goals scored, one red card, hardly any chances created and only two points to show for their efforts.

That is the state of affairs for Uganda Cranes in Group E of the 2022 Fifa World Cup Qualifiers after Monday’s dour stalemate with Mali at St Mary’s Stadium in Kitende. It is hard to tell how coach Micho Sredojevic views the shape of the national team today.

Is it half full or half empty? There are positives, but those are few and far between. Cranes have depth in the goalkeeping department as Charles Lukwago and Ismail Watenga have both shown in the last two qualifiers. The team also boasts a plethora of options in defence as Enoch Walusimbi, a substitute for the injured Halid Lwalilwa in the Kenya match, has shown.

Walusimbi, Murushid Juuko, Denis Iguma, Isaac Muleme and Gavin Kizito are among the defenders who can be called upon by Micho to ably do the job. It is clear goalkeeping and defence are not problem areas for the Uganda Cranes. But there after, there is genuine reason for concern in the national team and why Micho has his work cut out in solving the long-standing problems of the Uganda Cranes.

It is a public secret that Uganda as a country has failed to produce an elite striker for ages now. Several forwards - Emmanuel Okwi, Patrick Kaddu, Shaban Mohammed, Derrick Nsibambi and Yunus Sentamu, among others, have come and shown flashes of brilliance but none has quite stamped authority on the no.9 jersey. It is impossible to win matches without scoring goals.

And Uganda’s goals are simply hard to come by. It is a generational problem that must be promptly addressed by the technical development instructors of the game. It is not a problem Micho will eradicate. Against Kenya and Mali, Uganda Cranes could have played for 180 more minutes without remotely looking like scoring. Both games exposed a chronic lack of centre forwards required of this level.

Okwi, the new national team skipper, is in the twilight of his career and didn’t finish either game. Nsibambi showed plenty of industry and willingness but there was no notable effort to trouble the Kenyan goalkeeper Ian Otieno and the Malian shot stopper Ibrahim Mounkoro.

How Cranes would do with a striker like Geoffrey Massa; his pace, work ethic and fine goalscoring record at home is evidently missing in this team. Yet it would be very wrong to limit the national team’s problems to a lack of a proven, prolific striker. The Uganda Cranes that played against Kenya last week and Mali on Monday is lacking in creativity in the middle.

Strikers have predictably been the fall guys but when a technical review of both matches is conducted, it will show that there was nothing in terms of opportunities created from the players whose nominal role is to fashion palpable chances inside the box. Bobosi Byaruhanga has only featured in two senior Uganda Cranes matches, if you discount Chan which is an Afcon that uses only home-based players.

Given his inexperience at this level, an argument can be made that he is getting to understand the intricate details of excelling at this level. But there has been nothing from Moses Waiswa, Joseph Ochaya and Milton Karisa, whose burning pace has only yielded a non-penalty that became a free-kick at Nyayo.

There had been nothing else from the trio. The Cranes have not scored in their last five competitive games. The positive is that Cranes are still within touching distance of the leaders Mali and if the team can somehow beat Rwanda home and away in the next qualifiers in October’s double-header, the 2022 World Cup dream will remain alive. That, however, remains a dream for now.

It was a difficult game at the St Mary’s Kitende AstroTurf after a heavy downpour that made playing conditions tough. Micho has a hard job on his hands and Rwanda will not be easy. It is a game he will be desperate to win having previously managed the Amavubi.

But to beat Rwanda in Kigali, Cranes must improve drastically from the shambles they were, in Nairobi and at St Mary’s. Juuko will be suspended after being sent off in the second half against Mali.

Unfortunately, the defensive Micho is back.
And true fo form, he summoned 4 left backs!!! :-)

Packing a team with defenders is not a problem. It's just that these guys do not even bother to score! Sekagya, Hasule, Latigo, the one & only (guess who), e.t.c, routinely scored goals.

These Cranes have no plan when they win the ball. They send air balls into a box full of tall opponents with only 1 or two Cranes forwards.

If you send young players into a Cranes' team with this mindset, they will be damaged for life.

FUFA should send the talented youngsters to play CHAN with a few experienced players and local coaches but keep Micho at bay.

BTW, how come you didn't get Micho's or any other expert's POV for this article?
Quote | Report to administrator
Refresh comments list
RSS feed for comments to this post
Add comment