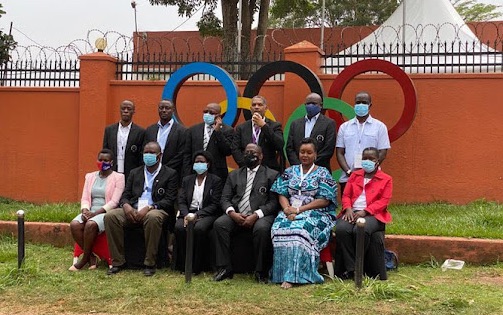 Whereas it is not new for Uganda to send large delegations of officials to major international games, the jostling for slots on Uganda’s contingent to the Tokyo Olympics has exposed a deep-rooted trend of favouritism and the financial windfall that comes with it.

According to insiders, nearly all top officials from the National Council of Sports as well as the Uganda Olympic Committee are already in Tokyo as officials and with about Shs 6 billion set aside for the Games, those who missed out have cried foul over the selection process.

Twenty-five Ugandan athletes are set to pursue their medal dream at the delayed 2020 Olympic Games, which get underway this Friday, July 23 in Tokyo, Japan, but a behind-the-scenes scandal in which the country’s officials have jostled for travel slots on the traveling contingent threatens to wither the winning spirit.

Uganda’s 56-man delegation has 31 officials, who include 13 coaches, 16 Uganda Olympic Committee (UOC) members and government leaders. It also has two internationally-accredited officials (ITOs) who will be in charge of officiating at the games.

Out of curiosity, the overwhelming number of officials compared to athletes suggests something is not right. Generally, this setting is not new to many Ugandan sports officials (it has been happening since the 1990s under Francis Nyangweso, the late autocratic UOC leader), who feared to raise the issue lest they faced the wrath of the authority.

This time round, however, Moses Muhangi, the outspoken Uganda Boxing Federation (UBF) president dared the powers that be in a letter to the state minister of sport, Hamson Obua.

In his letter, Muhangi lamented UOC and NCS’ bias against boxing whenever trips to international competitions such as the Olympics, Commonwealth Games and All Africa Games come up. He sighted ‘injustice’ because the two supervisory bodies (UOC and NCS) are currently headed by the same official in Dr Donald Rukare.

He questioned the logic behind the inclusion of, for instance, four non-technical UOC officials on the delegation. The UOC members include Dr Donald Rukare (UOC president), Moses Mwasa (swimming), Dunstan Nsubuga (hockey) and Sadik Nasiwu (volley- ball), all listed as NOC guests.

Save for swimming, hockey and volleyball did not qualify any athletes to the Olympics. And it is against that background that Muhangi feels boxing (with three pugilists; Shadir Musa Bwogi, David Kavuma Ssemujju and Catherine Nanziri qualified) deserved a slot, too, on the traveling contingent.

Athletics, which qualified the biggest number of competitors, is ably represented by the likes of AIP (Special Duties) Andrew Sorowen and Domenic Otucet, the athletics federation (UAF) president.

Muhangi’s critics, especially UOC and National Council of Sports (NCS) officials as well as some of his opponents in the local boxing fraternity, claim he is sour-grapping after being excluded from the delegation to Japan. It is worth noting that Muhangi has courted controversy since 2019 by making uncomfortable noise about unfair distribution of government resources and funding among sports federations.

He hit out at NCS over favouring some federations. He singled out the football body, Fufa, which takes a lion’s share of the sports budget. In so doing, Muhangi stepped on many toes not only in the football administration but also in the ministry of sports.

In March this year, he also attempted to run for UOC president but his ambition was nipped in the bud when he came short on the set qualifications (Rukare was unopposed for the top UOC job).

Indeed, one of the members on the contingent confirmed that Muhangi’s approach got him in trouble. “Muhangi’s tone will get him nowhere; UOC and NCS, Obua will sideline him totally. He actually wanted to go [to Japan] but they cannot pick him.”

Beyond Muhangi’s complaints, whether valid or not, there is the allure of hefty allowances and other benefits. Officials on the delegation will earn between Shs 7 and Shs 12 million in allowances and per diem, depending on how long one lasts in Japan during the two-week Games, which climax on August 8.

Apart from IOC guests and technical officials such as William Blick, Salim Musoke and Aciga Fula, majority of the general officials from NCS, UOC and the ministry are eligible to sign for allowances provided by government.

In an interview with Daily Monitor early this week, the state minister for sports disclosed that the government released Shs 5.3 billion for the overall expenditure on the games. This covers preparations for qualifiers that involved residential camp training, travel and accommodation allowances, among others.

This is on top of undisclosed sums from the International Olympic Committee (IOC) through UOC. UOC

When contacted, Beatrice Ayikoru, the UOC general secretary and chef de mission of the delegation to the Games, said Muhangi’s letter has a lot of ‘misinformation and is based on personal perception’, but explained the general criteria of selecting officials.

Ayikoru explained: “Officials for the games are determined by team size calculator based on the number of athletes qualified per sport. The more athletes you have, the more room for officials.

“There are different categories of officials that must form the team (technical/coaches and general - team manager, doctors, physio) all of whom must come from the number generated by qualified athletes. Unfortunately for Uganda, our numbers of qualified athletes are still small, implying that you can’t play with the figures to include additional officials. The Tokyo Games take place in Tokyo and Sapporo, requiring two sets of officials for sports happening in the two cities.”

She added: “There are National Olympic Committee (NOC) guests, whose number is also determined by the total number of athletes and officials. The NOC guests can cater for Government and UOC officials. These categories can’t be switched to executive committee members of federations. The other category is dignitaries, which is for specific government officials.

“The other category people are given chances to experience the games is under international spectators, and this could include executives of federations with or without qualified athletes. This would be at our cost, but in the case of Tokyo this category was canceled.

“There is no intention whatsoever to deny chances to any sport. The key focus on selection of team officials is the athletes, and thus coaches.”