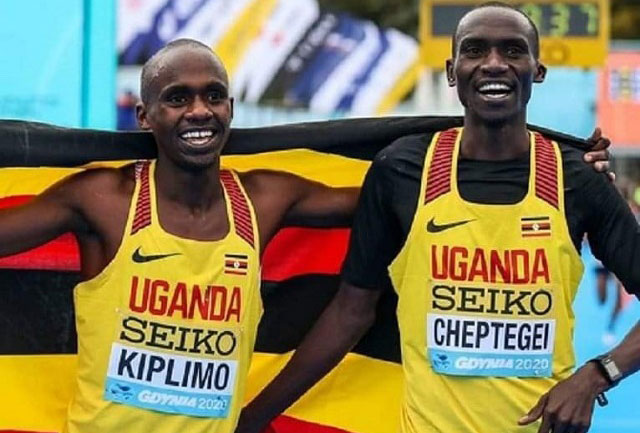 Runners Jacob Kiplimo (L) and Joshua Cheptegei are some of Uganda’s biggest medal hopefuls at the delayed 2020 Olympic Games, which get underway this week in Tokyo, Japan

With only seven medals won in the country’s 65-year involvement with the Summer Olympics, it is fair to say Uganda has hardly set the world’s biggest games alight, writes MARK NAMANYA.

The two outstanding memories, John Akii-Bua’s 400m hurdles gold in 1972 and Stephen Kiprotich’s stunning victory in London nine years ago, were so far apart and, if anything, vindicate the notion of Uganda being paperweights at Olympic level.

Put simply, Uganda has been averaging a medal at every two Olympics editions since the first appearance in 1956 when the Games were staged in Melbourne, Australia.

In fact for most of the recent years, there was a widespread feeling that Uganda’s representatives at the Olympics were mostly tourists who travelled to participate, rather than compete at the Games.

But maybe, just maybe, that could all change in Tokyo. Never before in the history of Uganda at the Olympics has the country gone into the Games confident of winning at least one, almost certain of a gold medal.

In fact, there was such a mutual feeling of disbelief and disappointment in the sports fold in the country last year when the Olympics were postponed. The decision effectively delayed what appeared to be a cast-iron Joshua Cheptegei gold in the 10,000m.

Cheptegei, with numerous world records under his belt, is precisely the reason why the country will be watching on in anticipation and expectation. The country will be eager to see Cheptegei win the only medal he hasn’t won.

Part of the reason Cheptegei’s story has interested Ugandans and athletics fans everywhere else is because of how he managed to overcome the capitulation of 2007, when his legs gave away in the men’s senior race of the IAAF World cross-country championships hosted in Kampala to deny him what seemed a dominant victory before a capacity crowd that included President Yoweri Museveni.

Since then, he has embarked on a staggering run of gold medals that include the World Athletics Championships, Commonwealth Games and IAAF World Cross-country Championships.

“I already rank him as the greatest athlete to have come out of Uganda,” 1996 Atlanta Olympic bronze medalist Davis Kamoga told The Observer.

“What he has achieved and how he has achieved it, to go along with all those world records leaves him above (Stephen) Kiprotich and (John) Akii-Bua,” the former quarter-miler added.

Cheptegei has the richest CV of any Ugandan sportsmen in history but conspicuously missing is the greatest medal of all – an Olympic one.

It is the reason Team Uganda will arrive in Tokyo with a huge weight of expectation. And while Cheptegei is viewed globally as one of the outstanding athletes expected to encounter little resistance on their way to gold, observers are not ruling out Jacob Kiplimo from medal contention.

The 20-year-old has matured so brilliantly in so short a time that he is considered a genuine medal hopeful in the eyes of keen track and field experts.

And then there is 800m world champion Halima Nakaayi, who is desperate to complete what would be a rich collection by adding Olympic gold to her historic triumph in Doha two years ago.

Cheptegei, Kiplimo and Nakaayi will be happy to carry the load of anticipation before the empty seats at the 80,000 capacity Japan National Stadium because their confidence couldn’t have been higher.

The rest of their compatriots will do well to have a sniff of the medal places including 2012 gold medalist Stephen Kiprotich, who is the team captain.

Swimmers Kirabo Namutebi and Ambale Atuhaire will at best better their personal marks and national records. They will most certainly not be in the reckoning for podium finishes.

Uganda is sending a rower for the first time in Grace Kathleen Noble as well as three boxers Musa Shadir Bwogi, David Ssemujju and Catherin Nanziri; the latter trio were the first to arrive at the Games.

The team, which was flagged off by President Museveni, will be steered by Beatrice Ayikoru as the chef de mission.

The minister of state for Sports Hamson Denis Obua will head the delegation along with UOC president Don Rukare and IOC member William Blick. Unlike before, the Games village will be a no-go area for officials with organisers doing everything they can to protect athletes from the coronavirus.