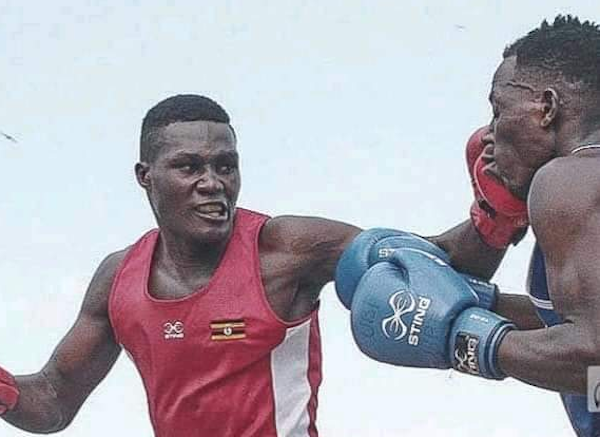 David Ssemujju was one of Uganda’s three boxers who arrived early in Izumisano city in Tokyo to acclimatize to the conditions ahead of the delayed Tokyo 2020 Olympics due next week.

Ssemujju, who landed in Japan together with fellow boxers Shadir Musa Bwogi and Catherine Nanziri, has said time and again he is not at the Olympics to make numbers.

The middleweight says he is at the world’s biggest games to make an impression at the Olympics and either win a medal or carve a way to the professional ranks. And the aggressive fighter has decided to use John ‘The Beast’ Mugabi as his inspiration ahead of the Games.

“He was a very hard puncher who I used to watch growing up, and he was very good and talented.

“He won silver in the 1980 Olympics at the age of 19 before turning professional and he is someone whose career I would want to emulate.”

Ssemujju’s style is similar to Mugabi’s in the sense that he is a very brave fighter who hunts his opponent in the ring. His all-action style can make him a handful for opponents but can also be conversely dangerous.

Yet Ssemujju has confidence in his abilities. He is at the Olympics because of continental rankings and wants to make his moment count in Tokyo.

“I have been training for more than a year,” the 29-year-old adds.

“I am ready and in shape and can’t wait.”

Whether he wins a medal remains to be seen but there is no doubt Ssemujju will offer his best possible performance in Japan.

He is aware the Olympics happen only once every four years and with uncertainties like the Covid-19 pandemic which led to the delay of the Tokyo 2020 games, Ssemujju is ready to give his all.

“I believe this could be my window to professional boxing; so, I don’t want to misuse it and regret; I want to give all I can and then see what the future holds.”

Uganda have traditionally done well in boxing but you have to go back to 41 years ago to dig up the country’s last Olympic medal in the discipline.

It is a barren spell Ssemujju will want to end along with his compatriots Bwogi and female boxer Nanziri.

“I am focused and ready to use this chance,” Ssemujju recapped.

No one can question his desire, motivation and enthusiasm.