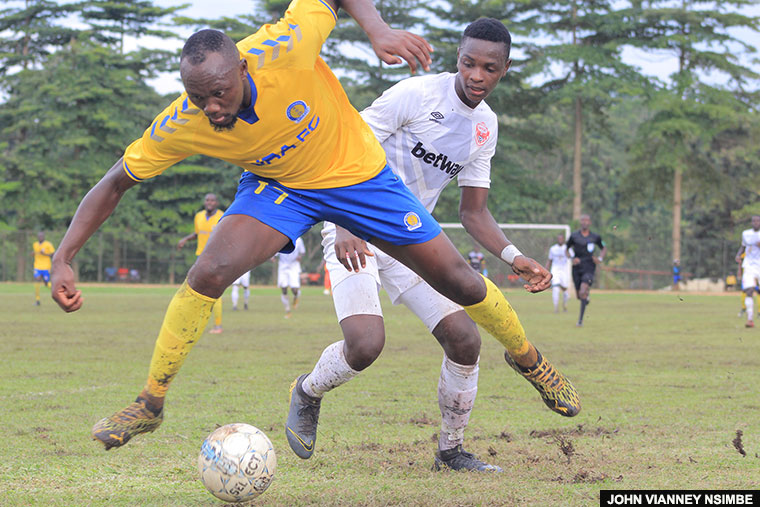 Coach Sam Ssimbwa had a bad feeling about the game.

Shortly before the kick-off of his side’s second leg clash with Express in Ndejje, Ssimbwa watched closely in dismay how waterlogged the field was following an earlier downpour, that had reportedly stopped by 1:30 pm.

Ssimbwa’s clear disappointment was the fact that it had taken too long for the water to be removed, as basins, buckets and mattresses were being used. He was right in the middle of proceedings, as he also instructed and guided the youthful individuals on how to remove the water fast.

But Ssimbwa was also quick to lament: “These conditions are not favourable especially for my team. Because we want to possess the ball, pass and move, this field is going to affect our style and approach. Yet, on the other hand, it is going to favour Express and their physical (robust) playing style. With this heavy ground, and so many of my players fasting, it is going to be hard.”

And rightly so, Ssimbwa was on the mark, as his side struggled to overturn the 2-1 deficit from the first leg. Despite huffing and puffing, the second leg, from which a 1-0 win would have sufficed, to get URA into the quarter-finals, ended 0-0.

As Ssimbwa had predicted, his team struggled in the first half, to get into any sort of rhythm. His captain Shafiq Kagimu said: “There were patches of water on the field, that always held the ball back. Such disruptions made it hard for us to dictate play and control the game. But in the second half, when the field was drier, we played better, although even Express were quite sturdy in defence. For that, we must give them credit.”

Express coach Wasswa Bbosa set up finely, to thwart URA. Since his side already had the advantage, he did not have to initiate much but defend doggedly. Yet, considering the state in which the field was, heavy and slow, Express were able to always keep their shape, proving difficult to break down.

One would have expected that maybe URA should have devised a shooting from distance strategy. But with Express’ 4-5-1 formation, there was little space for URA to manoeuvre. There were always bodies to block any attempts, which rendered Express’ goalkeeper Dennis Otim largely untested.

That is not to say, that Express did not try to cut out some of its own chances in the game. Two good first-half chances on the break saw URA custodian Hannington Ssebwalunyo pull off some brilliant saves off shots from Express duo, Charles Musiige and Eric Kambale.

However, URA’s main source of threat and imagination, Joackim Ojera and Brian Majwega off the right and left flanks respectively were well marshaled, as they were unable to stretch, to open up Express as much as they tried.

Ojera, for starters, is not profoundly a good crosser of the ball. But when in flight, he can be a nightmare to defences, because of his directness, dribbling and speed.

Yet, that was never going to happen on a heavy playing surface. And it proved decisive, as Ojera was substituted close to the end of the game without making any significant contribution, let alone test the goalkeeper. George Lutalo, the URA assistant coach told The Observer that he felt the team did as well as they could have under the circumstances.

Lutalo added: “We got a few good scoring chances, but our decision-making when in scoring positions, was usually wrong. But that is homework for us to sort out on the training ground. Otherwise, the story of our tie with Express was a case of a lucky side making it through at the expense of the better side.”

Focus now turns to the Uganda Premier League title hunt for URA. Without the destruction of the two-legged Uganda Cup tournament, URA will now be able to focus better on winning the league. Meanwhile, SC Villa were able to hang onto their first leg 1-0 win away to Onduparaka FC, to make it to the quarterfinals.

The goalless draw in the second leg in Bombo meant that the Jogoos won 1-0 on aggregate. In another tie, played away in Fort Portal, Wakiso Giants managed a 2-2 draw with Tooro United, completing the tie 7-3 on aggregate. But for what it is worth, coach Ssimbwa’s bad feeling before the game, was well vindicated in the end.