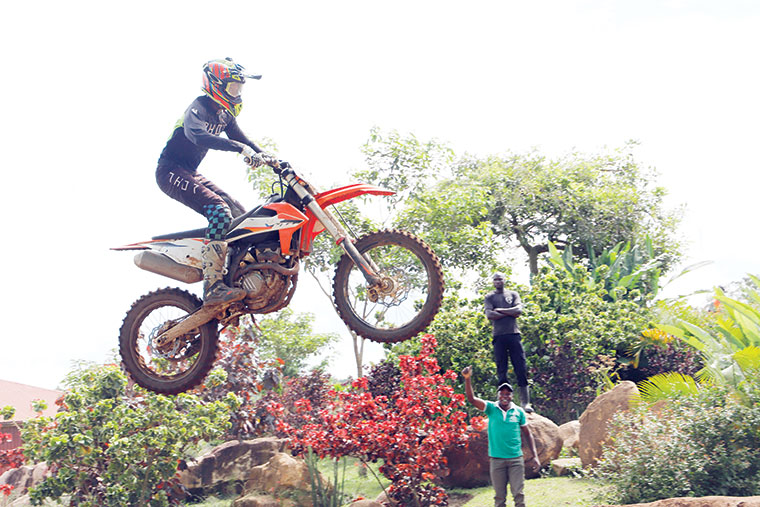 Stav Orland, one of the top motocross young riders, in action during MAU-organised event on Sunday, May 2 at Busiika

The animosity between the Federation of Motorsport Clubs in Uganda (FMU) and the Motorcyling Association of Uganda (MAU) had continued to exist with both factions holding events this year as the sport makes baby steps in recovering from the pandemic-hit season of 2021.

But there appears to be light at the end of the tunnel with the two parties taking major steps towards a merger,  writes MARK NAMANYA. The riders, young men and women whose passion is outdoing one another on their two-wheel monster machines, have continued to do their thing on the track.

On Sunday, Stav and Aviv Orland were at their exhilarating best at Busiika as they raced before an empty track seeing how fans are still not allowed at the venue because of the Covid-19 pandemic. Only a handful of parents, race marshals and journalists were present to watch the third round of the MAU calendar event.

Meanwhile, FMU had held their first motocross event of the year last month at Garuga, one that prevailed with no fans and a handful of riders. The sport of motocross finds itself at a crossroads.

“It is a pity that it has reached to this point,” said Amos Wekesa, the father of riders Kylan and Zion, on Sunday, May 2. “Egos have conspired to undermine the advancement of a sport we all love, which is really sad.”

Wekesa’s sons, in the meantime, had elected to compete in both MAU and FMU events in a clear sign that their dad was trying to be a pacifier.

The meetings which were called by the National Council of Sports (NCS), the government arm which regulates sport in Uganda, to find a solution to the impasse, have failed to bear fruit. And as a result, a scenario had arisen where two rival bodies were holding events which were only succeeding in undermining one another.

“We are supposed to host the African Motocross Championship but these disputes won’t allow us to pull it off,” Wekesa noted.

But it does appear that sanity has now prevailed and sooner rather than later, there will be one body running motorcross in Uganda.

“We are about to reach a common understanding which fits the interests of the sport,” Arthur Blick Jr, a 10-time champion of the sport, told The Observer on May 2.

“We have realised the faults on either side and decided to bury the hatchet; soon we shall be communicating a new position.”

The Observer understands that Blick and Barack Orland met on Sunday at Busiika and had a lengthy chat in a major breakthrough for the long-standing impasse. Ashie Young, a rider in the veteran’s class and a parent in the sport, has been brokering behind-the-scenes discussions between FMU and MAU alongw with Wekesa.

The development will be a relief for NCS and Sports state minister Hamson Denis Obua, who had all failed in forging a common way forward for the warring factions.

Discussions are still ongoing and it is hard to predict what the outcome will be in harmonising the two calendars but what is apparent is the massive step the two sides have taken in agreeing to meet to confront the issues that led to the divorce last year.

“We shall have one body and one calendar; of that, you can be sure,” Blick emphasized.

When the two bodies finally become one, it will be a momentous achievement for a sport that had risen to the pinnacle but was threatening to plunge itself into a deep abyss.