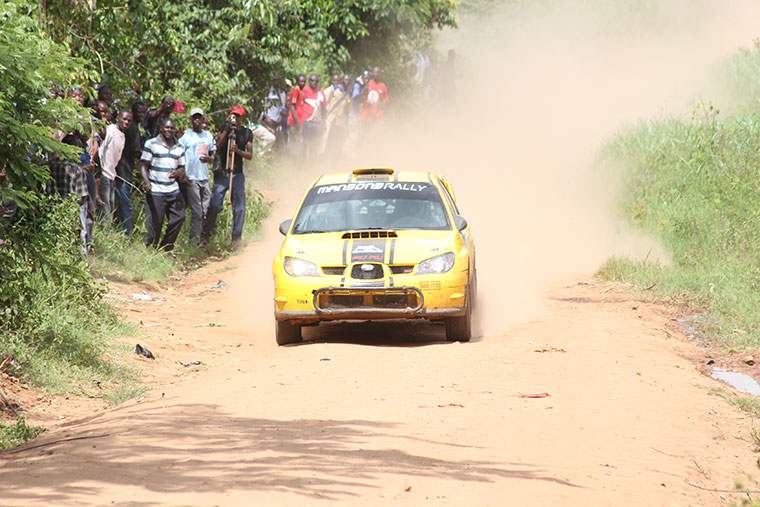 Jas Mangat cruises past fans in a previous rally

Jas Mangat’s return to the cockpit in more than fourteen months will not only add anxiety but also provides the much-needed competitive edge in this weekend’s Southern Motor Club (SMC)-organized Bwera Bristo Challenge Rally.

The rally, which is a continuation of the 2020 National Championship (NRC) series, is the first major competitive motorsport event ever since government banned sports activities after the Covid-19 pandemic broke out last year. It is set for this Saturday, April 10, with six closed competitive sections to be driven in parts of Sembabule district.

No fans will be allowed into any of the sections as rally organisers observe the ministry of Health recommended standard operating procedures (SOPs) to curtail the spread of Covid-19.

Twenty-six drivers, including two former NRC champions Mangat and Ponsiano Lwakataka, have been drawn in the rally seedings. Mangat, a three-time (2013, 2014, 2016 and 2017) champion, is coming off a one-and-half-year break from the NRC series. His last appearance was in the Pearl of Africa Uganda Rally in September, 2019.

While two-time champion Lwakataka (2005 and 2007) was in action last year before Covid-19 struck. Understandably, having both divers on the same competitor list is an extra for the SMC rally. Furthermore, they will bring out their tested monster machines; Mangat in a Mitsubishi Lancer Evolution X and Lwakataka’s Subaru N12B.

Apart from their enviable past track record and achievements, Lwakataka has set the tone by indicating that he wants to end the 10-year-plus NRC title drought.

“For me, the title race is just beginning and my biggest chance is still ahead. I think the real test will be in the Pearl of Africa Rally,” Lwakataka said in an interview on April 5. “So, this rally [SMC] will just help some of us shed off the rust.”

Lwakataka won the Pearl of Africa in 2011, becoming one of the six Ugandan drivers to clinch the event that draws the continent’s best competitors every year. The best performers in Pearl Rally score bonus championship points.

Going into this weekend’s SMC Rally, Lwakataka, fondly known as ‘Mafu Mafu’ by his fans, has 80 points in the NRC title race. He earned them from the Jinja Rally in March 2020.  Currently, Fred Kitaka Busulwa (130 points) leads the 2020 NRC title race, followed by Omar Mayanja (110 points), Hassan Alwi (100 points) and Duncan ‘Kikankane’ Mubiru (90 points) in respective order. Yasin Nasser, the 2019 winner, is the reigning NRC champion.

Seasoned NRC title challengers such as Godfrey ‘Tallman’ Lubega (Subaru N12), Duncan ‘Kikankane’ Mubiru (Subaru GVB) and Hassan Alwi (Subaru N14) will be the other contenders to watch out for in this SMC rally.

Competitive action will pun out in four sections: Lutunku (20km), Lugusulu (17km), Hajj Ggombe (22km) and Baraka Fashion Store (6.3km), all located on private farmland in Sembabule. Lutunku and Lugusulu will be repeated.  The latter sections; Haj Ggombe and Baraka are named in honour of former rally driver and administrator Hajj Hamidu Ggombe while Baraka Fashion Store is one of the rally sponsors.

After the SMC Rally, drivers will contest for championship points in the FMU sprint, the Fort Portal Rally, the Pearl of Africa Uganda Rally and the Kabalega Rally on the local calendar.

For drivers, who can afford, racing in regional events in Kenya and Tanzania, will score points towards their NRC title ambitions.