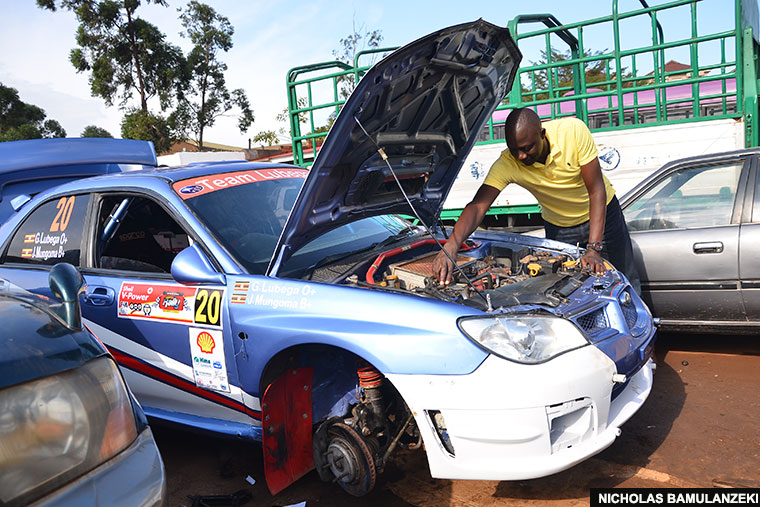 Godfrey Lubega checks on his car before a previous rally. He is one of the drivers confirmed for participation in the SMC rally next weekend

The Federation of Motorsport Clubs in Uganda has been cleared to resume its calendar activities after the Covid-19 pandemic brought the season to a sudden halt last year, reports MOSES MUGALU.

Efforts by the Federation of Motorsport Clubs in Uganda (FMU) to resume its calendar activities have finally succeeded after getting green light from the ministry of Education and Sports.

In a letter to the National Council of Sports and Uganda Police Force, Hamson Obua, the state minister for Sports, has cleared motorsport activities but on condition that organisers must adhere to the ministry of Health’s standard operating procedures (SOPs) to prevent the spread of Covid-19 disease.

Obua’s clearance is a major boost to preparations for Southern Motor Club (SMC) Rally due next weekend (April 10-11) in parts of Greater Masaka districts. Last weekend, organisers of an earlier scheduled (MOSAC Autocross) event in Zion Estate, Sisa were forced to postpone because the minister’s response did not come in time for the riders to hit the track.

However, SMC officials were delighted on receiving the positive news in Obua’s letter on March 26. “We have proceeded to get further clearance from the ministry of Works and NCS; so, the rally is on,” Jared Kalera, who clerk of the course for the SMC Rally, declared on March 29.

Registration for event is Shs 500,000, which covers medical (Covid-19) tests, GPS tracking transponders installation for each crew and accommodation. The SMC Rally is a continuation of the 2020 season, which the FMU suspended after only two events (Mbarara and Jinja rallies) last year.

In total, there will be five NRC events this year, if all goes on as planned. In a bid to decide the 2020 NRC and CRC (Clubman Rally Championship) winners fairly, FMU said championship points scored during the Mbarara and Jinja rallies will count in the title race.

Apart from the SMC Rally, drivers will contest for championship points in the FMU sprint, the Fort Portal rally, the Pearl of Africa Uganda Rally (POUR) and the Kabalega Rally. For drivers, who can afford, racing in regional events such as the Equator Rally (Kenya) and the Tanzania Rally, will score points towards their NRC title ambitions.

In abiding by the SOPs, the SMC Rally will not include the super special sprint stage as the norm in past rallies. No fans will be allowed and the closed route sections have been marked on private farms. In an interview last month, Kalera noted they have to operate within the odd circumstances without fanfare but insisted drivers will enjoy the rally.

“It will be a fast rally,” Kalera predicted, adding that there are no rocks and ditches in any of the sections. “So, the drivers should afford to do maximum speeds since they don’t expect any obstacles in the route,” he added.