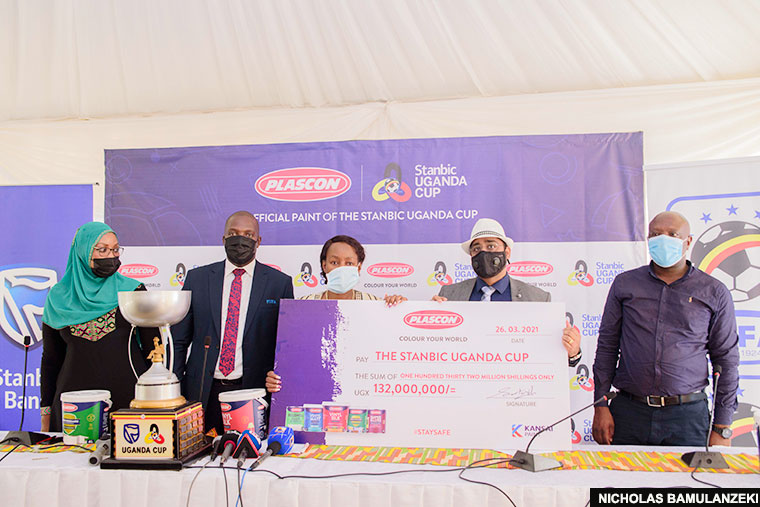 The draw for the round of 32 of the 2020/21 Uganda Cup was held last week at the Fufa House in Mengo. This came right on the back of Plascon Paints’ unveiling of their Shs 132 million sponsorship package last Friday, March 26 of the Uganda Cup.

Although Bright Stars lost that tie through post-match penalties, following a 1-1 draw in regulation time, Mathias Mugwanya, the chief executive officer told The Observer that the Shs 20 million runners-up cash prize was a significant boost to their coffers.

Mugwanya recalls: “That was money that we had not budgeted for, when we entered the season. Yet, at the end of it all, had entered our account, helping us offset a number of expenses. So, to see Plascon come on board with such monies, is a welcome boost especially for so many small clubs that have no sponsorship.”

For example, Mugwanya explained that they used half their cash prize as bonus to the 28 players and six members of their coaching staff. Summarily, each individual received at least Shs 300,000. For a club like Bright Stars, the players and coaching staff, this is big, because it is not usual, that they will receive such an amount of bonus.

But even more significantly, Mugwanya said that this prize money was so timely for a team like theirs, that does not collect much in terms of gate collections every season. On average, Bright Stars collect between Shs 15m and Shs 20 million from match ticket sales every season.

So, without a doubt, getting an additional Shs 20 million like they did in May 2019, could not have been a small matter for a club of their stature. The demands and expenses of the game are quite many.

Meanwhile, the current holder of the Uganda Cup, Proline FC, bagged Shs 40 million as the winning prize, which came in handy, as they embarked on playing in the Caf Confederation Cup in 2019/20.

This time, however, the winner will take home Shs 50 million while the runner-up will take home 20 million. The losing semi-finalists will each get Shs 12 million, while the teams that stop at the quarter-finalist stage will receive Shs 6 million.

Losers at the round-of-16 and 32 will each get Shs 3 million and Shs 1.5 million respectively. Teams only receive money at particular stages their participation is stopped. KCCA FC and Express FC are the joint record holders of the Stanbic Uganda Cup with 10 cups each.