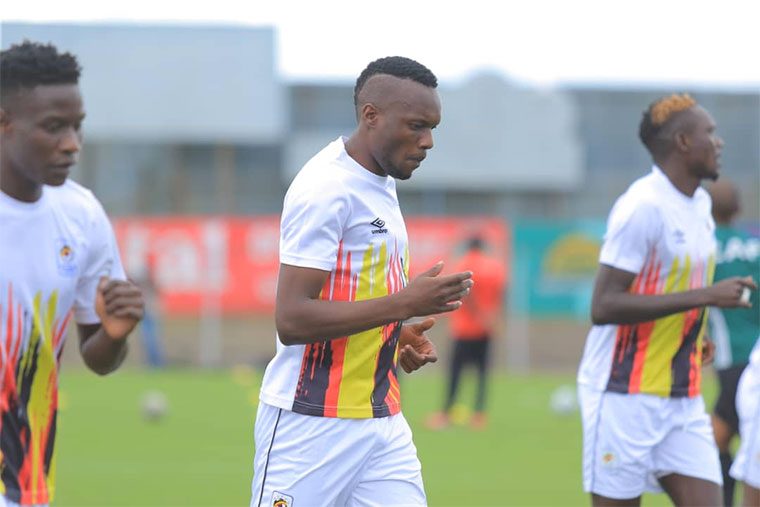 Cranes player warming up in Malawi

The Cranes have a chance to qualify for their third successive Africa Cup of Nations, when they face Malawi at 4pm (Ugandan time) today in Blantyre at the Kamuzu stadium. However, The Cranes will have to contend with some key absentees, after injuries hit the squad before they travelled on Sunday, March 28.

Strikers Fahad Bayo and Patrick Kaddu, both of whom featured in Cranes last fixture against Burkina Faso last Wednesday at the St Mary’s Stadium in Kitende were not part of the travelling party. Also, Israel-based defender Timothy Awany did not recover in time after sitting out the Burkina Faso game.

Considering that Bayo scored in the corresponding fixture against Malawi in November 2019 at Namboole stadium, is a pointer to how much he is likely to be missed. In fact, even against Burkina Faso, when Bayo came on for Kaddu, after he pulled a thigh muscle, his runs and the physicality he subjected the Burkinabes to, was impressive.

For many observers, the Bayo approach would have suited Uganda so well in an away game. Yet, it goes without saying the significance of Kaddu’s display. Kaddu, whose rise to fame, was the goal he scored in November 2018 against Cape Verde, to ascertain Cranes qualification to Afcon 2019.

Kaddu has proved to be one of Uganda’s recent finds, and his hold up play and movement in and around the penalty area, have him second to none among Cranes forwards. Kaddu’s work-rate also holds him in high regard as far as his contribution at international level is concerned.

But above all, the threat Kaddu poses in the air had given the team a new dimension since former Cranes striker Geoffrey Massa retired in 2017. Because of Kaddu’s speed and physicality, he has in the eyes of many appeared to be the more natural replacement to Massa.

Yet, without Kaddu and Bayo this afternoon, Cranes interim coach Abdallah Mubiru has to conjure up something, to ensure that the team crosses the finish line. Although scoring may not be the priority, since a goalless draw will suffice, to ensure qualification, Cranes, whose strikers last scored in November 2019, will need a sharp front-line, nonetheless.

A Cranes goal will under normal circumstances leave Malawi with a mountain to climb. Striker Yunus Sentamu has revived his career since he returned to play in the Uganda Premier League for Vipers SC. In his 10 league appearances, Sentamu has scored seven goals, and he is the more natural finisher than all strikers, that have been in Cranes camp.

The 26-year old forward, who scored three goals in Cranes 2014 African Nations Championship (Chan) had fallen off the radar, after the 2017 Afcon, where he made the squad, but did not play in any game. He actually sees his return to The Cranes fold, as an opportunity to recover lost time.

Sentamu is motivated and raring to go, he told The Observer when he was summoned earlier this month. And he is also the kind of forward, who thrives on self-confidence, which the former CS Sfaxien player has in abundance. Sentamu is expected to be Mubiru’s go-to guy at centre-forward, and he is a reliable goal grabber once trusted.

It is no doubt Sentamu has also played in the final of the Caf Champions League for AS Vita in 2014. Also he has played under former Brazilian international Ze Maria at European side KF Tirana of Albania in the Uefa Europa League.

Other forward options for Mubiru will definitely be deputy Captain Emmanuel Okwi. Also midfielder Kizito Luwaga, who last scored for Uganda in July 2016 away to Botswana, should feel he owes Ugandans one unforgettable display, as does attacking midfielder Faruku Miya, on whose back Uganda’s qualification has been riding since 2015, because of his goals.

Miya’s last goals for Cranes were the brace in the 2-0 away win to Lesotho in June 2018. But when push comes to shove, Mubiru also has the option of Allan Okello, who had the knack of showcasing magical and decisive moments for his former club, KCCA FC. Jomo Cosmos’ Daniel Isiagi also made the squad, and maybe he could be Mubiru’s tramp-card since the coach has five substitute options.

In a nutshell, while Uganda are favourites to make it to Cameroon, the bottom line, is that they will have to put in a shift, to secure the desired result. In fact, this game is a make or break, where Uganda can ill afford to be complacent, something noted, when they faced South Sudan in November 2020.

The line-up picked then, suggested Uganda did not think South Sudan posed much of the threat. The likes of Okwi and Michael Azira, for example started on the bench, which is said to have given South Sudan so much confidence from which they bagged a 1-0 victory.

Unless otherwise, Mubiru is expected to field largely the same starting line up like the one against Burkina Faso, bar the absentees from injury. But it will also be a hard call from him, considering how well the substitutes Moses Waiswa and Ibrahim Orit performed in that game.

Waiswa and Orit gave the team more purpose, which raises the question why Mubiru did not summon a few more additions to his squad, after realizing that Kaddu and Bayo were major doubts. Mubiru took a squad with four goalkeepers, which has raised a few eye-brows.

Couldn’t he have added forwards Steven Mukwala and Johnson Odongo and midfielder Shafik Kagimu, who have been in with the goals, and would have certainly provided him with more attacking options, that he surely will need this afternoon?