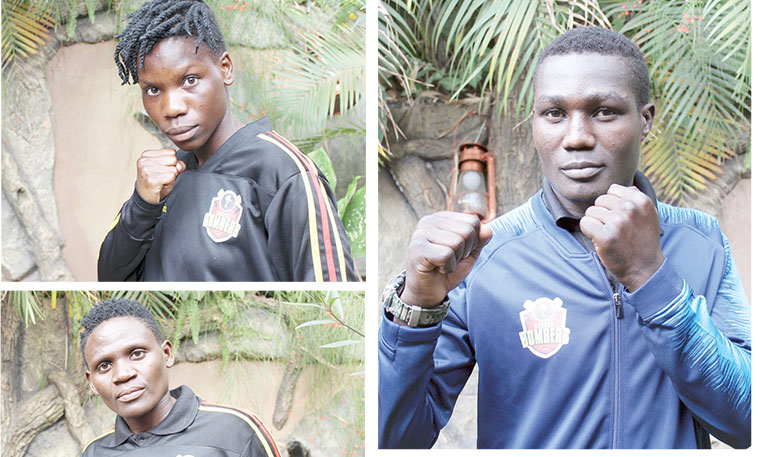 CLOCKWISE: National team pugilists Catherine Nanziri, David Ssemujju and Emily Nakalema are struggling to prepare for the next Olympic qualifier in June

In the last two months, national team boxers preparing for Olympic qualifiers have literally scavenged the dustbins to survive while on duty in hope of getting the coveted slots to the rescheduled 2020 Olympic Games due in Tokyo, Japan later this year.

The boxers, who include David Ssemuju, Isaac Masembe, Emily Nakalema and Catherine Nanziri, endure training without proper meals, access to ideal facilities, allowances and, they have inevitably become beggars. But The Observer understands that government released Shs 30 million to facilitate their preparations on December 7, 2020.

National Council of Sports (NCS) general secretary Dr Patrick Ogwel confirmed the money was given to Uganda Boxing Federation (UBF) whose president Moses Muhanga has, ironically, claimed that government has not supported the pugilists since lockdown.

On Monday (February 15), Ogwel said UBF has provided accountability, which NCS will scrutinize soon. Based on UBF’s request, NCS apportioned Shs 7 million to directly go to seven boxers during their training.

Ssemujju, the 2019 All Africa Games silver medalist and reigning Uganda Sports Press Association (Uspa) boxer of the year, is one of the country’s pugilists clutching on the last-ditch chance to qualify for the Games.

After his respectable performance at the continental games in Rabat (Morocco), Ssemujju was widely tipped to clinch a berth at the 2020 Olympics at the African boxing Olympic qualifiers in February last year in Senegal. Unfortunately, Ssemujju did not make it past the semi-final stage then.

But he has another shot at the Olympics when the final round of qualifiers is held in June. However, his preparations for the ultimate qualifiers have been far from ideal due to lack of logistics and financial support.

“For the last few months, I have done my best to train every day, so that I get into the best shape to compete. But without facilitation, I have had to fend for myself to get the right things to eat,” Ssemujju said.

He added: “Ordinarily, I expected that immediately after we returned from Senegal, we should have some support from government to ensure that our welfare, as national team pugilists, was good in terms of nutri-tion and also training facilities.”

Although he acknowledges that the lockdown due to Covid-19 since last year has disrupted many sporting programmes, the government ought to have a constant tracking system of all national team boxers. His spirit to achieve the Olympic dream, however, has not been broken.

“Now, I have had to engage in art paintings and painting homes, to get some income on which to survive, and also enable me pay for training facilities,” he disclosed.

Ssemujju is not alone. His compatriots Masembe (another 2019 All Africa Games silver medalist), Nakalema and Nanziri, who are are supposed to travel with Ssemujju for the final qualification stage, are equally frustrated. Being a member of the Copab boxing club, Masembe uses the rudimentary gym there.

Perhaps by now, the Uganda Boxing Federation should have had some sort of camp in place, to get the pugilists ready. Shadir Musa Bwogi is the only Ugandan boxer who has already booked his ticket to the Olympic Games in Japan.

The Games were postponed last year due to the Covid-19 pandemic. They are rescheduled for this August.