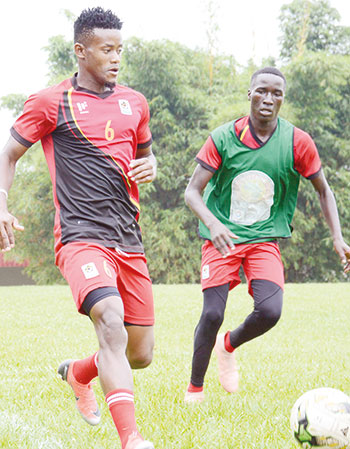 Saidi Kyeyune’s two scorching strikes will be hard to forget; not only limited to being Uganda’s accountability for what was a poor showing, reports JOHN VIANNEY NSIMBE.

Midfielder Saidi Kyeyune was easily the one Cranes player, that left an indelible mark on the 2020 African Nations Championship (Chan), that ends this weekend in Cameroon.

However, for many Ugandans that are disappointed about the team’s below-par display, and are already calling for coach Johnathan McKinstry’s head, they wait with bated breath about whether Kyeyune is truly the come-back kid.

Until this time, Kyeyune had last registered a Cranes cap in 2014, much to his disappointment: “It has been a real hard road for me, getting back on the team. I do not know why I was overlooked. But I am happy to be back, and hopefully my performance has vindicated me,” Kyeyune said.

Right now, Kyeyune is so fired up to remain in the team by putting in consistent performances at club level. Since he played in the 2014 Chan tournament in South Africa, Kyeyune lost the spark, that had former Cranes coach Milutin Sredojevic wax lyrical of his technical ability.

In fact, in 2016, Kyeyune was loaned out to newly promoted Pro-line FC then, after coach Kefa Kisala questioned his attitude.

Kyeyune admits that he was not playing well by then. At least he was not influencing games like many may have seen him attempt to do in Cameroon against Togo and Morocco.

He said: “It was simply a phase in my career, where my game went down. It is quite common among young players. But I am now back, and much credit must go to coach Sam Ssimbwa for restoring my confidence.” Kyeyune, who has 19 caps and four goals, flew out to Sudan to complete a move to giant side El-Merreikh on Sunday, January 31.

This is a fulfillment of the life-long dream to play professional football outside Uganda. It has been a long journey thus far for the now 25-year-old, who started out in Kiwanga FC near Namanve along Jinja road. He made his debut for the Cranes in 2012 under coach Bobby Williamson. He won the Cecafa Senior Challenge Cup that year.

But that followed the tutelage he had under coach Asaph Mwebaze at Maroons FC.

“I first watched Kyeyune playing for Misingye FC in the Big League in 2009. Coach Paul Nkata was his coach and I saw an attacking mid-fielder with speed, good work rate, fine passing range and with a shot from distance in him,” Mwebaze said.

Like at Seeta United FC, where Kyeyune spent a short spell in the first division before his quality sore through, after the 2010/11 season at Maroons FC in the Premier League, he was off to URA FC.