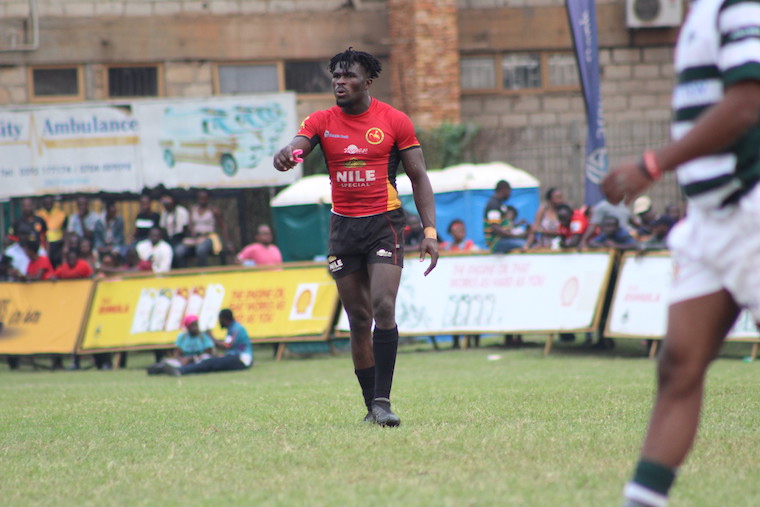 Getting to the Olympics is a tough and rigorous journey. Oftentimes it is hectic. And considering, that the qualifiers in France, were meant for last year, the postponement because of the Covid-19 pandemic was a major setback.

Yet that fact will not distract Pius Ogena from keeping his eyes on the prize. He has come from so far to give up now. Besides, patience is one virtue he boasts of having. While the Uganda Sports Press Association (Uspa) voted Ogena as the best rugby player of 2019 in January 2020, he did not receive his award until November.

Such has been the story of Ogena; getting the job done no matter how long and frustrating the process may be. Ogena was born in Mulago 1994 on October 30 to Richard Oyulu and Florence Abidaru, as the fifth born of his father’s six children but the last born of his mother.

And no wonder he was so much of a mummy’s boy. While that is usually seen as a bad thing, instead, for Ogena, being a mummy’s boy precipitated so much positivity. He learned how to be a great cook from his mother, and to-date, preparing traditional dishes is one of his greatest fortes.

When he is not on the rugby field tackling opponents, he is at home preparing matooke, posho and peanut pasted beef stew, one of his favourite meals. In fact, he plans on starting a bakery and a perhaps a food court soon.

“It was an idea I have harboured for a long time. I thought I would start it last year, but the pandemic outbreak set me aback,” Ogena said.

However, that is not the only Ogena programme, that was derailed. By this time last year, Ogena and company were in camp preparing to fly to South America for qualifiers, that begun the dream to the Olympics. The Sevens Rugby Cranes passed that test with flying colours, to book a date in France.

So, who knows, maybe by this time, they would have returned from the Olympics. That would have been a huge mark on Ogena and his colleagues' resume; to be the first rugby team from Uganda to play at the Olympics. Nonetheless, the prospect of that remains alive for Ogena, however, delayed it has been.

“Of course, not being in competition for a year has affected us a lot. Yet we cannot cry over that now, but focus on what we can change going forward,” Ogena said.

On January 4, the Sevens coach Tolbert Onyango summoned Ogena and 14 others for a camp in Kapchorwa. They spent a week there, and it was all for a good cause. Ogena said that being taken to Kapchorwa, a high altitude location was timely, because of how difficult it is to train there.

He pointed out that because of the low oxygen levels up there, it put a strain on their bodies, yet helping improve their endurance, a component they will need to overcome the opponents that lie in wait when they get to France.

These will include Tonga, Samoa, France, Ireland, Jamaica, Brazil, Hong Kong, Zimbabwe, China, Chile and Germany. Ogena says that they already feel great in terms of physical shape since they returned from Kapchorwa, and all they have to do is build on that.

Thus far, Ogena’s life has been one of building blocks. Being the reigning Uspa Rugby Player of the Year, a crown, one would expect, Ogena will hold on to for at least two years due to Covid-19 interruptions on sports activities.

But pieces have kept falling into place all because of Ogena’s efforts and dedication to the sport. It all started in 2004, when the Uganda Rugby Union sent Regina Lunyolo (a Union executive today in charge of women’s rugby) to St Jude primary school, where Ogena was a pupil to teach touch rugby. By then, Ogena was more accustomed to football and boxing.

Yet, when he joined City high school, Ogena made Kyadondo Rugby Club his home. Some of his peers at the time were Phillip Wokorach, Joseph Oyet and Kevin Kerimundo, who are all national team players today. By 2007, Ogena was turning out for the development side at Kyadondo, Saracens, which later became Stallions.

By 17, Ogena’s star was rising. He got a scholarship to study his ‘A’ Levels at Hana Mixed School in Nsangi in 2013. And in 2014, Ogena graduated to start playing for Buffaloes, as either a flanker or centre. In 2018, he was signed by one of Kenya’s celebrated teams, Kabras Sugar. Yet, after one year, he returned home, which appeared to dent his growing reputation.

Had Ogena failed in professional rugby already? He explained: “Playing in Kenya is tough because it is a very competitive setting. After my first season, I realized I had to bulk up more. Kabras was signing some huge and experienced guys from Fiji. So, I guess, that was one reason why my contract talks with them also failed.”

With that setback, Ogena seemed primed to return to Kyadondo and play for Heathens. Yet, Ogena did what, being a Catholic, is considered sacrilegious - a near unforgivable sin. He crossed to Legends, to play for the arch-enemy, Kobs!

To make it worse, Ogena helped Kobs win two of the three major domestic trophies, the Uganda Cup and the Sevens Championship in his first season. This was capped by being the best player in 2019. “Hahahahaha”, Ogena laughed.

But he quickly added, “Going to Kobs was not sacrilegious as you make it out to be. I do not think Heathens felt betrayed by me in any way because it was about going to where I got the best offer as a player.”

Besides, it is to the highest bidder normally, that the spoils go. In that respect, Ogena knows, that the only way the Rugby Cranes can make it to the Olympics, is by being better than the rest. He acknowledges, that it will not be easy, but they have to put their bodies on the line for the flag because their future depends on it.

“Making it to the Olympics is an opportunity for us to open the gates of possible fortune. It is at such a big stage, that you will find all sorts of rugby scouts, and that is a chance of a good payday,” Ogena highlighted.

For what it is worth, Ogena is such a friendly individual, and receptive. He has no airs around himself. It is a personality trait he attributes to his mother. She was a kind at heart person, and when she passed on in 2014, following a short illness, Ogena said, it turned his world around.

He was broken. But at the same time, it was a reality check to take on the world and fend for himself, because that was largely the attitude his mother instilled in him. That is why Ogena gives everything to ensure that his team wins in rugby.

While Ogena comes from a low profile background, he has travelled the world because of rugby. Australia, Germany, San Francisco, Chile, Uruguay, Hong Kong, Namibia, South Africa, Morocco and Dubai among others.

For Ogena now, focus is on Tokyo. He will complete his Bachelors in Procurement and Logistics Management degree, that he abandoned in his second year at Uganda Christian University, Mukono, in 2017.