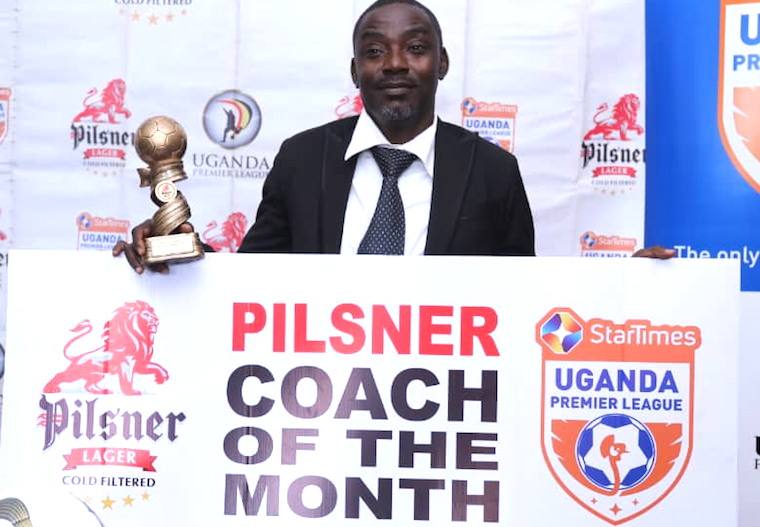 Kefa Kisala with his award

Kefa Kisala has been awarded the Pilsner Lager Uganda Premier League (UPL) Coach of the Month award for December 2020 after seeing his side UPDF FC finish the month at the top of the table.

UPDF FC, who were only promoted to the first division this season, have lost one game out of five games played beating Busoga United 3-0, Kitara FC 5-1, BUL FC 2-1 and edging Police FC 1-0. Their only loss in December was 0-1 to Kyetume FC.

The impressive results have seen UPDF finish the month at the top of the StarTimes Uganda Premier League table. Kisala edged URA’s Sam Simbwa whose side are yet to lose a game this season and lie second on the table log to the award.

URA has won three and drawn two out of five games, beating KCCA FC 2-1 , SC Villa 2-1 and BUL FC 2-0 and drawing 1-1 against Mbarara City and 0-0 against Soltilo Bright Stars.

Elsewhere, KCCA FC’s Brian Aheebwa was named Pilsner Lager UPL Player of the Month for December 2020, having finished the month with seven goals from four games including four against Onduparaka FC. Aheebwa also scored against Soltilo Bright Stars, against SC Villa and against URA FC.

League action resumes in February after the 2021 African Nations Championships (Chan) tournament, which kicks off later this month in Cameroon.