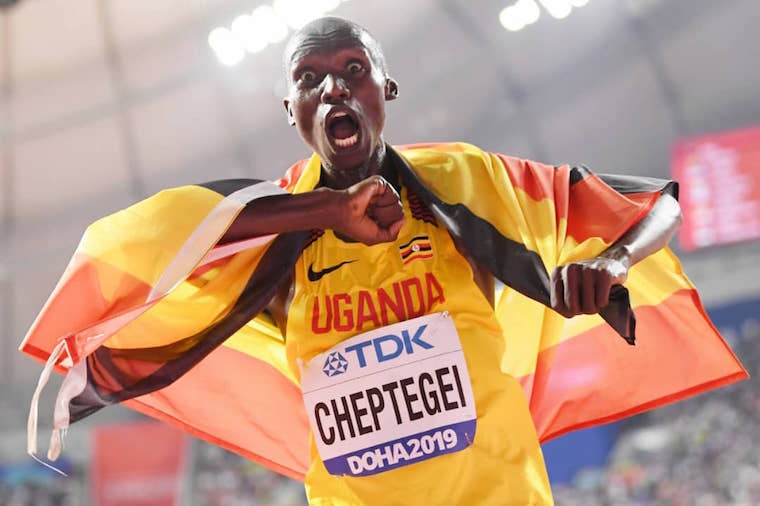 The parameters to define true greatness are often a divisive topic. Sporting greatness is even more contentious but The Observer has zeroed down on five individuals (in respective order) whom we feel are Uganda’s greatest ever since the country gained independence in 1962.

The oddity about his selection is that only four years ago, he was a laughing stock on social media after his spectacular capitulation at Kololo ceremonial grounds during the 2017 World Cross-Country Championships.

The other oddity is that he has not won an Olympic gold medal – yet. The rest of his sporting CV is nothing short of legendary. Cheptegei, the first Ugandan to win 10,000m gold at the World Athletic Championships, holds four world records.

He destroyed Kenenisa Bekele’s long-standing 5,000 and 10,000m marks in superb style and is also the reigning world cross-country champion having exorcised his Kololo demons at last year’s event in Aarhus, Denmark.

Such is Cheptegei’s remarkable CV that the double Commonwealth gold in Gold Coast, Australia in 2018 is a footnote in his accomplishments. The 2020 Olympics can’t come sooner for Cheptegei, for they will present him the chance to win the only medal missing around his neck. Regardless, he is the greatest of all time. No Ugandan sportsman boasts such a remarkable collection of feats.

Kiprotich stunned the world when he unexpectedly won the London 2012 Olympics Marathon gold; but arguably his feat the following year in Moscow, when he completed his prestigious haul of marathon golds, was even more remarkable. In athletics speak, the marathon is ranked up there with the 100m which customarily is the blue-ribbon event of any Olympics or major championship.

Marathon running is the ultimate test of endurance, patience, stamina and composure for more than two hours. Kiprotich thrust Uganda into global headlines at the peak of his powers while becoming the first Ugandan to win both Olympic and IAAF World Championship marathon gold. His best years are past him but his legacy is secured in the history of Ugandan sport.

For several decades, Akii-Bua was the undisputed G.O.A.T (Greatest Of All Time). The 1972 Munich 400m hurdle he won for Uganda will perhaps remain as the most iconic sporting feat ever.

It was not just a gold medal; it was a victory achieved in world record time of 47.82 against a field that included elite hurdlers Ralph Mann of the USA and Great Britain’s Dave Hemery.

So good was Akii-Bua’s time that it would have fetched a bronze medal at the 2016 Rio de Janeiro Olympics, which were staged 44 years later.  It was Akii-Bua who showed the world that there was a country called Uganda somewhere on the global map.

Circumstances way beyond his control denied Akii-Bua a chance to defend his medal at the 1976 Olympic Games in Montreal and by the time he raced at the 1980 Games in Moscow, he was way past his best.

Akii-Bua will always be Uganda’s first Olympic gold medalist as well as the country’s first-ever world record holder. Akii-Bua passed on in 1997 aged 47.

The small man from Kabarole died in abject poverty in Rugongo village but his standing in the pantheon of great Ugandan sportsmen is beyond dispute.

Rwabogo was the first Ugandan to win the country an Olympic medal, a feat he pulled off at the 1968 edition in Mexico City. It was a bronze medal he won, just six years after the country had attained independence from British rule. Four years later at the 1972 Munich Olympics, Rwabogo went one better and claimed silver.

It is indicative that John ‘The Beast’ Mugabi completes the five-man list of Uganda’s greatest-ever sportsmen. Athletics and boxing have traditionally been Uganda’s most rewarding disciplines at global level and in Mugabi, Uganda possessed a gem in the ring.

Competing at welterweight at the age of 19, Mugabi won silver at the 1980 Moscow Olympics. No Ugandan boxer has won an Olympic medal since.

“He possessed the most devastating hook I ever saw; if it caught you clean, you were finished,” Charles Lubulwa, one of Mugabi’s  former teammates, recalled.

Mugabi’s talent promptly saw him turn professional and he was part of the golden era of the middleweight division that included illustrious names like Marvin Hagler, Sugar Ray Leonard, Thomas Herans and Roberto Duran. Mugabi is listed at 38 in Ring magazine’s list of 100 greatest punchers of all time. Mugabi was WBC super-welterweight champion between 1989 and 1990.