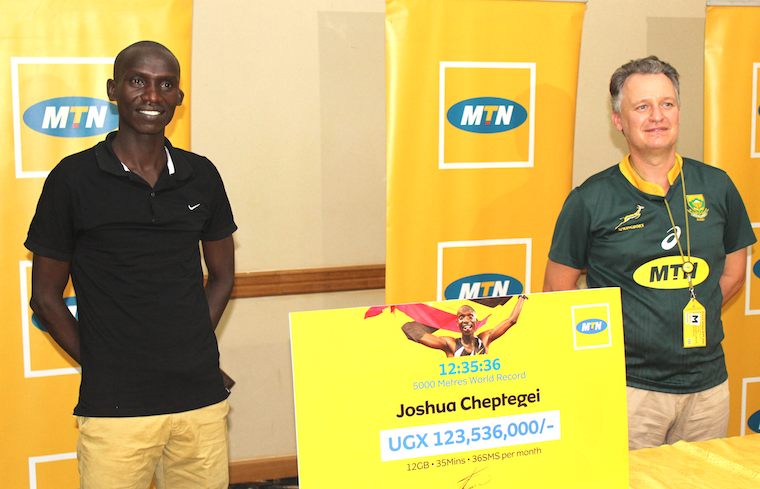 Joshua Cheptegei whas been rewarded for his new World Record

MTN Uganda has rewarded record-breaking athlete Joshua Cheptegei with a cheque of Shs 123,536,000 in a ceremony held at Mbale Resort hotel. The cheque was a representation of the new 5,000 metres world record of 12:35.36, Cheptegei set at the Diamond League race in Monaco in August.

During the hand over of the cheque, Wim Vanhelleputte, the MTN Uganda CEO said that as a company, they felt it incumbent to honour Cheptegei because of his unique achievement.

“To set a world record is no simple thing. So, as a country, we definitely have to celebrate him by honouring him for his success.”

In turn, Cheptegei expressed his delight for the reward in an acceptance speech that was summed up by teary eyes. Cheptegei said, “I feel humbled for the reward and recognition by MTN. And the fact that it is coming from the biggest telecommunication company in the country is even more pleasing.”

Cheptegei added that what MTN had done was truly motivating. He urged other corporate companies to come on board and support athletics in the country because there are many more talents in need of aid. Once that is done, more international glory will come to Uganda, Cheptegei emphasized.

A clearly excited Cheptegei spoke with so much verve and energy; one could hardly tell he had just come off a 20km training run in the morning before he travelled from Kapchorwa, he disclosed.

Already, Cheptegei is preparing for his next events: The 10,000 metres race on October 7 in Valencia, where he is targeting another world record, and the Half Marathon in Poland on October 17.

The world champion reminded everyone at the ceremony, that his failure at the IAAF World Cross Country Championships, back in March 2017, has inspired his success today.

“While so many people made fun of my mishap then, it was huge motivation not to stop dreaming, and here I am today,” Cheptegei reiterated.

Actually, since that time, Cheptegei went ahead to win silver at the 2017 World Championships in the 10,000 metres race behind Britain’s Mo Farah. Cheptegei also won both the 5000 metres and 10,000 metres gold medals at the Commonwealth Games in Gold Coast, Australia.

Such is the shortlist of the huge success Cheptegei has realized in the last three years. And apart from how MTN’s cheque will boost his life, his communication for the next one year has also been sorted. Every month, MTN will be giving him 12 GB of internet data, 35 minutes of call time and 36 short messages in what is dubbed the Cheptegei combo!