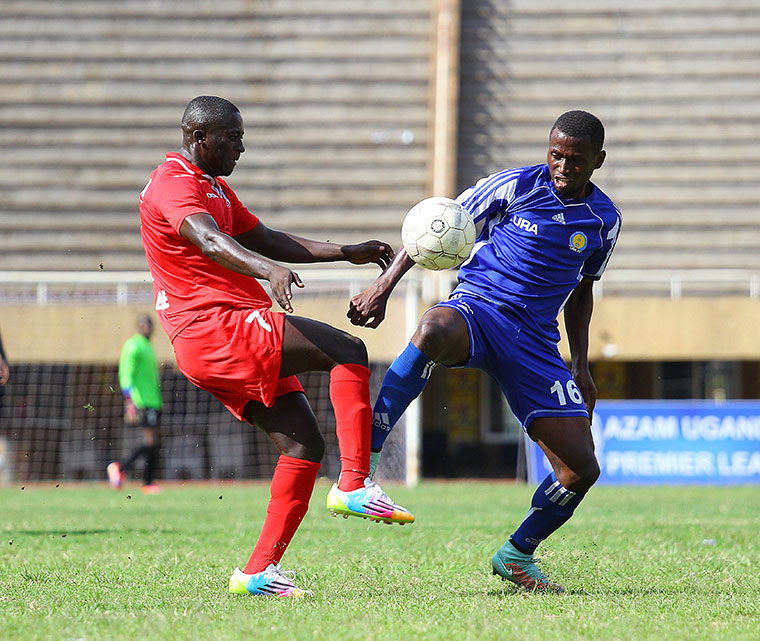 Yasser Mugerwa (R) in action for URA FC during a local league game in 2013. Mugerwa had a short stint at South Africa’s Orlando Pirates in the 2014/2015 season.

The list is long. Murushid Juuko, Milton Karisa, Shaban Mohammed, Yunus Sentamu, Juma Balinya, Dan Mzee Sserunkuma and Derrick Nsibambi are among the several footballers whose attempts at semi-professional and professional football were everything but successful.

Joel Madondo, Godfrey Walusimbi, Mike Sserumaga, Geoffrey Sserunkuma, Fahad Bayo and Brian Bwete are some of the other footballers who did well in the Uganda Premier League but were found wanting in the paid ranks.

Former Uganda Cranes captain Geoffrey Massa, who captained Uganda Cranes to a first Afcon appearance in 39 years, questions the mentality of many a Ugandan footballer. Massa would know well, having played in Egypt for a considerable time. He also had stints in the Premier Soccer League in South Africa before finishing his career in Cyprus.

“Many of our players are not given the right nurturing when they are still here,” Massa told The Observer.

“For many, all they think of is a sign-on fee and that’s it. But clubs, especially the ones in North Africa, will give you half the sign-on fee and thereafter monitor your performance, dedication, committment and enthusiasm.

“If all those factors suffer a dip from the player, they won’t hesitate to terminate your deal in an instant.”

Massa argues that most Ugandan footballers want to succeed the easy way without encountering hardship.

“Like every job, you have to give your best. Be early for practice, listen, be responsive, work harder and do everything to win over your bosses.

“The problem is that our players get engrossed in their sign-on fee and forget where they came from. It is a pity.”

Proline director Mujib Kasule, who has previously worked at a soccer agent, concurs. “Here in Uganda, we prepare our footballers on fitness and what to expect on the field of play.

“What we don’t do is schooling our players in the technical and mental aspect of the game. It explains why we have an abnormal turnover of players especially in North Africa.

Kasule cited examples of Ibrahim Ssekagya and Denis Onyango; two players who overcome ‘a million and one challenges’ to succeed at the highest level.

“The qualities Onyango and Ssekagya possess were born in them; they weren’t taught. Onyango struggled in Ethiopia and South Africa but at no point did he give up. He knew what he wanted.

“Ssekagya was earning literally nothing in Argentina but he knew that enduring the difficulties there offered him a better route to European football than returning to play in the Ugandan league.”

Today, Ssekagya and Onyango are two of the richest sportsmen in the country with highly successful careers that are etched in the annals of Ugandan football history.

Sulaiman Mutyaba, however, believes goalkeepers and defenders are better suited to do well out of Uganda than midfielders and strikers.

“Teams like the ones in North Africa will adore a midfielder and striker but he must be extremely special. Because the patience-span for players in those fanciful positions is limited in the mindsets of Arabs.

Mutyaba, who played in Tanzania, Sudan and DR Congo and retired from football a few months ago, says the issue of “how to prepare Ugandan players for pro-football” is one that can be addressed by the clubs, and no other institution.

“For as long as things stay the way they are, we shall continue seeing players spending a very limited time in North Africa or DRC.”

A national team player, who spoke to The Observer on condition of anonymity and has just returned to Uganda, intimated that some clubs are not true to their contractual obligations.

“For instance, a player like Milton Karisa was regularly fielded but every time he asked for his money, it put him at loggerheads with his bosses.

“Remember, we play for money. We don’t leave Kampala to go for Morocco, Tunisia, Egypt or South Africa for holiday. Give Caeser what is due to Caeser.”

Turkey-based Farouq Miya says that making it out of Uganda calls for a lot of hardworking. “Ultimately it comes down to your levels of sacrifice. How much do you want it? How self-driven are you? How focussed are you? It is a thin line between making it and failing. It is all in the mind.”

For every Onyango success story, there are fifteen to twenty Yunus Sentamu failure episodes. Undergoing that paradigm shift will take the efforts of clubs, academies, the federation and, most importantly, the ability of players to acknowledge that there is a salient mentality challenge that must be addressed.