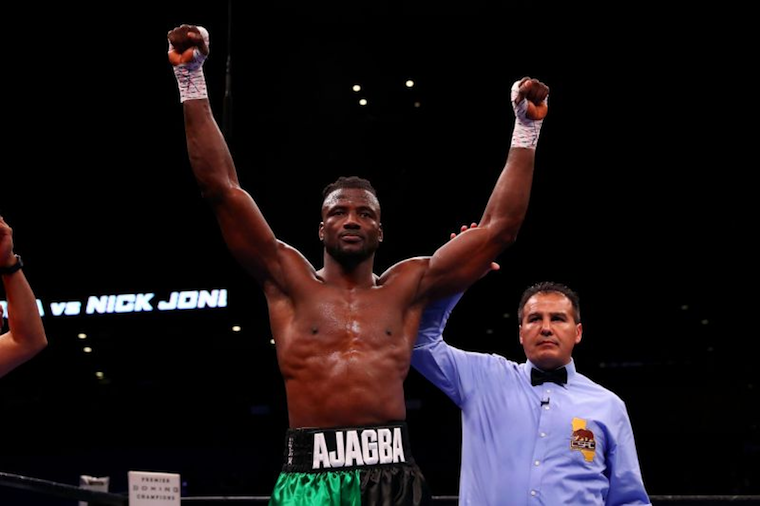 One of Africa’s most promising boxing prospects is unbeaten Nigerian heavyweight Efe Ajagba (13-0, 11 wins by KO), who recently made headlines by signing with leading promotion company Top Rank.

A former football player who turned professional in 2017 following a decorated amateur career (which included a bronze medal at the 2014 Commonwealth Games, Gold at the 2015 All Africa Games, and an appearance at the 2016 Olympic Games in Rio de Janeiro, Brazil), Ajagba’s first pro fight was in July 2017 and saw him record a first-round knockout of Tyrell Hendon.

He would win another four fights by knockout or technical knockout, before he became the holder of the fastest victory in pro boxing history, triumphing via one-second disqualification after his opponent, Curtis Harper, walked out of the ring in protest over a pay dispute for their bout in August 2018.

Now the 26-year-old, nicknamed ‘The One and Only’, has spoken of his desire to fight Anthony Joshua, the current WBA (Super), IBF, WBO and IBO heavyweight champion, on African soil.

British fighter Joshua notably has Nigerian ancestry and cited his trip to the Makoko slum in Lagos as one of the key inspirations behind his revenge victory over Andy Ruiz Jr in December last year to reclaim the titles he lost in a major upset six months earlier.

The prospect of a Joshua-Ajagba bout on African soil has echoes of the famous ‘Rumble in the Jungle’ in Kinshasa between Muhammed Ali and George Foreman in 1974.

“Absolutely in the future,” Ajagba said of the idea of facing Joshua in Africa. “It would be perfect. Two Nigerian warriors fighting in a title fight.”

“I wasn’t a boxer, he wasn’t a boxer. So I hit them, they fell. Boxing is different because fighters train everyday to get in the ring. When I started boxing they taught me foundations – how to move my legs, how to throw combinations.”

And Ajagba believes his skill as a boxer would make him favourite to overcome Joshua should the pair ever meet.

“Skill would beat Joshua, not power,” Ajagba explained. “Me and Joshua both have the power. But skills control the power, and I have more skills. The best weapon of Joshua’s is the left hook and right uppercut. He doesn’t have a good jab.”

The Nigerian continued, “The people would support Joshua because he is the heavyweight champ. I respect him. I respect everything about him – his talent and his potential. He is a humble guy. People are saying that I talk Joshua down. But I don’t want to do that. Joshua is from Nigeria, so he is a part of Africa, too.”

For local fight fans, there is greater action to enjoy on DStv and GOtv, who screen more boxing and mixed martial arts (MMA) on their ESPN channels.