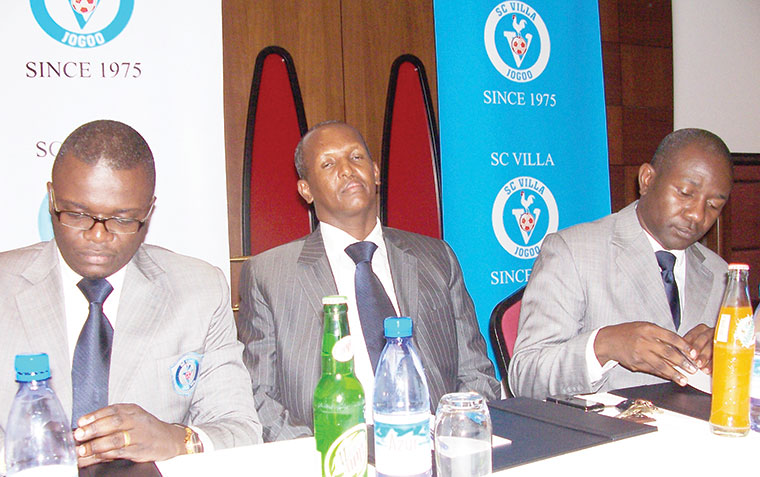 L-R: Fred Muwema, Ahmed Omar Mandela and William Nkemba on July 27, 2010 during the unveiling of the SC Villa Limited board. Muwema was the head of that board

In the fourth part of this series: Sixteen Years of SC Villa Drought, JOHN VIANNEY NSIMBE examines how despite both indicating in the early 2000s, that Franco Mugabe and Omar Ahmed Mandela were ceding control of the club, they still ghostly call the shots....

After Immanuel Ben Misagga’s election to the Villa presidency was robbed in October 2005, for some reason, Mugabe remained in interim charge. While it had to be until December 2005, Mugabe went on subtly in the background for another four years without really claiming to be the president, until Fred Muwema was handed the reigns in what was dubbed the new dawn.

Because of the lack of clarity on the Villa leadership, things were going haywire. The Villa players striked for non-payment in the 2009/2010 season. But later on, by the time the fans mobilized some players, and played the last fixtures of that season with eight players, to avoid disqualification by Fufa the club had missed three successive games.

Soon after that season, Mugabe handed Fred Muwema the instruments of power on July 27. Talk was about the ‘New Dawn’. But it turned out to be a false dawn. It is said that Muwema and the two historicals, Mugabe and Mandela do not talk anymore.

Apparently, they used not to attend the meetings he called as chairman, let alone remit the cash they had to periodically, to run the club. And that when Muwema was embattled with Fufa back in 2012, which led to the football governing body instigating the breakup of Villa into two factions, Mugabe and Mandela stayed away.

At the time, Mugabe and Mandela were accused of backing the breakaway faction. Mugabe categorically denied this, saying:

“We would never do anything like that to undermine someone we were committed to working with.”

“As a fan, I felt there was nothing wrong, since the team was playing in a Fufa-recognized league, and needed support.”
But when asked whether it was ethically right to have been part of the board that led Villa, yet go ahead and support a breakaway faction was not a betrayal of the cause, he said, “Well, I understand that now. But at the time, it was about saving the team.”

This demonstrates how Villa has been at a crossroads as far as what the right direction is. Agaba blamed the whole fraternity of the club: “Even when we became a board, we lacked a clear objective of what we were going to do and how. Somehow, we left everything to Muwema. But maybe he also did not do enough, to get everyone on board.”

Yet, having been around the club long enough now, Agaba is not oblivious about the real problem. Agaba said: “There is a problem of individualism and ‘historicals’ at Villa not recognizing that this is a community club. Somehow everything revolves around Mugabe, Mandela and Nkemba.”

Since Agaba showed his intentions to vie for the club presidency in December 2018, he was shut out of the club by Nkemba. Although he was involved in the recruitment of several players at the club, today he was locked out of the club meetings. “I phoned Nkemba many times until I gave up,” Agaba said.

Now, what has even astonished Agaba was seeing that Villa is now a Trusteeship on whose account this all remains a mystery. But Selegious Katongole, a former Villa official under Misagga, has an answer to all this: “Mugabe and Mandela never want to let go. So, whoever comes in to take the Villa leadership with an intention to act independently, they undermine him.”

Katongole explained that in 2010, from nowhere, Villa became a limited company. Then now, it is a trusteeship. And the common denominator in all these dealings are Mugabe and Mandela. Perhaps, until a way is found around the Mugabe and Mandela factor, the leadership question won’t be answered.