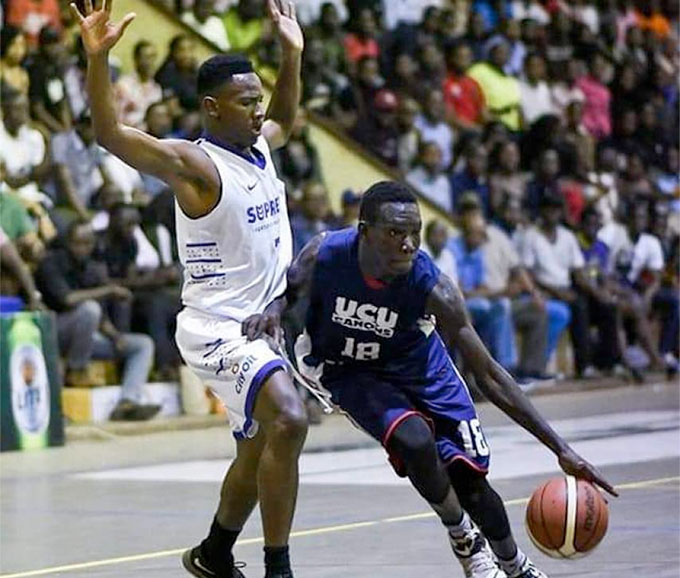 A basketball game between UCU and City Oilers

The cancellation of this year’s basketball calendar year by the sport’s governing body Fuba has led to speculation that a number of federations may follow suit.

August 1 falls on Saturday but with little to suggest that the Covid-19 pandemic is diminishing, the likelihood of competitive sport returning soon remains slim.

The Uganda Cricket Association (UCA), however, is doing its best to cope with the new normal while living in hope that action will be back in 2020. In a wide-ranging interview with UCA boss Bashir ‘Badu’ Ansasira, the 42-year-old told The Observer that the association has put its best foot forward through the distorted calendar year.

“We have spent in excess of Shs 40m in this period to look after people who are so dear to our game,” Ansasira noted on Monday.

“We have helped teachers and national team players for both men and women with the necessary essentials of food in this Covid-19 period.

“But we didn’t stop there; we also jumped in to help vulnerable workers who keep the game going such as groundsmen at the various ovals and other casual employees of cricket.”

Ansasira added that the UCA administration has constantly communicated via Zoom Online meetings to be ready to resume the calendar if or when the situation normalises.

“We have not decided that 2020 is a write-off. And neither have we decided that the season will be back.
“We are watching on keenly and doing everything necessary to be ready in the event that a positive decision is made on the return of competitive sports.”

Ansasira reserved special praise for the UCA CEO Martin Ondeko, the Operations Manager John Trust Mayeku and Acting Development Manager Davis Karashani Turinawe who, he says, have ‘led from the front in this period.’

“There is only so much I can do as UCA chairman; most of the work is done by the team I lead and all of them have been selfless in this tough period.”

To maintain players in a switched-on mode, Ansasira says UCA have kept a constant engagement with them.

“We have hired psychology specialists to tune their minds and help them develop their personalities and careers inside and outside the game. Our plan and vision is to grow and develop good, responsible individuals because not everyone is going to succeed as a cricketer.

“But we also can’t let them to go and sleep because there is no play in this period. And because of that constant engagement, we believe we can always call upon them to resume if we had to make such a decision.

“They [players] must maintain their fitness levels wherever they are because it is the right thing to do, anyway.”

He added that the next International Cricket Council engagement is next year and UCA will be ready once the dates are confirmed. In the meantime, the association has hired ex-cricketer Denis Musali as a communications specialist.

“From time to time, we have been doing things internally that need to be known out there in public and we feel Musali will do UCA a world of good,  considering he is a former cricketer who understands the game and the issues around it.”

UCA is planning heavily for 2021, Ansasira reiterated, and that whatever hasn’t been achieved now would be attained next year, by which time it is presumed life would have returned to normal. Ansasisa was elected as UCA chairman in 2017 in a poll where he beat Paul Nsibuka.

He was re-elected last year, against the same opponent, in a protracted vote that saw elections decided in a re-run. The first election had ended in a tie.