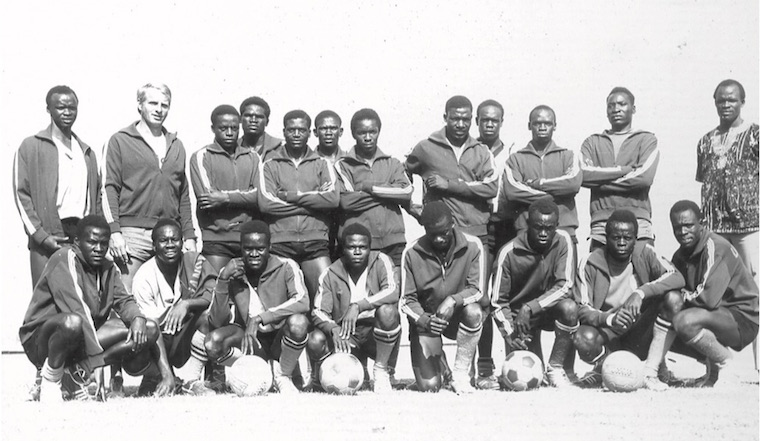 The Cranes team at the 1972 All Africa Games in Egypt. Government used to provide big incentives for the team to perform

Last week, several Cranes players took to social media to remind President Museveni of his $1m pledge to them after reaching the knockout stage of the Africa Cup of Nations.

Not to be left out, the She Cranes (national netball team) also reminded the president about the Shs 20m he promised each member of the team that finished seventh at the 2019 Netball World Championship held in Liverpool.

This flurry of demands by national team players coincides with the recent concern about the heroic 1978 Uganda Cranes team, which has many players languishing in poverty and in need of help.

Incidentally, that same team also faced the unfortunate situation when government’s monetary reward didn’t reach them, leading to a loss of morale in the years that followed.

In the seventies, it had become a habit for President Amin to reward outstanding international performances. In 1973, after winning the Cecafa Cup in Kampala, Amin gave the team cash prizes. Those with business mind-sets such as Swalleh Wasswa, John Ddibya, David Otti and Hassan Mutaasa, among others, were even rewarded with shops on Kampala streets that had been abandoned by expelled Asians.

In 1976 when The Cranes triumphed in the Zanzibar-hosted Cecafa Cup, Amin bankrolled the team to go to Libya for a shopping holiday and when they defended the title the following year in Somalia, Amin yet again lavished the players with a presidential dinner in which he gave each player undisclosed amounts of money.

So, it was strange that the team that finished runners-up at 1978 Afcon didn’t get the recognition or financial reward expected. In fact, there wasn’t any top government official to receive them at the airport upon arrival.

Of course, all this had to do with Amin’s focus on the looming war with Tanzania, leaving his powerful associate Lt Col Nasur Abdallah, also the NCS chairman, to oversee sports.

Players begrudgingly lamented about the missed prize money but could not come out in the open for fear of reprisals from some government officials but the anger exploded at the November 1978 Cecafa Cup in Malawi.

Upon touching down in Malawi, Cranes players resurrected their demand for the Ghana money. For one, Timothy Ayiekoh was the chief architect. He confronted Nasur who denied receiving the money on behalf of the players.

On the pitch, Uganda did enough to reach the semis but by then, the players’ agitation for their Afcon bonuses was just getting bigger. It was reported then that some individual players openly told Nasur that if they did not get their money, they would underperform.

Incidentally, The Cranes put on a lukewarm performance to lose 0-4 to Zambia and followed it up with a 0-1 defeat to Kenya in the losers match.

Shortly afterwards, Nasur warned that heads were to roll in Kampala but defiant players also threatened to forward their grievances to Amin. The stage was set for a collision course in which some players feared for their careers and lives if they lose the battle with Nasur.

However, by the time the team touched down in Entebbe, the war with Tanzania had intensified, leaving Nasur with no room to concentrate on the perpetrators.

The toppling of Amin in April 1979 dashed any player’s hopes of the bonuses and subsequent Cranes performances in the years that followed did not live up to the expectations.