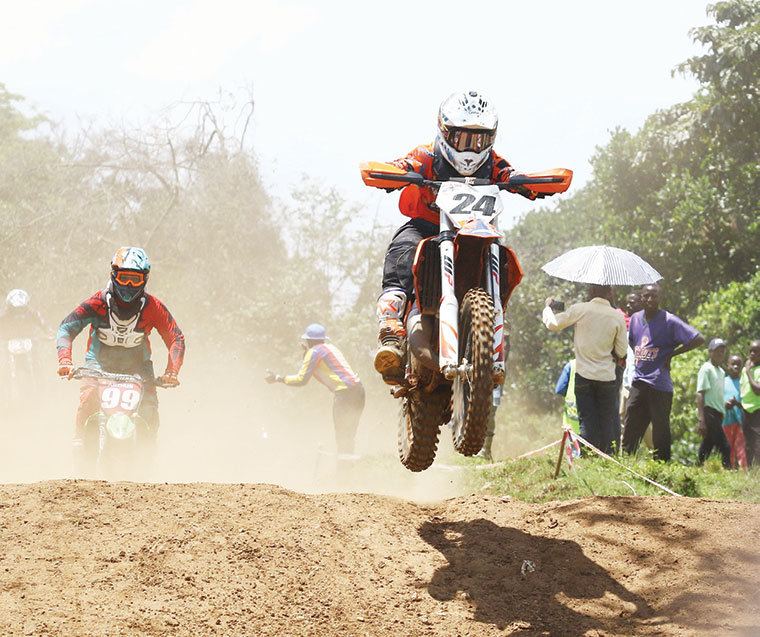 Motorcylists in action during a recent motocross event at Garuga circuit

From the time a break-away faction by the name Motorcycling Association of Uganda (MAU) was formed to push for full autonomy from the Federation of Motorsport Clubs of Uganda (FMU), this was always destined to be a protracted power struggle, writes MARK NAMANYA.

Barely a week after Dipu Ruparelia beat Dusman Okee and two others to become new FMU president, his leadership was thrown into the deep end with the emergence of MAU.

Since then, motorsport in the country has been hurled into a mini-crisis of sorts with no side showing signs of budging. On one hand, Dipu and FMU insist – rightly so – that they are the legitimate body affiliated to the international mother body FIA.

Secondly, Dipu and FMU have reiterated how they are the lawful body to run motorsport in the country and are recognized by the government of Uganda, something for which they have a National Council of Sports certificate to show.

But MAU led by motocross enthusiast and benefactor Barak Orland, a former deputy vice president of FMU, have stuck to their guns and started a page of their own. They say they have long been neglected by FMU and believe now is the most fitting time to begin the journey to full autonomy.

MAU have presented their grievances to the National Council of Sports (NCS) and mid this month held their first event of the season at Busiika, the same day FMU were holding their first NRC event of the motorsport calendar year in Mbarara.

The development has split MX groups and caused a web of confusion in motocross with riders and parents, who previously got along well, finding themselves on opposite ends of the divide.  Even the new minister of state for Sports Hamison Obua, a man known to champion dialogue through and through, has found himself stuck on how to find a middle ground.

On Tuesday, FMU and MAU held a meeting but Orland is said to have walked away early by those who attended. Meanwhile, Dipu has not objected to the issues raised by MAU but he has taken exception to the manner in which they opted to break away.

How this stalemate ends is anybody’s guess. According to sources, MAU have made their demands around the Armed Forces competition, which traditionally is not a calendar event.

The Observer has learnt that there will be a lot of money generated by that event and MAU is pitching towards managing it, and not FMU. Last weekend, FMU held its first motocross event of the season at Garuga and have reaffirmed that they will continue with their calendar events as they always have.

It can’t be good news for current and prospective sponsors on the developments in motocross and the man and machine sport would do well to see how the formation of two ‘topflight leagues’ in soccer set football so far back at the beginning of the last decade.

Motocross’ best interests would be served by individualistic egos being thrown out of the window for the best interests of young riders, parents, fans and sponsors. Meanwhile, in a joint statement issued last evening after their meeting chaired by NCS’ Tito Kayigwa, the warrying parties agreed to form a ‘Grievances Resolution Committee’, tasked to moot amicable solutions.