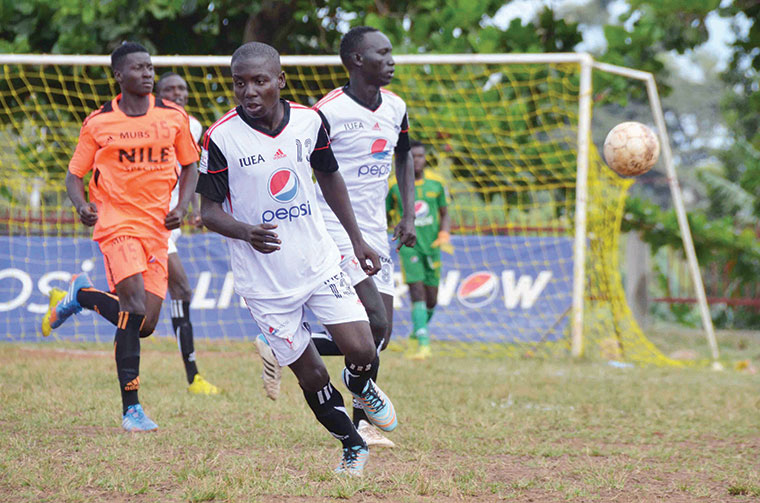 IUEA in action against MUBS last season which was their inaugural season. They played six games, drawing twice against KU and losing four to MUBS and UCU on home-and-away basis

The two sides were pooled together last season with both sides failing to get the better of each other after both games ended in goalless draws. Both teams failed to make it out of the group stage last season.

For Kampala University, this game is a must-win if they are to stand a chance to progress from the group stage this season.

“Last season we failed to make it out of the group stage partly because of these games where we failed to score. Out of the six games we played last season, we didn’t win any drawing five times,” Kampala University coach Vincent Tumusiime said.

He added: “This time round it is even more competitive since only the top team in the group is guaranteed to make it out of the group and so we need to be serious from the word go. I expect us to be more focused in our games and ruthless in front of the goal. No more missed chances.”

This is International University of East Africa’s second season in the Pepsi University Football League and coach Denis Latim is determined to make a good show.

“Last season was our first season; so, there were low expectations. We drew two games and lost four. This season we need to do better by getting a couple of wins under our belt and this game against Kampala University provides us with a good chance since we are at home,” Latim said.

In other games to be played this week, last year’s runners-up, St. Lawrence University are at home to Bishop Stuart University tomorrow, February 20 at their Crown Campus in Kavule.

St. Lawrence have established themselves as a powerhouse in the league which made them reach the finals last season where they lost to Uganda Christian University. The previous season they finished second runners-up after beating Bugema University in the third place play-off. And this season, coach Nnono Ssozi believes they should again be able to go all the way to the finals.

“As you can see, every season we have been improving. In 2018, we finished third. Last season, we were second. This season we believe we shall lift the trophy,” Nnono said.

But first, they will have to negotiate past a tricky group stage. St. Lawrence are drawn in the group of death together with two-time former champions MUBS and last year’s quarterfinalists, YMCA.

“The format of play this year is a bit tricky. You have to finish top of the table to be sure of making it to the group stage. And ours is the toughest group with MUBS and YMCA. We shall give it our best and I know at the end of the day, we shall finish on top of the group,” Nnono added.