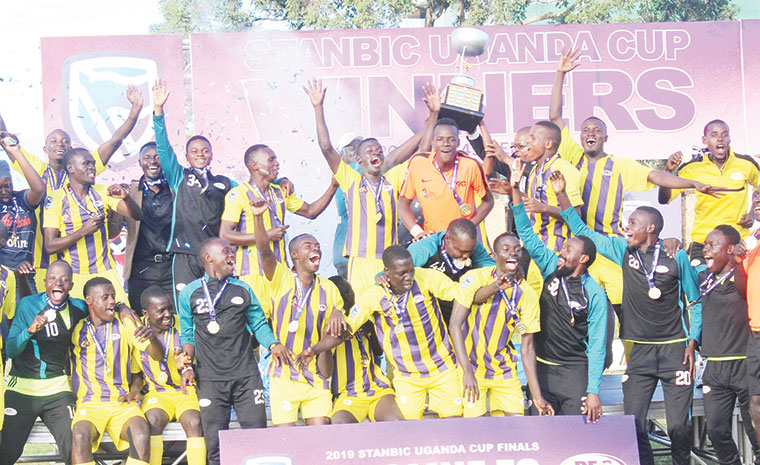 SHORT-LIVED HAPPINESS: Proline players celebrate their Uganda Cup triumph last May in Masaka. They have not yet received their prize

Uganda Cup holders Proline FC eliminated Tororo-based lower division side Admin FC 5-3 on penalties (after a one-all draw in normal time) in the round-of-32 last evening. But all is not well in Proline’s camp.

Proline, surprise winners of the prestigious knockout tournament after beating Bright Stars in the final last May, earned a trophy and Shs 40 million for their triumph. However, the cash prize has not come through yet they are grappling with financial hardships.

Mujib Kasule, Proline director, confirmed yesterday that local football governing body, Fufa, is holding onto their cash prize, which should have come in handy for the financially struggling club.

“We have sent several reminders to Fufa about our money to no avail; so, we’re wondering whether they will ever pay,” Kasule lamented.

Sources within Stanbic bank, the tournament sponsors, told The Observer last evening that the prize money was released to Fufa last August. Fufa distributes it to the winners.

Fufa assistant chief executive officer Humphrey Mandu could neither deny nor confirm when contacted yesterday. Mandu said he needed time to follow up on the matter.

He, however, defended the federation.

“Fufa depends on donations to run the game. Therefore, we also get into a state of financial constraint, because of the many activities we have to run,” he said.

This is not the first time Fufa is on the spot over remitting prize money to winning clubs. In fact, Kasule disclosed they have also not received Shs 10 million for winning the Fufa Big League in the 2018/2019 season.