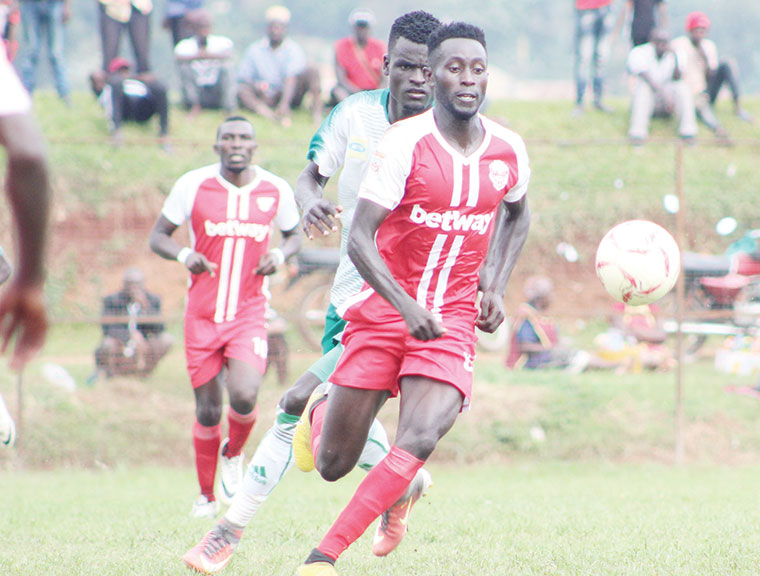 Express’ Daniel Shabena in action against Onduparaka FC last year. He is expected to lead his team against Police today

It is a sign of the times in the Uganda Premier League today that Express, once known as Mukwano Gwa Banji, are fighting for survival in the topflight.

The Red Eagles have blown hot and cold this season and, ahead of their visit to fellow strugglers Police, are occupying 11th position on the log after accumulating just 18 points.

They started the second round with a 2-0 defeat in Jinja to Busoga United and simply can’t afford to drop more points. A couple of seasons ago, Express survived the drop on the final day of the season and Red Eagles faithful will be wary of having to endure another nightmarish second half of the season.

The pressure on coach George Ssemwogerere has been intermittent but defeat to Police would heighten calls for the club chairman Kiwanuka Kiryowa to show ‘Ssimulala’ the exit door. Victory for Police would see the cops leapfrog Express on the table. Police’s last encounter was a much-needed 2-1 victory over Wakiso Giants and coach Abdallah Mubiru knows his side have little room for stutters as the league approaches the business end.

Mbarara United, beaten 0-1 by KCCA at Lugogo, will be aiming to return to winning ways when they host Wakiso Giants while Kyetume, who also went down 0-1 to table leaders Vipers, will fancy their chances against a troubled Tooro United team. In day’s final match BUL FC host Sam Ssimbwa’s URA. Ssimbwa, who is never far away from controversy, started the second round with victory of SC Villa.

But after that win, he was engaged in an ugly row with his former CEO Ivan Kakembo, with the latter insinuating that Ssimbwa had demanded for a budget to manipulate games in the first round, a request which was turned down.