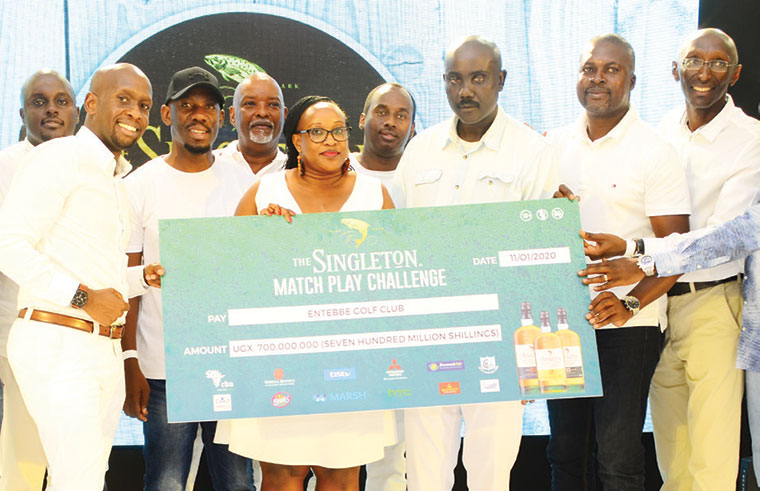 The fourth edition of the Singleton Golf Challenge started with oomph at the par-71 Entebbe course on Saturday, January 11.

With more than 250 entries, it was an oversubscribed event that spoke volumes for its burgeoning popularity among golfers. Singleton is not just about golf. It is much more than that. It’s 19th hole is second to none thanks to popular comedian Patrick Idringi Salvador whose jokes give the sizeable audience hearty laughs all night.

There was also BET Music Award winner Eddy Kenzo to entertain the crowd with his numerous hits including the newest favourite ‘Ssemyekozo’.

The all-white party made the evening glitzy and the décor and stage setting simply took the breath away. If the subsequent rounds of this year’s Singleton are to match last Saturday’s, then 2020 will be quite some year for the popular golf series. On the course, the qualification was played via stableford because of the numbers as opposed to medal.

And by the end of the night, the draws had thrown up some truly fascinating pairings at the round of 64. 2018 winner Sheila Kesiime and left-handed Gloria will partner Philip Walera and Jackie Kamunyu while last year’s quarterfinalists Wendy Angudeyo and Doreen Mwesigye will lock horns with Eve Magala and Irene Nakalembe.

Holders Robert Busingye and Richard Lutwama will do battle against Greg Patterson and Nicholus Hercules. Michael Alunga emerged best in Group A to win himself a night for two at the Serena Hotel. Meron Kyomugisha, who triumphed in the Ladies category, will also enjoy the same treat.

Meanwhile, there is a brand new Mitsubishi Pajero 2019 model that has been staked for a hole-in-one on any par-3 of course. The ultimate prize for the winners remains an all-expenses paid trip to watch the Omega Dubai Desert Classic in Dubai in January.

Busingye and Lutwama, last year’s winners, are due to enjoy their trip next week.