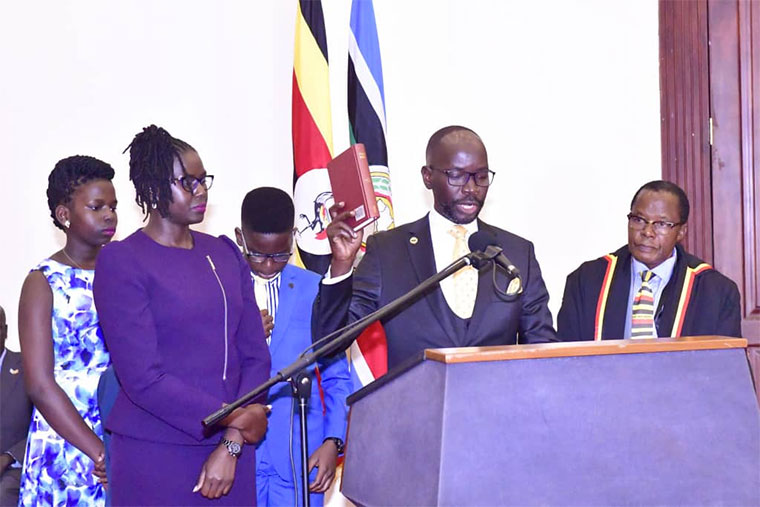 Hamson Obua swearing in as minister

The portfolio of state minister for Sports is one of the busiest in terms of keeping tabs on goings-on because sporting activities have no time for rest. In that regard, the lively and youthful Hamson Obua, the new state minister for sports, exudes the exuberance needed for the position.

It is also important to note that he is not an outsider brought to learn on the job because over the years, he has demonstrated huge passion for football mainly KCCA FC. I also find him to be smart and eloquent, a virtue that can endear him to all stakeholders in sport.

In other words, one could conclude that the sports fraternity got a balanced man at the helm. However, the jury is still out on Obua if his recent conduct is anything to go by.

For instance, it is on record that Obua is hobnobbing with disgraced people he has to superintend over. Top of that list is Moses Magogo, the convicted Fufa head who enriched himself by defrauding Ugandans of World Cup tickets.

Given that football takes the lion’s share of government sponsorship, it becomes unfortunately when Obua openly defends Magogo’s thieving actions, not to mention actively endorsing his self-aggrandisement. I am sure Obua has not read why his friend Magogo was convicted or he needs to visit the Uganda Law Society to get the definition of plea bargain. That’s when he needs to go through Bakkabulind’s notebook.

An old adage says that birds of a feather flock together but this would be harsh on Obua because I doubt he knows the true colours of Magogo apart from hanging out with him. The day Obua will know Moses Magogo could be too late to ask for a meeting with Denis Mbidde and Kavuma Kabenge to take him through the manuscript of Magogo.

On the other hand, I understand Obua’s predicament because he occupies a political office that may sometimes require him to take decisions that suit his own political interests. But to condone corruption as he has done with Magogo is unacceptable and this creates an unwanted precedent for all those in football leadership that you can steal as long as he doesn’t understand you.

This will further breed impunity and make accountability seem an excess for those in top sports administration positions. So, Obua has many sceptics to convince that he has the mettle to address corruption and mismanagement, the two biggest vices stalling Ugandan sport.

And that has to start with the people he works with or appoints to fill key positions in the sector. Many of the vital boards such as the National Council of Sports (NCS), Nakivubo stadium and Namboole stadium are occupied by people that have no vision for sports apart from picking up allowances and bribes.

These are individuals whose main job is to fight tooth and nail to remain on the board but with no ideas to make sports a self-sustaining sector like our neighbours in Kenya, Tanzania and Rwanda have done.

Do we still need the Nakivubo board after the mess surrounding the stadium? Or does NCS still need archaic figures to plan for it in this digital age? Meanwhile, Namboole stadium is a trove of business opportunities if headed by creative people.

So, the definition of Obua’s tenure in sport will start with the people he entrusts to promote sports in the country. Unfortunately from the way things look, the future is grim.

The ball is in his court.