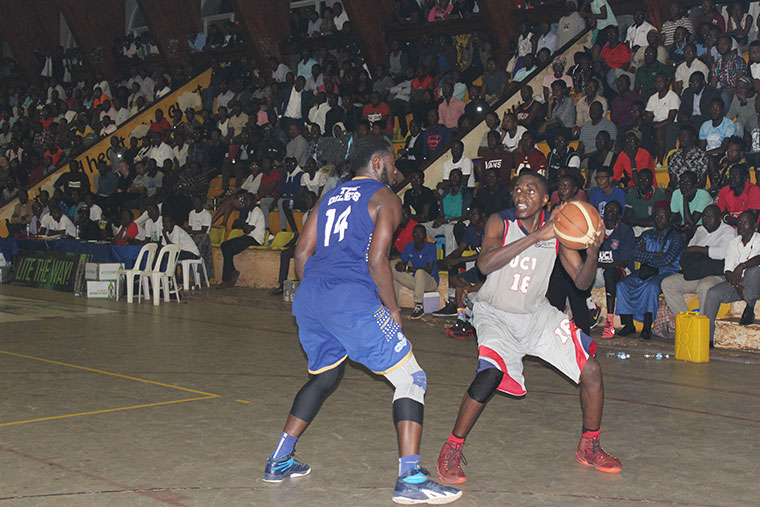 UCU Canons returned to the playoff finals of the National Basketball League on Wednesday night, November 17, for the first time since 2015. Incidentally, they met the same team, that beat them then 4-3 in the best of seven series, City Oilers.

Four years later, it is like City Oilers never moved an inch. They remain compact, steadfast, tough and above all, experienced, with the likes of James Okello, Jimmy Enabu, Ben Komakech and Daniel Jjuuko all a part of that thrilling night at the YMCA in Wandegeya, when Oilers downed UCU.

As though it was yesterday, Nick Natuhereza, the coach of UCU remains the mainstay from that team, which nearly won a first championship for UCU. Desmond Owili and Ivan Lumanyika, were the two post players, that prominently troubled Oilers, as Fadhili Chuma, who is now a key member of UCU, largely watched from the bench.

However, as Oilers have proved invincibility for the last six years, so has Natuhereza; marshalling two teams at the same time, both the UCU men and women’s teams into the 2019 final. How he executes such a double role, only he knows best. And the fact that on the opening night, his men beat Oilers 67-59, after the women beat JKL Dolphins 71-69, was remarkable.

“Well, I have handled these teams for many years now, and I can say, that I have become used to it. It comes like second nature to me,” Natuhereza said. That said, it cannot be easy laying strategy and focusing, when one has to deal with teams, considering the different dynamics entailed in their games.

But Natuhereza does not see it that way: “At the end of the day, it remains the same thing, basketball. What happens is setting a training programme for each party. Normally, the training sessions of the two teams fit within three hours. That is ninety minutes for each team.”

Nevertheless, it cannot be smooth sailing, because each team has different challenges before it. In order to conceptualize how to overcome them, detail is needed. And that can be mentally draining. Natuhereza said in response, “Well, when I am on the touchline coaching my teams, you will realize, that I handle the women and men differently, because both sets go through different emotions.”

He continued, that he is calmer, when directing the women, while of course more animated and tougher against the men. It is what they call the expert tact of knowing your players, and how to handle them, in order to get the best from it.

Although Natuhereza can be marked out as a coach, who has perfected the art of finding balance in man-management, avoiding the danger of mixing up game plans cannot be overlooked. Sport, being what it is, requires a lot of detail and explanation, when presenting tactics.

But Natuhereza does not think that is a problem. He said, “First of all, I have a good support cast of coaches. They are all involved in the tactical planning and the training sessions. It is a real team, that knows exactly what is needed to win games. And the whole of it works towards that set goal.”

Indeed, it is difficult to dispute Natuhereza’s assertion. In 2017, when he was away for studies, the women’s team successfully defended its title under the stewardship of his longtime assistant Emma Kiguyi. That had been the third successive championship by the UCU Lady Canons. Sheer dominance.

However, last year, the women, who appeared in their fourth successive final, were subjected to a sweep by the JKL Lady Dolphins. The 0-4 series defeat was humiliating for a team like UCU. They meet again this time for another best of seven series. And since UCU lost to JKL twice in the regular season, there is a feeling history could repeat itself.

Yet, Natuhereza does not think so. He pointed out how better they are as a team this time, compared to what they were last year. The team’s confidence has grown, as has their experience. You see, the final last year came at a time when UCU were still learning to play without Judith Nansobya and Ritah Imanishimwe, who had joined JKL and KCCA Leopards respectively.

This time, though, Rhoda Nagitta, Rose Akon and Priscilla Abei have come of age. On the other hand, JKL will be without Jamilah Nansikombi, who was their main protagonist last year, scoring most of their points. Nansikombi’s combination with Imanishimwe and Hope Akello was lethal.

Besides, UCU had a real test beating KCCA 3-1 in the semifinals, compared to the kind of opposition JKL faced in KIU Rangers from a technical point of view. JKL swept KIU aside 3-0. And whether JKL can match the same level of tactical and mental fortitude UCU showed coming from defeat in game one, to edge a highly fancied KCCA, is doubtable.

Natuhereza is hoping for a double swoop; where he can win both the women and men’s championship in the same season. But there is no pretending what he wants most. That is leading the men’s team to its first-ever championship. Oilers, who are six-time champions are tough, yet UCU was able to beat them once in regular season.

For a number of Natuhereza’s team members, this is their first NBL season: Fayed Bbale, Tyrone Martins and Jerry Kayanga. For the biggest lot of others, it is their second season, which means, they cannot boast of experience when they face Oilers.

It is unlikely to matter at this moment in time to this team, though. They just beat Power 3-1 in the best of five series in the semifinals. In fact, they lost game one in that contest to a team that had Isaac Afidra and Joseph Ikong, two former champions. But as Natuhereza’s last word was, to this team the ‘nothing to lose’ attitude has made them fearless, a huge reason they are one game ahead, going into game two tonight.