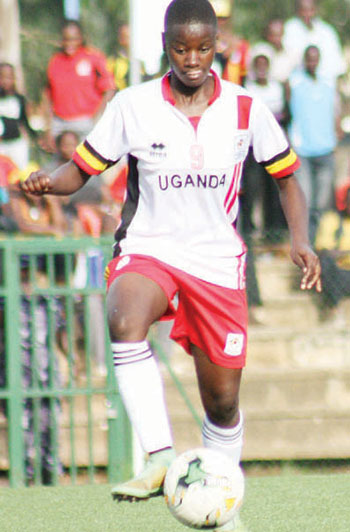 The 19-year-old tops the five nominees for the award. Shadia Nankya, Hasifa Nassuna, Fauzia Najjemba and Daizy Nakaziro are the other contestants for the award. The winner will be announced on December 14 at Speke Resort Munyonyi during the annual crowning gala for the best-performing footballers and coaches in the country. Apart from plaques, the female and male footballer of the year will each drive away in a new car.

But her nomination for the award was based on the excellent performances for Kawempe SS in the schools championships, Kawempe Muslim Ladies FC in Fufa Elite Women’s League and the national teams in various international tournaments.

For instance, she captained Uganda U17 girls’ national team to victory the Cosafa Championship. She emerged top scorer with 18 goals. She helped Kawempe Muslim to win both the national and East Africa Secondary Schools championship.

She started to get playing time at Kawempe Muslim after the departure of striker Sandra Nabweteme at the beginning of the 2016-7 season. Since then, she has established herself as the school’s most valuable player and also became one of the prominent female football players in the country.