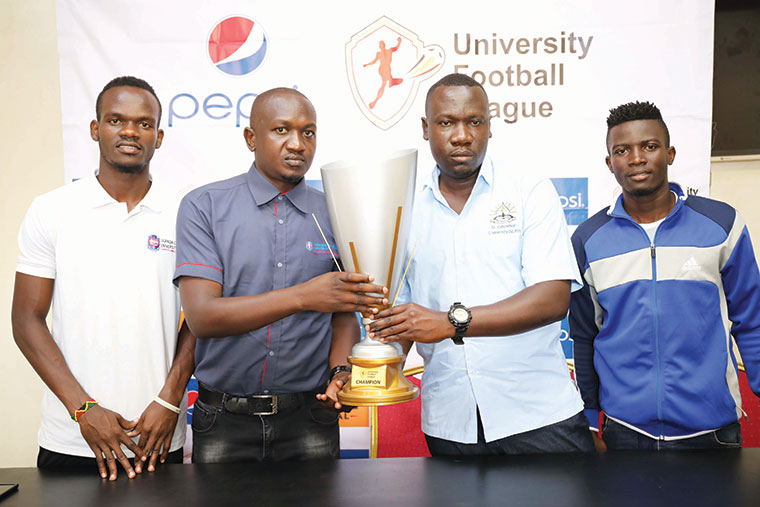 The Pepsi University Football League finale that had been called off due to the state of the Namboole stadium pitch have been rescheduled for November 10 at KCCA stadium Lugogo.

Both UCU and St Lawrence are making their maiden appearance in the final, having had to overcome tense semi-final ties only making it after penalty shootouts. UCU, who beat Bugema University 2-1 in the first leg of their semi-final tie, lost 1-2  in the return leg at Bugema, forcing the game into penalties. Captain Derrick Were was the hero after saving two penalties and scoring one for the Mukono-based side to make it to the final for their very first time.

St Lawrence similarly needed a penalty shootout to reach the final after both legs against Uganda Martyrs ended in 1-1 draws. Gita Musa was the hero on that day, saving three penalties for the Lubaga-based side to also make it to the Final for their very first time.

It promises to be an exciting final as both teams like to play attacking football. Speaking ahead of the final, Uganda Christian University coach Kintu Mwera said that the team is focused on lifting the trophy.

“Having made it this far, we believe this is our season. We are very focused and determined and are looking forward to the game. It has been our dream for the last six years to play in the final and now that we are here, our dream is to lift the trophy,” Mwera said.

His counterpart Nnono Ssozi said that St Lawrence are going into the final as underdogs but like David they will fell Goliath.

“I believe we are the underdogs in this game. We are David and UCU is Goliath and we all know who wins in such a battle. Last season, we were bronze medalists and this season we are looking at gold which will be a good reward,” Nnono said.