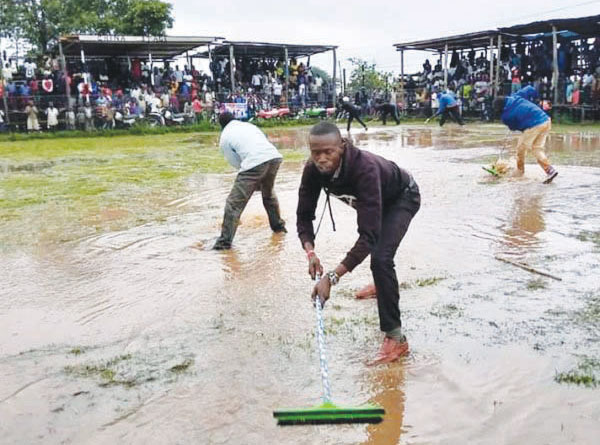 Last week, Fufa suspended some of the available stadia from hosting games after pitches became unfit for play due to the heavy rainfall that pounded the country since mid-October.

According to communication from Fufa chief executive officer, Edgar Watson, some of the affected venues include Betway Mutesa II Stadium, Wankulukuku and Mandela National stadium, Namboole.

“At first we thought the challenge was minor and would be contained but it’s too much,” Bainamani said, admitting that they did not heed the meteorological authority’s warning in earlier this year.

In August, the Uganda National Meteorological Authority announced that the seasonal rainfall would last up to early January, 2020.

“You cannot blame any of the affected teams now because by the time the playgrounds were cleared to host matches, they really met the required standards. Probably the challenge lies in the management of these playgrounds because, as a country, we lack experts in pitch management,” Bainamani stated.

He said they will also consider the option of switching more games to the Fufa Technical Centre, Njeru, which currently hosts BUL FC’s home matches. Uganda’s top flight leagues have 34 clubs (16 in UPL and 18 in Big League) but many, especially those that are based in Kampala, lack own playgrounds, opting to rent from available facilities.

Save for KCCA FC and Vipers SC – others in the two folders ride on the mercy of the league organisers to compete as hosts from various grounds including Namboole, Wankulukuku, Mwererwe, Kavumba, Kyabaggu and others within Kampala and neighbouring areas – a situation that isn’t too different from upcountry teams.

These facilities, at most, are shared in hosting different teams and activities – a situation that piles pressure onto the playing surface with the torrential rain - only facilitating an already volatile condition. Fufa and UPL are under pressure to avoid any delays in domestic competitions’ schedule as the country prepares to host the regional Cecafa Senior Challenge Cup later this year.