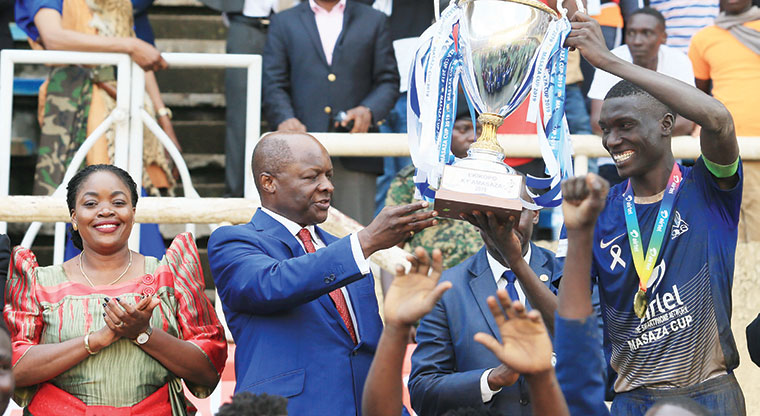 Last Saturday, I watched in awe as Bulemeezi defeated Busiro to win the 2019 Masaza Cup. To be honest, there is little to write about that transpired on the pitch because the combination of poor weather, poor pitch condition and poor approach of both teams set up a dull affair.

However, there is no doubt that the biggest winner of the day was football. I say so because there was pessimism in some circles leading up to the final. It was borne out of the notion that the absence of perennial contenders Buddu and Ssingo would not attract a huge crowd.

That, however, turned out to be wrong and if anything, it showed there should never be any form of influence to favour a particular team based on fan-following. But beyond the celebrations that followed the Kabaka’s handing over the trophy to Bulemeezi, organisers of the tournament need to have a candid evaluation of the tournament to take on a higher level.

Bulemeezi is champion but what happens between now and the start of the 2020 edition? Most likely, the core of the players will move on to club football, where they will be barred from returning to Masaza competition. Those who will stay are the young prospects who are still students.

On a broader perspective, Masaza Cup offers huge lessons to other similar competitions in other kingdoms such as Busoga, Tooro and Bunyoro, which have their own versions of the tournament.

So, what if Masaza organisers enticed their counterparts to pit the respective champions in a mini-tournament?

I am sure that would draw a lot of attention and following because unlike any other football competition in the country, Masaza is purely borne out of passion of heritage and identity. So, the extension to reach out to other regions is like hitting two birds with one stone because it would awaken the spirit of belonging in the wider Uganda, not to mention attracting more sponsors.

Meanwhile, over the years, I have noted a number of selfless individuals whose efforts elevated the Masaza tournament to be what it is today. These are individuals who sunk in millions of shillings or mobilised their people to make Masaza Cup a major tournament on the local football calendar.

Lastly, I am still appalled by the distorted literature on the tournament. Oftentimes, media personalities believe the tournament is a recent creation but Masaza has been around since the forties.  For instance, there are records to show that legendary John Baptist Semanobe was part of the Busiro side that won the 1964 edition after defeating Kyadondo.

In fact, the creation of Wankulukuku stadium in the early 1960s came partly as a result of the Masaza Cup when organisers wanted a permanent venue for the tournament after years of sharing Nakivubo stadium with other competitions. Therefore, proper documentation of the tournament will not only give the important historical perspective but also offer a guide to the future and how best it can be sustained.