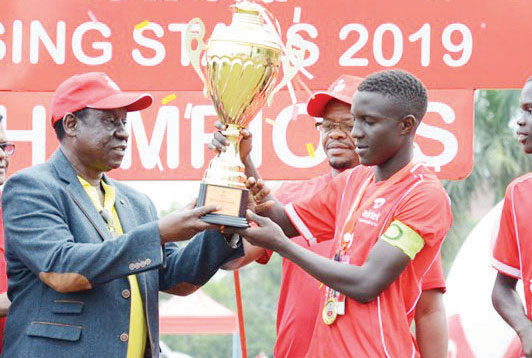 After traversing all regions in the country, this year’s Airtel-sponsored Airtel Rising Stars (ARS) football tournament climaxed with a grand finale on September 7 at Makerere University Business School grounds, Nakawa.

In the end, it was Eastern and Kitara regions that walked away with the top honours, which included cash, medals and trophies. Eastern region clinched the boys’ category trophy after beating former champions Kampala 3-2 on post-match penalties. They settled for a goalless draw in normal time.

Goalkeeper Ashraf Mwabye was the hero for Eastern as he saved two penalty kicks. Mwabye was also named the best goalkeeper of the tournament.

The triumph was sweet revenge for Eastern, who suffered a 1-3 loss to Kampala in the group stages of the competition. Eastern scraped through the group stage at the expense of West Nile, who fell 0-2 to lowly-rated North East in the deciding match. They progressed to the final with an emphatic 3-1 victory over Kitara region. Kitara were drafted into the semifinals after Northern, the would-be opponents for Eastern, were disqualified for fielding ineligible players.

Meanwhile, Kitara region beat Eastern 2-0 to retain the girls’ title. Kitara fielded the same side that won the 2018 title in Fort Portal, save for the addition of at least three players. Winners in both categories received Shs 7 million while runners-up got Shs 5 million.

In his remarks, Airtel Uganda Ltd managing director VG Somasekhar said the telecom company remains committed towards developing talent across the country through the annual tournament.

“As Airtel, we a proud of the journey we have moved so far since the start of the tournament in 2011. We believe this is the best way we can give back to Ugandans for the support they have shown us,” he said.

He added: “We are committed to giving back to this country through the game of football and we hope to see you next year, even bigger and better.”

Fufa president Moses Magogo presided over the finals. He hailed Airtel Uganda Ltd for their consistent job of helping the federation in youth development projects and girls’ football development.

“I would thank Airtel for the continued support to the game. Since your arrival, the game of football in this country has changed tremendously. There are many first-time things we have seen in this period; as Fufa, we promise to work harder,” Magogo said.

Airtel Rising Stars remains the only local nationwide underage tournament in which the winning team gets prize money starting from region where winners walked away with Shs 1.5m this year.

Since its inception in 2011, the annual tournament has nurtured hundreds of footballers into international stars in the professional leagues.