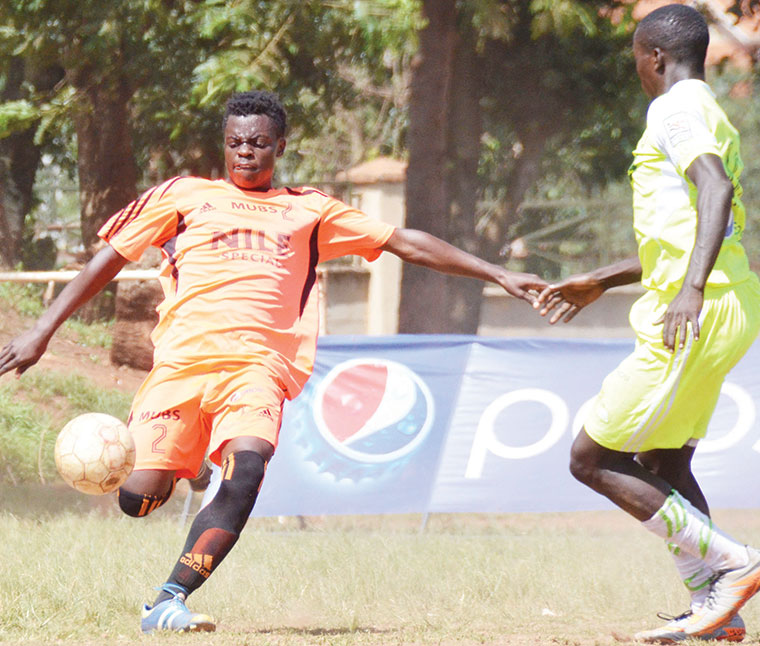 Action between MUBS and Kampala University in the first round

It will be a repeat of the 2017 final in the  Pepsi University Football League (UFL) when Makerere University Business School host former champions Nkozi in the first leg of the quarterfinal match this afternoon, reports ALFRED OCHWO.

The two sides last met in the final at Namboole where Uganda Martyrs won 2-0 to lift the trophy for their first time. Prior to that, the two sides met in the 2015 final which Mubs won 4-0 to lift the trophy for their second time. Mubs coach Charles Ayiekoh expects the game to be an entertaining one that his side will win as they chase a record third Pepsi University Football League trophy.

“It’s been a long time since we lifted the UFL trophy and this year I feel that we have a very good squad that can lift the trophy again,” Ayiekoh said.

He added: “Last year and in the first round this year, the squad was still weak but now we have strengthened in all areas with some very good recruits and I expect we shall make it all the way to the final.

“Uganda Martyrs are a good team. They are no longer the team that used to be easily beaten and managed to beat us at Namboole in 2017. But out of the seven games we have played each other, we have won six and they have won one and I am confident that on Wednesday we shall make it seven UFL wins.”

However, Uganda Martyrs coach Noah Mugerwa has different ideas about the game.

“Mubs are a strong team especially when they are playing at home. But we are also a strong team and the last time we met, we won albeit on neutral ground. I expect it will be a tough game but we shall definitely go away with a win,” Mugerwa said.

In the other quarterfinal matches, YMCA will host St Lawrence University on Friday, September 6 in Buwambo. Bugema versus Kyambogo and Busitema against Uganda Christian University (UCU), Mukono complete the last-eight lineup.