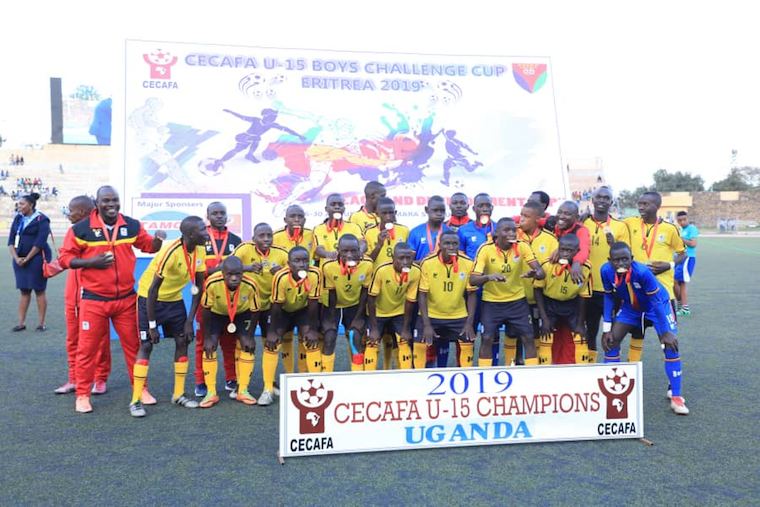 Uganda is the champions of the inaugural Cecafa U-15 Challenge Cup that ended in Asmara, Eritrea on Friday.

Coach Jackson Magera’s team humbled arch-rivals Kenya 4-0 to win the trophy. The president of the Confederation of African Football (CAF) Ahmad Ahmad together with Football leaders from the Cecafa region graced the final.

Devis Ogwal and Travis Mutyaba gave Uganda a 2-0 lead at half time before Abasi Kyeyune netted a second-half brace to take his tally in the tournament to nine.

Later Uganda’s technical bench made several changes including Shafiq Magogo, son of FUFA president Moses Magogo who came on with 10 minutes to the end. Not even Kenya's star player Kevin Wangaya Injehu was given chance to shine.

“I am happy that we have lifted this trophy and the boys have done what I told them to do,” Magera said after the game.

His counterpart Sagar Lakhani said he was happy with his boys despite the loss in the final. “We could not march the Ugandans physically. But am happy the boys got good exposure in the tournament,” said Lakhani.

Uganda scored a record 23 goals in the inaugural tournament and conceding none. In the earlier play-off game Rwanda beat Burundi 4-2 in penalties after the game ended 1-1 in 90 minutes.

Uganda were awarded the trophy and medals, while their striker Kyeyune was received the top scorer’s award. Kenya’s Alvin Odari Lwangu was voted best goalkeeper, while Eritrea’s Temesgen Tesfay was voted best player of the tournament.