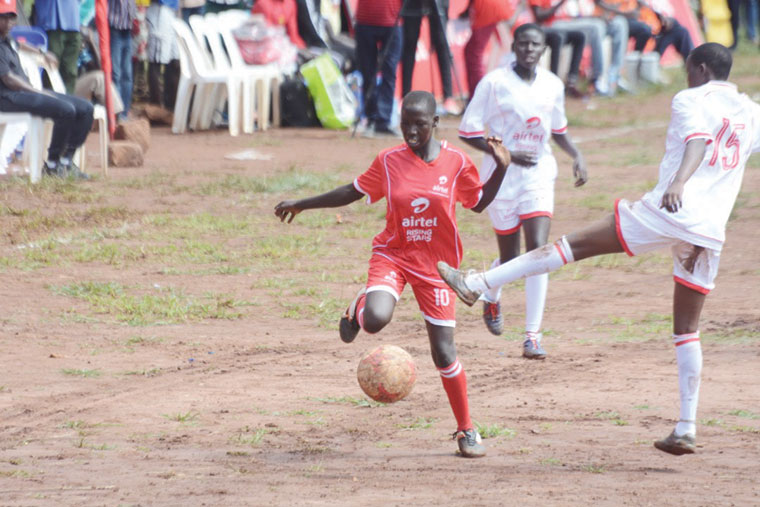 Airtel Rising Stars (ARS), an under-17 tournament that commenced in 2011, has so far promoted a big number of players through its ranks to professional football.

This is in line with future preparations of Uganda national senior ladies’ football team, The Crested Cranes, to play in bigger continental tournaments.

“In our review of the past tournament, we realized few girls’ teams have been taking part and we decided to have more emphasis on girls this time. The more girls participate in this tournament, the more chances of national women’s soccer team coaches picking good players,” Bugonzi said.

However, even in this year’s edition, girls’ teams have not yet turned up in big numbers as expected. A region like Buganda that has over ten districts during regional finals held in Luweero recently, less than 10 girls’ teams took part yet each district was allocated two slots in the regional finals.

But Bugonzi says they are still trying to sensitize schools and individual to allow girls kick the ball since Airtel Rising Stars remains the biggest tournament in as far as giving girls chance to play football is concerned.

Last weekend, West Nile and Northern regions played their finals in Lira but both regions did not have more than 10 girls’ teams. Some team coaches lack facilitation for long distances from one region to another.

For instance, one of the team coaches in Lira, who preferred anonymity, said: “It is hard to facilitate a team from Koboko to Lira and that is why some teams are not participating in the tournament. This leaves a few that can get facilitation to enjoy the tournament without much competition.”

Meanwhile, Koboko Boys and Simba were crowned West Nile region champions last weekend in boys’ and girls’ categories respectively. For Northern, Pece United and Amugu SS won the regional championships. This weekend, Western and Kitara regions will be playing from Masindi, with a total of 14 teams in both girls and boys expected to take part.