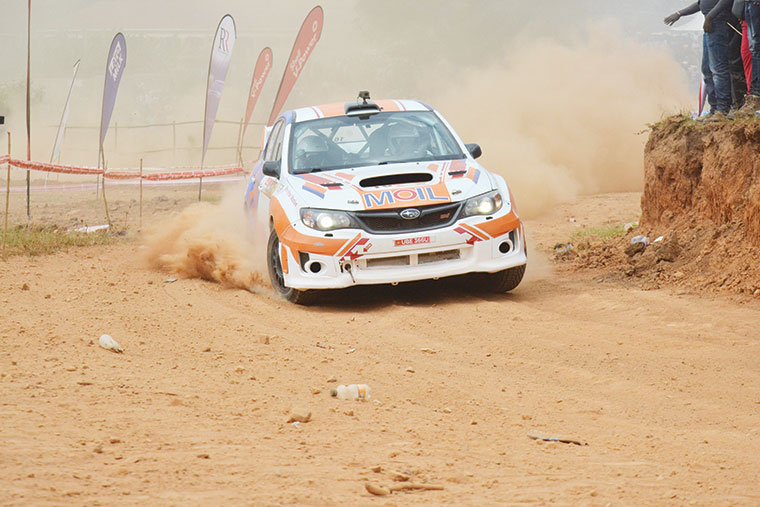 Buoyed by his respectable performance in the recent Pearl of Africa Rally, the hitherto little-known Yasin Nasser has vowed to fight for the national title, reports ELLY KYEYUNE.

Kenya’s Manvir Baryan won the 21st edition of the Shell V-Power Pearl of Africa Uganda rally that took place on August 2 and 3 in parts of Luweero and Kayunga districts.

The reigning African rally champion showed intent to retain the Pearl crown (which he has won for the last three years) from day one after he won the super special stage in Busiika crossing the line in three minutes and 17 seconds. The Kenyan completed the rally of 100.27km (competitive) in two hours, two minutes seven seconds and 14 microseconds. He beat second-placed Yasin Nasser by 23 seconds.

Baryan, who made his rallying debut in the 2011 Guru Nanak Rally in a Subaru Impreza N14, acknowledged that he did not get any hard time during the Pearl rally. Most of his would-be competitors dropped out in the early stages.

Ronald Ssebuguzi, who was expected to give stiff challenge to Baryan, stalled in the second stage (the 22.35km Sheik Mehta section) on day two after his car engine failed to restart due to turbo complications. Jas Mangat and Ponsiano Lwakataka, the other Ugandan drivers expected to challenge, also retired after mechanical breakdowns in the first stages on day two.

However, Ssebuguzi’s co-driver Leon Ssenyange said despite the fact that none of their close competitors in the national championship (NRC) scored a point, local title race is still open. But Nasser, who came second overall, scored points to climb from the fifth position to the top of the log.

Nasser, who was the best Ugandan in the rally, was so excited for his performance and reckons he will be under pressure in the Uganda Motor Club (UMC)-organised Fort Portal rally due next month.

“I am so happy with this performance but after taking the NRC lead, it will be tough in Fort Portal rally because eyes will be on me,” Nasser said after his respectable performance in the Pearl Rally.

“And I can’t wait to beat the big boys again; I am now ready for their challenge,” he added.

He was the most excited driver on the final day after collecting the maximum 140 points towards his national championship (NRC) tally. He now leads the NRC title race with 285 points, 45 better than second-placed Ssebuguzi.

Before the Pearl Rally, Nasser was fifth on the NRC standings with 145 points. He started the season with distant eighth and ninth position finishes in the Mbarara and Masaka rallies respectively. He improved to a second-place finish in the Mukono rally two months ago.

He is optimistic of finishing the final three rounds in better positions and win his maiden NRC title. This year’s NRC series was reduced to seven rounds. Three rounds in Fort Portal, Hoima and Mbale remain on the calendar. Meanwhile, Arthur Blick Junior, who finished third in the Pearl rally, surrendered the second position to Nasser with just four kilometres to flying finish after his car got a puncture.

The rally attracted only two foreign drivers; Dharam Pandya from Tanzania and the eventual winner, Manvir Baryan. Seyyid Kakeeto, who has been a rally organiser for the last five years, blamed the poor foreign drivers’ presence to rowdy fans in spectator stages.

He added that organizers should also give some other incentives apart from offering free registration to foreign drivers.