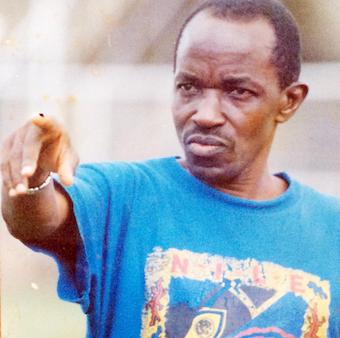 Jimmy Jacob Muguwa belongs to the creme de la creme of Ugandan football. A Uganda Cranes great, he is one of the few star players to immensely succeed on the touchline.

Muguwa, 67, breathed his last on September 7 after months of poor health and was later laid to rest at Kihande in Masindi.

He is mostly famed for participating in two Africa Cup of Nations (1976 and 1978) and guiding Express FC to league and cup doubles as coach in 1995. In his illustrious career, he also inspired Uganda Commercial Bank (UCB) FC to the 1979 league title on top of helping Express win the 1985 Uganda Cup title.

Here is an abridged version of my 2010 biography of Muguwa. For all his greatness, Muguwa’s career somehow remains in the shadow of more glamorous players and his achievements underestimated.

At the Mulago hospital playground where he nurtured his football skills along with Jimmy Kirunda, Tom Lwanga, William Kityo and Emma Mugerwa, among others, the soft-spoken Muguwa could play in all attacking positions and his rare skills attracted Lint FC, which signed him in 1971.

After a successful stint at the club, the tricky player moved to Second Division side Uganda Commercial Bank in 1973. While there, he carved out a niche as an entertainer and scored several goals in a cheeky way, always preferring to use a back heel instead of a simple tap-in.

UCB was still a lower division side in 1975 but that didn’t stop Muguwa from attracting the attention of Central Province coach Jabaeri Bidandi Ssali, who also doubled as Uganda Cranes manager and KCC FC coach.

Bidandi drafted him into the Provincial team and it took just a few weeks before Bidandi included him in The Cranes side for the 1975 Cecafa Cup held in Zambia. This was an unprecedented feat for a player in the lower division.

Things even got better when UCB gained promotion to the top-tier in 1976 and the Bankers finished a respectable seventh in their maiden season. In 1978, Muguwa scored an incredible 24 league goals as UCB ended the season fifth. The club also reached the final of Uganda Cup.

In 1979, it was Muguwa and UCB’s year. His combination with Sam Okiror as centre forwards, right and left wingers Fred Serwadda and Fred Musisi respectively, was bad news for opponents. He guided UCB to the 1979 league title-finishing the club’s top scorer with 16 goals.

Though Muguwa was a utility player, he found it hard to cement a starting place in The Cranes and his national team records are full of substitute appearances.

His best Cranes moment came in 1976 when he travelled to Ethiopia for the Africa Cup of Nations. He didn’t feature in the opening match against Ethiopia but started the second game against Egypt before he was substituted for Denis Obua.

In the last group game against Guinea, Muguwa scored Uganda’s consolation in the 85th minute in the 1-2 defeat. Muguwa was also part of the Cranes side which reached the final of the 1978 Africa Cup of Nations in Ghana but remained a reserve player throughout. He played in four the Cecafa Cups (1976, 77, 78 and 79) and retired from The Cranes in 1982.

At club level, he ended his long career with the Bankers in 1982 when he joined Express FC. He scored some vital goals for the Red Eagles and was made club skipper for the 1983-1984 season.

His best time for Express came in 1985 during the final of Uganda Cup against KCC. He headed in the third goal in 3-1 win which gave Express its first trophy in eight years. In 1986, he was appointed as assistant coach/player but in 1987, Muguwa retired from football.

Later that year, Muguwa was part of the 12 Ugandan coaches who took a one-month coaching course in Germany. When he returned he spent a short stint with Express and later crossed to Rwanda to handle Mukungwa FC. He returned in 1991 and handled UCI.

He returned to Express as David Otti’s No.2. In 1995, Muguwa was named head coach. He guided the team to the 1995 league and Kakungulu Cup titles and also guided Express to the semi-final of Africa Club Championships. To date, that remains the club’s biggest achievement. As a result, he was named Uganda Cranes assistant coach.

When Express recruited Serbian Dragan Popadic as head coach in 1996, Muguwa felt disrespected and left the club to handle a couple local sides, including Police FC. Muguwa returned to Express in 2002 but shortly afterwards, he got injured in a car accident along the Kampala-Jinja highway.

This partially disfigured him and from then on, he lived a life of a pauper. This greatly broke down his mental health and at one time, he worked as a dish washer at Nakivubo stadium.

He remained a recognizable figure but all that remained in name as he struggled with poverty. Matters were not helped when it was announced that he had dementia and at the time of his death, the once national darling was confined in a solitary single room.

Muguwa died a frustrated man and along with him goes his treasured national records.