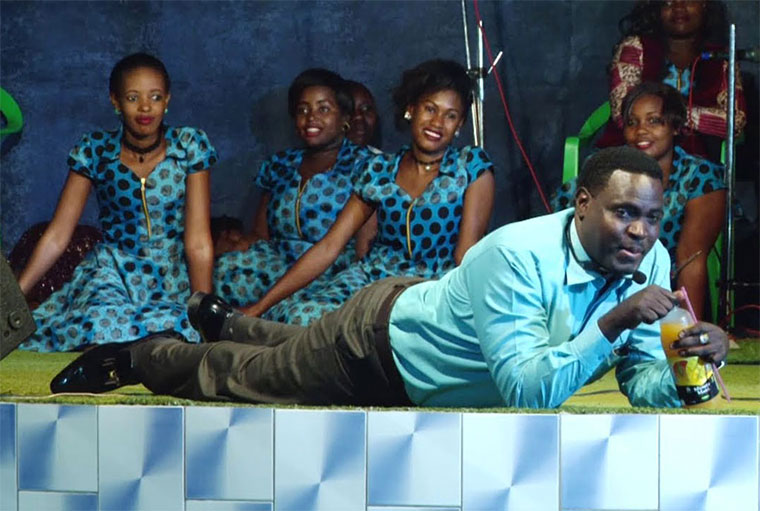 Pastor Augustine Yiga alias Abizaayo, the founder of Christian Revival Church Kawaala, willed to be mourned for five days and then be buried at his church according to his family.

Yiga passed away on Monday night at Nsambya hospital where he had been admitted with liver complications. Farouk Ssemaganda, the head of communications at Yiga’s ABS TV, said the deceased pastor willed that he's buried after five days of mourning.

According to Ssemaganda, the deceased’s lawyers, say his will indicates that his body should spend five days in the church to allow his followers to pray for him and celebrate his life. He also reveals that Yiga willed that he should be buried behind his church next to the grave of his mother, Elizabeth Kwagala.

Hundreds of emotional believers and followers are still thronging the church to pay their last respects to the deceased pastor. Alice Mbabazi, the head of ushers at Revival church told URN in tears that they have lost their father who has been everything to them.

Christine Nalubega, also a member of Revival church says Yiga was a caring loving guide and a true man of God. She says that the pastor prayed for her eyes that were sick since her secondary school years in 2006 and she got healed.

She disputes claims that Yiga has been staging fake miracles and media reports that the deceased has been part of the group pastors who have financially ruined many people’s lives.

Born on April 25, 1976 in Bukomansimba district, Yiga died aged 43.
WHAT WILL BE MISSED ABOUT HIM
Yiga earned the name Abizaayo because of his claims that he had powers to send back evil spirits or witchcraft from wherever it originated from. Ssemaganda says Yiga was first admitted at Life Link hospital about three weeks ago from where he was diagnosed with liver complications.

He was transferred to Nsambya hospital where breathed his last around 10 pm on Monday. The deceased was loved and hated in equal measure because of his humorous preaching style. He also often came under scrutiny when some accused him of neglecting the children they sired with him.

Several members of his church said they will miss his fun-filled preaching sessions such as ‘Kiki kyoliffa tewelabidde’ loosely translated as what will you not forget till death, which would air on his ABS TV each day of the week. In Kiki Kyoliffa tewelabidde, congregants would share bizarre occurrences in their life as the pastor probed them.

He would often task the congregants to demonstrate or illustrate how the weird things happened. He would also ask them to reveal the identities of the people they think are behind their predicament. Alice Mbabazi has been an usher in Christian Revival Church for over five years.

According to Mbabazi, Yiga’s preaching was enjoyable as he often engaged the audience with illustrations where it was necessary to ensure the audience grasped the message. Bright Muyingo, who is also a preacher in Nabweru, says he first met Yiga in 1998. According to Muyingo, Yiga who helped many young pastors to establish themselves was determined to succeed since his youthful days.

Christine Nalubega met Yiga in 2006 when she was at university. According to Nalubega, Yiga gave her hope and asked her to pray for miracles that would eventually, happen. Muyingo said it would be inappropriate for people to castigate Yiga for his mistakes. Muyingo said people should always pray for each other and should be touched when a person dies but not to criticize people for their life misdeeds.

Yiga’s life hasn’t been rosy as he has been in and out of jail for various reasons. In March this year, Yiga was arrested for uttering false information and spreading harmful propaganda regarding the spread of the novel coronavirus disease, which had just been confirmed in Uganda.

Police accused Yiga of using his ABS TV to declare that there was no coronavirus in Africa because no deaths had been registered at the time. The footage of his video recording about COVID-19 went viral on social media as it was widely shared on Facebook, Twitter and WhatsApp.
In February 2019, Yiga was arrested by Kawempe police station on allegations of raping and impregnating a female worshipper in his church. His arrest didn’t go down well with his followers who staged a protest at Kawempe police station dismissing the accusations against the pastor who was picked up shortly after his return from South Africa.

He was released after he accepted to take a DNA test to establish the paternity of the child in question. However, the case ended prematurely as it never reached court. In September 2014, a woman dragged Yiga to Nabweru Magistrate’s court for allegedly raping her leading to a pregnancy.

Brenda Nalubega accused Yiga of forcing her into sex and infecting her with HIV when she visited his church for prayers and counselling. At the time of the suit, Nalubega had been evicted from her rented room together with her child. Yiga later committed himself to look after Nalubega’s son and provide a monthly stipend of Shs 150,000.

He was sued again in October 2015 when Nalubega accused him of backtracking on his promise to provide for the child. Yiga agreed to resume the payment of the monthly fee. He was whisked away from inquisitive journalists by a special hire taxi. Nalubega died in 2017 after battling unknown illness for some time.

Yiga was born on April 25, 1976, at Mpaama village in Bukomansimbi. His mother, Elizabeth Kwagala and father Joseph Matovu died in 2018 and 1995 respectively.

Yiga started his church in Kiwuunya in 2004 and relocated to Kawaala in 2005 where he established Christian Revival Church. Yiga, who once a kadongokamu singer, used his music skills to prop up several music artists including Maggie Kayima alias Nabbi Omukazzi, Hassan Nduggwa and Benah Namisinga.

I loved the comment of another thug called Mr Jackson Ssenyonga of Life Christian who accused Yiga of unbecoming behaviour not fit for a religious leader.

"I am not saying these words because I hate him, but I want to open people's eyes that there are fake pastors in Uganda. I tried to access him when he was sick to see that he gives his life to Christ, but it was not possible.,"

To senyanga, Yiga died a sinner since he did not give his life to Jesus. I wonder who told Senyonga that it is Jesus who takes people to heaven if at all
Report to administrator
-1 #2 Lakwena 2020-10-29 14:25
That Pastor Yiga "willed to be mourned for five days and then be buried at his church according to his family." is his ugliest side.

In other words, it is unforgivable, arrogant and hubris for bon-afide a lessor Christian, with questionable moral character or servant of God, to demand for such attention after his demise.

Hubris is defined as an overwhelming, excessive, exaggerated self-confidence arrogance. It is associated with poor character or socially uncultured personality.

I can imagine Jesus, the humble of the humblest, while on the cross, asking his disciples, who had not fled the scene of his execution; instructing them for his body to be mourned for 5 days.

Yiga's Hubris is the same arrogance and ugliness with which e.g., on 26th January 2017; Mr. M7 told Ugandans/world that he is nobody's servant or employee.
Report to administrator
-1 #3 Lakwena 2020-10-29 14:42
From psychological point of view; "Conceited Flamboyancy" is usually associated with people who are hiding their dark-side/abominable crimes.

In the worse cases, they are underworld evil worshipers concealed under hood of "altruism", religious holiness and/or form of political power/righteousness.

E.g. by always throwing money at impoverished Ugandans and promoting his UPDF and Police officers, Mr. M7 is actually hiding his dehumanizing selfishness of fighting only for himself while sacrificing the whole country's meager resources, including building roads in DRC.
Report to administrator