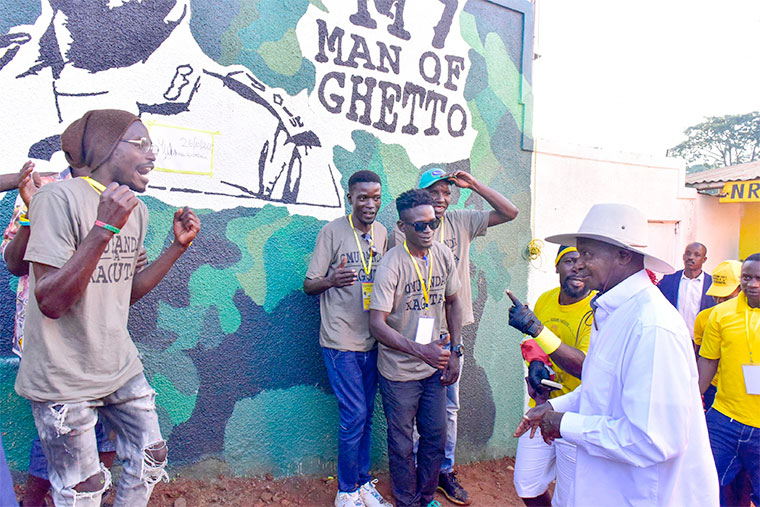 President Yoweri Museveni’s recent incursion into the ghetto with wads of cash and political appointments has opened up wide public debate and drawn new attention and importance to a turf that was once Bobi Wine’s exclusive preserve.

In recent months, the president has not only doubled his presence on social media particularly Twitter and Facebook but has also reached out to musicians like Bebe Cool, Catherine Kusasira, Butcherman, Eddy Kenzo and, Full Figure.

Those who know his modus operandi argue that in reaching out, Museveni is not running scared, but he is being himself – a man who doesn’t leave anything to chance, who doesn’t underestimate his opponents. Museveni’s new opposition is now in Kyadondo East Member of parliament, Robert Kyagulanyi Ssentamu, aka Bobi Wine.

The self-styled ghetto president has already declared he is running for president in 2021 riding on his People Power informal structures. Political observers however, wonder whether it was wise for Bobi Wine to declaring his presidential run almost two years to the general election.

This, they say gives the president ample time to weaken Bobi Wine and his political vehicle People Power even before the first vote is cast. Social Media commentator, Abbey Kibirige Ssemuwemba says Bobi Wine made a mistake to declare his presidential run too early because he will be stretched financially. He says Museveni now has ample time to punch holes in Bobi Wine’s little preparations and turn many opposition leaders against him.

“Not even Museveni is capable of issuing such a statement now till when he has been endorsed by the NRM delegates’ conference, yet everyone knows that he is going to stand,”Ssemuwemba says.

Museveni’s incursions into the ghetto give some credence to Ssemuwemba’s assertions. Museveni seems to be firmly focused on shifting the battleground to Bobi Wine’s backyard and force him to fight the war on NRM’s terms.

In appointing Buchaman as a presidential advisor on the ghetto, Museveni, according Mukono municipality MP Betty Bakireke Nambooze, is getting Bobi Wine’s people to fight him.

“Using the carrot, Museveni is now recruiting the city riff-raffs and musicians not because of the value they bring to his NRM but because he wants Bobi to be fought by his own. The Buchamans are not therefore useless as their status would have dictated; they are commanders in the satanic battle the junta is going to wage against a leader of the oppressed and disadvantaged young people who are the majority in the country. So when General Museveni saluted Butcherman he meant it,” Nambooze said.

But Bugiri Municipality MP and Justice Forum President, Asuman Basalirwa thinks that in reaching out Museveni has realized the significance of various stakeholders in the country who have been ignored for long. “It’s good that he has come to the realization that this segment of society is part of the people he leads which is a welcome development. I know he appears to be caring but he is doing this for his personal political gain,” Basalirwa said. Abdul Katuntu, the Bugweri County MP, said in reaching out to the poor youth, Museveni is doing what any prudent politician ought to do.

Should Bobi get worried?

Political pundits opine that Bobi Wine has no reason to get scared because his constituency is solidly behind him. However, recent political developments in the country show that a combination of the carrot and stick, in Nambooze’s words is enough for Museveni to coast to victory. Those who resist him, Nambooze says, are subjected to all manner of humiliation and those who support him are abundantly rewarded like Bebe Cool and Catherine Kusasira.

Joel Ssenyonyi, the People Power spokesperson, says for Museveni to wake up now and cozy up to the ghetto is outrageous.

“For 34 years, Museveni has impoverished, marginalized and ignored the ghetto. Tired of indignity and discrimination, the ghetto rose up to speak, led by the ghetto president, Bobi Wine. Museveni dismissed the ghetto thinking it is good for nothing, but right now he’s scared and desperate…” he said, adding, “He’s trying to brand himself as man of the ghetto, thinking the ghetto people will fall for his comedy, but the ghetto people know better than to be taken for a ride. For Museveni to come out now and bribe ghetto people yet he has denied them services all this while shows what kind of leader he is, a transactional leader, not a transformational one.”

For Basalirwa, this rapprochement will achieve nothing beyond a few artistes who he says have no following among Bobi Wine’s core base.

“What we stand for is known and what Museveni stands for is also known. Our agenda and ideology are very different from what Museveni stands for. For us, we represent a generation, a future and Museveni represents the past. The ghetto he’s going to is the segment we represent –the Uganda of tomorrow and there is no convergence in aspirations. So his overtures cannot scare or undermine our support,” Basalirwa says.

He adds that they have been the ghetto representatives all this time and he doesn’t see that changing. “Bobi Wine must not react in any manner but just remain consistent with what he stands for because even those who are leaving what do they accuse him of? Has he abandoned the cause? If they believe that Museveni is now so good and they can abandon a person they have been with for a long time, then we wish them well,” Basalirwa said.

Interviewed for a comment, Government and NRM spokesperson Ofwono Opondo said those sulking about Museveni’s incursion into the ghetto forget the president has always recruited from this group starting from his 1980 Luweero war.

“Some of the successes of the NRM engendered urban explosion, which has led to many people in urban areas getting marginalized leading to discontent. As a democratic and responsive government, you respond to the challenges that have been created by your own success,” Opondo said.

He said the country should remember that Museveni and the NRM expanded the frontiers of the music industry, which he also joined in 2011 with a song; Another Rap.

“It was the NRM that gave people the liberty to sing about what they want and Bobi Wine is a product of Museveni, and the NRM.”

“If Bobi Wine or his loose mouth spokesman Joel Sseyonyi want to define his narrative as a very popular man scaring even the NRM, let him define his narrative that way, in 2021 we will disprove him. They are sulking because the false shadow they have been using of young people, ghetto people and musicians is no more as we respond; we are pulling the rug from under their feet. If you say this government doesn’t care, why should they complain when it reaches out to the so called ghetto? Is the ghetto a monopoly of Ssenyonyi? If Butcherman or Catherine Kusasira is useless so to speak, why would people think that the person who was also in the ghetto, Bobi Wine, is now a politician with a brain?” Opondo said.

this man finds common ground with these lazy lot; why doesn't he tell them to go back to the village to do farming. (RUDI SHAMBANI, KAMATA JEMBE!) That's the way we grew up, producing cotton or coffee and cash crops to pay our fees!

Don't forget Rubangakene, the guy wants the youths out of the village so that he grabs their only heritage, being the land.
Report to administrator
-1 #12 Apollo 2019-11-07 15:15
Mr. Kyagulanyi and his strategic team need to keep doing a few important things in order not to lose the ball.

The fundamentals associated with the Bobi Wine phenomenon need not be lost. When the Ivorian President Houphouet Boigny tightened the noose around Reggae artist Alpha Blonde, the later did what he knew best, which was to release more radical, critical music with heavy political overtones.

Bobi Wine owns this territory and Gen. Museveni cannot touch it. No force in history has successfully shut down a message delivered through music. One key upcoming activity Bobi wine should release a song about is the Voter Register update.
Report to administrator
0 #13 Mubiru 2019-11-07 15:27
Museveni's weaponizing (ie using ghetto as a weapon) for votes, the same weapon for which he vociferously condemned Kyagulanyi is beyond parody.

Apparently Museveni was never aware that they are people who were born and raised in Ghetto like Bob Wine and that is why he needs advisers like Kusasira (whose ghetto back ground is even dubious}and other hand picked fortune chasers to be his rumour informers.

It is ridiculous nonsense that our President who "advised" Bob Wine to concentrate on singing and leave politics to politicians is the same man who cannot see Kusasira and Sali aka a Bebe Cool who are only known as singers to involve them in politics.
Report to administrator
0 #14 Lakwena 2019-11-08 08:18
Quoting Mubiru:

Apparently Museveni was never aware that they are people who were born and raised in Ghetto like Bob Wine and that is why he needs advisers like Kusasira (whose ghetto back ground is even dubious}and other hand picked fortune chasers to be his rumour informers. ...

Mw. Mubiru, the Devil left Hell in 1981 and now resides in our State House.

E.g. through a scotch-earth policy, from 1986 to 2005; Mr. M7 ghettoed the people of Acholi in dehumanizing IDP camps. Confined 20 years in the IDP Camps, you can only imagine how many Acholi youths are illiterate, poor and diseased.

What did Hitler do to the Jews (6 million) whom he resented so much? He ghettoed, starved, gassed, shot and buried them in mass graves.