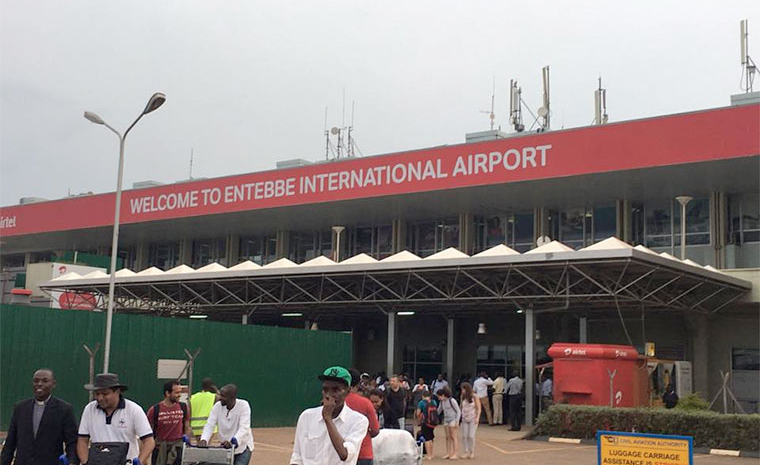 The World Health Organization (WHO) has ordered for the mandatory Ebola screening of all passengers entering the country through Entebbe international airport.

Initially, airport authorities were screening only passengers returning on flights from Democratic Republic of Congo (DRC). However, according to Simon Ebachu, the head of Ebola screening, WHO has instructed that all passengers entering the country to be screened.

The mandatory screening comes at a time when DRC is struggling to contain an Ebola outbreak that broke out in August 2018 in the North Kivu Province, along the border with Uganda. According to statistics from the ministry of Health in DRC, at least 700 people have been infected with the Ebola virus since it broke out. Of those infected, 370 have died.

As part of the mandatory screening, more than 40 health workers have been stationed at the airport to screen all passengers.

Ebachu says that the passengers will be screened using an automatic thermal stand that screens people's temperatures as soon as they arrive at the airport. He also indicated that as soon as one is detected, he or she is taken to an isolation centre at Entebbe referral hospital.

Bonny Natukunda, the district health educator, Wakiso district, says that the government is training different Village Health Teams (VHTs) to handle Ebola cases in case they occur in the community.

In May, the ministry of Health reinstated Ebola screening at all border posts.

0 #1 Akot 2019-01-14 19:16
WHO should note that Ebola/cholera...are diseases rampant in under developed/developing countries, thus, the need for good governance with obligation to National Education for ALL children, if the world is to be spared this plagues that cost too much lives & money, yet come on so often!

The increase in poverty, thus diseases in developing countries is due to bad governance that gives the majority poor left out no education with only 1 option - have children even when they can't feed nor educate them!

What use is UN/WHO today when bad rule & lack of education for ALL children which is KEY to development, is not handled?

Migration destabilising USA/Europe is due to bad rule sending the millions left out looking for life in developed world!

Yet UN shakes hands with demon rulers incapable of providing for the people they pretend working for!...
Report to administrator
0 #2 Akot 2019-01-14 19:24
....Ah! withou shame, UN renders USA/Europe responsible for safety of migrants dying/blocked from reaching these developed worlds!

But, UN does not mention that the first help migrants get is clean water to drink then Healthcare; those sick are given first aid then hospitalised, pregnant women who want their babies born in USA/Europe give premature births but are tken care of & are so happy their kids are born out of shitholes!

Why is it USA-Europe responsible for miseries of good life seekers, while the useless rulers they are fleeying are at peace, attend UN meetings, get economic help/donations & for what?...
Report to administrator
0 #3 Akot 2019-01-14 19:28
...UN/WHO do know that there would be no developed country giving healthy clean/safe living to their people, if Good Governance & Education were not thier priorities, right?

Even Agriculture is subsidised by governments in USA/Europe!

Would USA/European leaders dare misrule/cause war situation that send their people looking for better life outside & UN would accepts it, build camps-force other countries to take poor Americans/Europeans in?

We are tired, ashamed of Ebola, Cholera, wars...that are illnesses fueled by lack of/under development caused by bad rule that gives no Education to enable people build healthy societies through clean living -development!
Report to administrator
0 #4 kabayekka 2019-01-15 03:55
Who in his or her mind would wish to visit a country suspected to have Ebola.

It is unfortunate indeed that such a problem must end as soon as possible so that the economy of the country can progress.
Report to administrator
+2 #5 Lakwena 2019-01-15 16:17
Without the outbreaks of deadly diseases like Ebola, WHO would have closed shop long time ago.

In other words, for purpose of relevance; WHO, WB (World Bank) IMF etc. are the evil offspring of the UN , out to create international social, political, economic and health crises.
Report to administrator
+1 #6 Akot 2019-01-15 21:15
Quoting Lakwena:

Without the outbreaks of deadly diseases like Ebola, WHO would have closed shop long time ago.

...for purpose of relevance; WHO, WB (World Bank) IMF etc. are the evil offspring of the UN , out to create international social, political, economic and health crises.

These so called world money hungry bodies have brought the world on knees, while robbing nations of all decency!

Uganda under Museveni is heaven for them & they wouldn't want to be under theat of Ebola...!

Ugandans must really wake up; the country formed by tribal lands cannot he shithole for Ugandans, yet paradise for Museveni-WHO-IMF-World Bank-UN & refugees!
Report to administrator