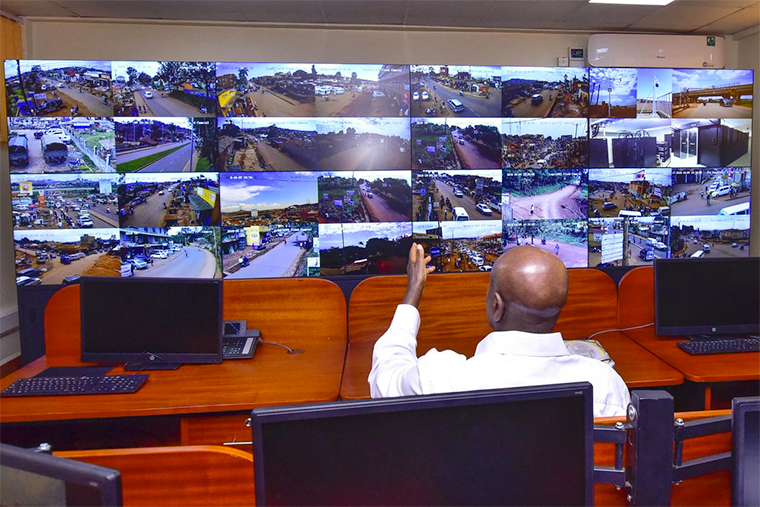 With the installation of Closed Circuit Television (CCTV) cameras in urban areas, "the game is finished" for city criminals, President Yoweri Museveni has said.

While launching the national safe city CCTV project in which at least 359 CCTV cameras have been installed in Kampala over the last three months, Museveni said now criminals can be monitored from near and far, during the day and night, before and after crime.

“I could see by day and by night and not only seeing but actually recording so even if you come back afterwards you can roll back and see. But this one will also help me because even me in State House, I can now plug in and see who didn’t respond. Because it not only help me respond but it also helps me to monitor these sleeping policemen because I will not only be seeing the criminals but also these sleeping policemen and women. The game is finished, it’s finished for the criminals.” Museveni said.

The project is part of a government strategy to fight urban crime and beefing up security in Kampala Metropolitan area. The cameras so far installed, cover the areas of Rubaga and some parts of Kawempe Division on the outskirts of Kampala. They include fixed cameras, rotational pan tilt zoom (PTZ) cameras, facial recognition and numberplate recognition cameras.

The cameras are powered by a feed that transmits images and videos through cables to a specific server created by the National Information Technology Authority (NITA-U) Uganda. NITA is providing high speed connectivity for the CCTV network over the national data transmission backbone infrastructure.

Acting police director for ICT Felix Baryamwisaki is optimistic that the cameras will aid investigation and enhance surveillance in areas around the capital city where more crime cases have been recorded over the years. He says that real time footage will be accessible to different police units.

“Once you appear anywhere where the cameras are, we shall be able to correlate with the database when it gives an alarm then we’re able to know that this person is at this place. And that is for specific areas like automatic numberplate recognition cameras are on highways, at exits of divisions…for example if you’re from Jinja road division going to Mukono, there is a a numberplate recognition. Now the facial recognition we’re putting them at places which are unique like parliament, where we’re getting passports - internal ministry, main police stations, those are the areas."

The government is planning to install 3,233 cameras in the districts of Kampala, Wakiso and Mukono. It is also in the process of setting up temporally command centres at Nateete police building, central police station (CPS) building and Naguru police headquarters. Up to Shs 400 billion is needed to construct a national CCTV command centre at Naguru.

The temporary command centre which is housed in a room on the fourth floor of the Nateete police building covers a space of 12 meters by 6 meters with 21 desktop computers and a wide wall screen viewing different cameras.

At the time of the launch at Natete police, there were 21 police officers, 3 Chinese national experts and four other civilian IT experts in the command centre - all walking barefooted on the carpeted floor with their shoes left out of the room whose access required a fingerprint identification.

Minister of Security Gen Elly Tumwine says that even the lack of street lighting in various places will not affect the functioning of cameras which have an infrared feature. The second phase of the project which is supposed to begin in June 2019 will be for trenching, networking and installing cameras on highways, municipalities and small towns across the country.

Police are also in the process of talking with owners of commercial places like arcades, shopping malls and hotels to allow the directorate of ICT tap into their CCTV cameras and be able to link them to the national CCTV project, according to Baryamwisaki.

We’re not getting into people’s homes, however for commercial business we’re in cooperation with them and only look at what is being done there.” said Baryamwisaki.

The government has been pushing for the implementation of national CCTV project since March 2017 when Assistant Inspector General of Police (AIGP) Andrew Felix Kaweesi was gunned down in Kulambiro, a suburb of Kampala together with his driver Geoffrey Wambewo and his bodyguard Kenneth Erau.

On that day, Museveni issued an order for police to set up CCTV cameras across the country. The project which is said to cost Shs 458 billion began to see light in June 2018 when Huawei Technologies Ltd was contracted. The ministry of Finance has so far released Shs 60 billion for the implementation of the first phase of the project.

+4 #1 Kelly 2018-10-10 08:25
I like the bravado with which the president is chest thumping. Some time back Gwok asked a question which remained unanswered: “Do we know the killers?”

What if they are the people in security manning these very cameras? Anyway, I am only waiting for Emilian Kayima to earn his bread with such statements as “the data of the scene of crime for that day and time is missing. However police IT experts are doing everything to retrieve it”.

When the then attorney general Hon. Francis Ayume “was dead” (note that I deliberately didn’t use died) in a “road accident” at Kakooge along Kampala-Gulu high way, we were forced to buy cheap and weak so called seat belts because to government Ayume died because of not wearing a seat belt.

After 3 weeks someone had made a fortune out of the seat belts and we were back to square one. I only imagine how someone in the first family is smiling all the way to the bank with these street cameras’ deal.
Report to administrator
+5 #2 gwok 2018-10-10 09:55
what does this really mean in terms of free movement of people in general and in particular of those who think they are next in the line of bullets?

I presume that they be directed to keep under the cameras. What if the assassins are the same people who will monitor those camera outputs?

What if the camera operators would share that output with the assassins? [there is no guarantee about that, given the level of corruption tendency in the country]. etc ???

My initial conclusion are: (a) It is a futile money-wasting initiative. (b) the possibility of the assassins using those cameras to follow their intended victims is real. The guys have run out of ideas in deed, as JPAM once said on his way out.
Report to administrator
+4 #3 Concerned Ugandan 2018-10-10 11:18
Any security system's weakest link will always be the people running the system.

M7 as usual misses the point completely and disregards decades of incompetence and corruption in the police and intelligence services and goes for a security system which does nothing to cure the core inefficiencies of his government!
Report to administrator
+2 #4 gwok 2018-10-10 12:13
Quoting Concerned Ugandan:

Any security system's weakest link will always be the people running the system.

M7 as usual misses the point completely and disregards decades of incompetence and corruption in the police and intelligence services and goes for a security system which does nothing to cure the core inefficiencies of his government!

Actually, those cameras may not be to safeguard us from those "assassins", more likely rather to monitor troop movements in case any part of the military has an idea towards a coup against the regime. It matters a lot where those eyes are stationed, doesn't it?
Report to administrator
+2 #5 Jama 2018-10-10 19:42
These cameras are intended for regime protection and monitoring opposition activities,like demonstrations or other movements.

Otherwise the killers are not far,from them.
Report to administrator
+1 #6 rubangakene 2018-10-10 22:03
The government created these criminals in the first place by disenfranchising the majority of Ugandans from the so called wealth.

Ignorance, poverty and disease is rampant all over the country compared to the sixties and the seventies.

How will CCTV solve crimes in the villages and rural areas? How about the mother of all crimes (CORRUPTION), what will CCTV help to collar these white collar criminals in big places, eh! This is some joke.
Report to administrator
-2 #7 Wainanchi 2018-10-11 12:52
Congratulations president Museveni and NRM government. Excellent move and outcome and question why was it not done before?

Maybe budgetary constraints but security is of paramount importance we shall all agree.

For unbelieving Thomases just to tell them to go to London and and other places in UK and at every step of your way you will smile CHEESE to cameras installed everywhere,just everywhere.

This has helped The United Kingdom to phase out terrorists and to put them behind bars.I pray and hope that Uganda security will catch and punish those pigs and killers behind the bars forever,and I mean ,forever .

I enjoyed watching our good man president Museveni smiling and being happy with what has been achieved! A