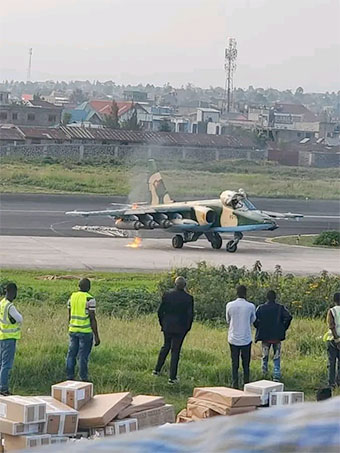 Rwanda government has confirmed that it shot a warplane belonging to the Democratic Republic of Congo (DRC) for violating its airspace.

On Tuesday, a video circulated of a projectile shooting a Sukhoi-25 fighter plane. Other videos and pictures also circulated of Armed Forces of the Democratic Republic of Congo (FARDC) soldiers putting off the fire using firefighting vehicles at Goma airport.

Later, Rwanda released a brief statement confirming that its soldiers shot at the plane. In a statement, released by the office of the government spokesperson, Rwanda claims that the plane crossed from its airspace of Goma to Rubavu in Rwanda.

Rwanda says that it shot at the plane in form of defensive measures since this was the third time, DRC was committing the same aggression. Rwanda also asked DRC to stop the aggression.

“Today [Tuesday] at 5:03 pm, a Sukhoi-25 from DR Congo violated Rwanda airspace for the third time. Defensive measures were taken. Rwanda asks the DRC to stop this aggression,” reads the statement.

DRC also released a statement condemning Rwanda and denouncing the attack on its fighter plane by the Rwandan army with claims that it was in Congolese airspace. According to the statement, the fighter plane was attacked while it began its landing at Goma international airport. The statement adds that the plane landed without major material damage.

“The Government of the Democratic Republic of Congo strongly condemns and denounces the attack on its fighter plane by the Rwandan army in Congolese airspace and does not intend to let it go. This fighter plane was attacked while it began its landing on the runway of the international airport of Goma. The Rwandan fire was directed at a Congolese aircraft flying inside Congolese territory. It did not fly over Rwandan airspace.

The aircraft landed without major material damage. This attack is in addition to the offensive launched this morning by the Rwandan army towards Kitchanga and immediately repelled by the Armed Forces of the Democratic Republic of Congo (FARDC),” reads part of the statement.

This is not the first time Rwanda accuses DRC of violating its airspace. In December 2022, Rwanda claimed that another fighter jet from DRC had briefly violated its airspace. A Congolese warplane also briefly landed at a Rwandan airport in November 2022 while on an investigation mission near the border, in what Congo argued was by accident.

Tuesday’s incident happened on a day when heavy fighting between FARDC soldiers-militia coalition and the March 23 Movement (M23) rebels resumed in Bishusha, Bwiza, Ngesha and Bishakishaki, Bambo, Kishishe, and Kitchanga localities straddling the territories of Masisi and Rutshuru. Detonations with heavy and light weapons were also heard even in the city of Kitshanga, causing panic among the population according to Tobi Tobolwako Kahangu, a local resident.

According to Kahungu, M23 rebels are targeting to cut off the Kitchanga-Goma road from the locality of Burungu. Last week, a section of civil society activists held a demonstration in Goma demanding FARDC to resume assault against M23 rebels.

In continued tensions between Rwanda and DR Congo, Rwanda reported that DR Congo's fighter jet violated their airspace for the third time in recent months.

0 #1 Lakwena 2023-01-25 18:29
In other words, Rwanda is by hook or crook, hell-bent on provoking a war with DR Congo, so that: its army will have the justification to join forces with the M23 (the enemy within), into running (take) over the Mineral-rich Eastern DR Congo, and into seceding from the Kinshasa.

These are Rwandese refugees as those ones Britain wants to dump from the UK into Rwanda!
Quote | Report to administrator
Refresh comments list
RSS feed for comments to this post
Add comment