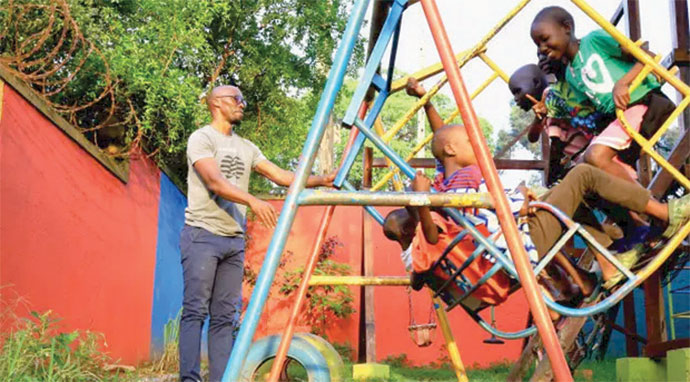 he Bless a Child Foundation provides shelter, food and transport to children and adults with cancer, to prevent treatment abandonmen

At the country’s main cancer treatment centre, the sick used to sleep outside.

They had no choice: Uganda has just three such clinics for people with cancer and a population of 47 million. Uganda Cancer Institute (UCI), a government-run facility in the capital, Kampala, offers heavily subsidised care.

Typically, it’s the only option for the majority of patients, who arrive from the countryside or from towns many miles away. Without money to pay for a hotel or the fare to get home between rounds of chemotherapy or radiotherapy, patients would camp out on the hospital’s concrete veranda – sometimes for months.

In September, the UCI set up a free shelter for adult patients and their families. So far, the housing is just a tent with mattresses, but it’s having a major impact on patients – whose chances of recovery were not helped by having to sleep outside.

Amos Obote, who heads the programme, said before the shelter opened, on average one cancer patient was dying each day at UCI’s Kampala hospital. Today that figure has dipped to about two deaths a month. The government plans to turn the tents into permanent structures by the end of 2023.

“We learned that cancer treatment is not just about ‘treatment’,” says Obote. “If you are to establish a cancer hospital in any low-income setting, you must prioritise caregiving, too, or you will achieve nothing.”

When patients slept on walkways and verandas outside the hospital, they would expose themselves to other diseases, he says. “Some die of malaria and typhoid, rather than cancer.”

The government shelter was inspired by local charity, the Bless A Child Foundation (BCF), which has been running similar programmes for children with cancer. The new government shelter serves adults and children. Free housing addresses a major problem that devastates the chances of recovery for many across the developing world: early abandonment of treatment.

Of the 4,187 cancer patients admitted to UCI in 2017, less than a quarter completed their treatment. Although the medical care is almost entirely free, Ugandans on low incomes often stop treatment in any case because they can’t pay for housing or transportation to a hospital far from their home.

Two-thirds of the approximately 3,000 children who develop cancer in Uganda each year die without ever going to hospital, according to Dr Barnabas Atwine, who led the 2020 study.

“Most of the children are brought to hospital late, hence their low chances of survival. But even when they are brought on time, the biggest challenge is that many parents and caregivers abandon treatment midway,’’ says Atwine.

The shelters have been shown to reduce the abandonment of treatment by alleviating the financial burden. After one BCF shelter was opened near a Mbarara hospital in 2020, treatment abandonment fell from 30% to 9%.

“Cancer treatment is extremely expensive and challenging. When you go to the shelter and see some of these children, they would not be alive otherwise. They would not have afforded to stay in the city for treatment,” Atwine says.

Already, the new shelter has become a critical lifeline for Uganda’s poorest. They include Peter Stuart Ofrywrtyh, who has been dealing with Kaposi’s sarcoma, a rare cancer, for a year. UCI recently discharged him and advised him to return in six months, but Ofrywrtyh couldn’t afford transportation to his home 196km (121 miles) from Kampala. His only solution was to stay in the shelter and repair shoes for money until he could afford the fare.

“Having a shelter inside the tents is heartwarming. Even though I can’t find money to return home yet, I am not worried about sleeping on verandas and being exposed to mosquito bites and diseases,” Ofrywrtyh says.

Uganda’s cancer shelters would not exist if it weren’t for Brian Walusimbi. In 2007 Walusimbi, a professional clown, was invited to the UCI to perform for children with cancer at a Christmas party.

“I saw children and adults packed in one small room with tumours that had disfigured their faces. It was such a painful space to be in. I decided I had to do something,” Walusimbi says.

Walusimbi used his entertainment events to raise money for treatment but grew discouraged as he saw children still succumbing to cancer.

“We discovered the problem was not the treatment,” he says. “We were raising enough money for about 10 rounds of chemotherapy, but the kids were only appearing for two. They didn’t have transport from their villages to the treatment centre. Even after the chemotherapy, they would sleep on walkways, with no food.”

That’s when Walusimbi and a group of friends decided they would focus on providing comfortable shelters and decent meals for the children and their caregivers. In 2010, they founded BCF and transformed an abandoned student hostel in Kampala into the country’s first cancer shelter.

Today, BCF has four homes; two in Kampala, one in Mbarara, and one in Gulu. More than 100 children and their caregivers are housed in BCF facilities, which have expanded to provide meals, an in-house teacher, psychosocial support, and transport to and from the hospitals on treatment days. The BCF homes have served more than 6,000 children, Walusimbi says.

Piracel Goretti’s seven-year-old daughter is among them. After several wrong diagnoses at local health centres in her hometown of Zombo, Goretti was advised to travel 400km to Kampala, for treatment at UCI. Goretti, who works at a cafe and whose husband recently lost his job, couldn’t afford to stay in the capital.

“I was approached by a nurse who told me about a home that could support us during our stay,” she says, recalling her surprise at arriving to find a meal and a comfortable bed.

“We have similar stories here. We sometimes have counselling and sharing sessions. When you hear other people’s stories, you feel better. You learn that you are not alone,” says Goretti.

One of BCF’s first beneficiaries was Henry Mukangula. He spent much of his childhood in the Kampala shelter, leaving in 2020 when he was clear of cancer. He now works as a DJ and every Friday evening he still goes to the Kampala shelter to play music for children like him.

“I don’t have a lot to offer to these children, whose position I was in for years,” Mukangula says. “I can only play them music at least to brighten their day for a minute, to make them forget the syringes and tablets.”

From The Guardian, UK.